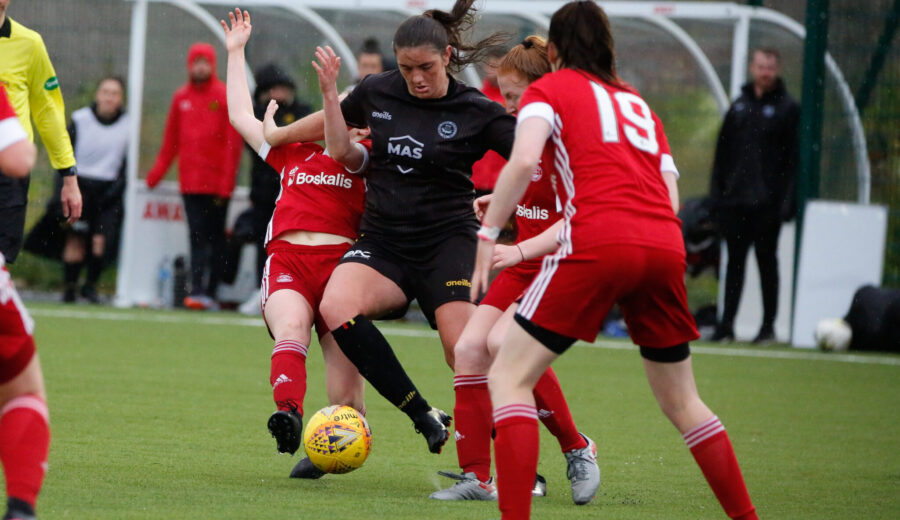 A long trip to Aberdeen represented the antepenultimate game of the season for Partick Thistle Women’s FC as they looked to close the gap to the automatic promotion spots in the SWPL 2.

The Jags travelled north with three points between them and Hamilton in second place while table-topping Aberdeen sat five clear of Brian Graham’s side.

There was one change made to the side that beat Striling University 6-0 at the weekend with Teigan McCann making way for Colette Fleming in the midfield.

On a windy evening at Cormack Park, the game started in a bitty fashion with neither team really dominating proceedings.

Thistle’s first sight of goal came when Emma Craig’s free kick fell to Cheryl McCulloch in the box via an Aberdeen head, however, as she tried to poke the ball past the goalkeeper the assistant’s flag went up.

Craig’s set pieces proved useful again when her corner kick found Taylor McGlashan in the centre of the box but the defender only managed a glancing touch as her effort skipped wide.

The hosts had their first clear-cut chance of the match when an Anna Vincenti goal kick was headed back towards the Thistle box and Bayley Hutchison broke onto it. The number 10 looked to beat Vincenti at the near post with her left but the Jags ‘stopper turned it away with relative ease.

After Clare Docherty was fouled at the edge of the home side’s box Jade Gallon was given the opportunity to take aim from the resulting free kick. Gallon sent a powerfully struck shot goalwards but saw it saved comfortably by Gail Gilmour who gathered at the second attempt.

The league leaders were dealt a considerable blow shortly before half-time when Kelly Forrest was given a straight red card. The dismissal came as Sophie Gallacher’s pass found Clare Docherty near the Aberdeen penalty area and Forrest toppled the Jags number eight as she sought to enter the 18-yard area. The referee brandished the red following a brief consultation with his assistant despite the complaints of Forrest. The subsequent free kick was dragged wide of the target by Sophie Gallacher.

The blistering winds continued as the second half got underway and just five minutes after the restart, Aberdeen took the lead. A quick turnover of possession in the midfield led to a well-weighted pass in behind the Thistle defence which the pacey Bayley Hutchison ran onto. The SWPL 2 top scorer stepped into the box and confidently finished low across goal to give the Dons the advantage.

Shortly thereafter, the visitors were caught out again and Aberdeen doubled the lead. Anna Vincenti’s goal kick didn’t get the desired height or distance and ended up going straight to Hutchison who once again strode towards goal before rounding the goalkeeper and finishing into the empty net.

The Jags tried their best to get back into the match but a resolute Aberdeen defence limited Thistle’s opportunities and did enough to see out the 2-0 victory. The result moves the Dons a step closer to securing top spot while it makes promotion very difficult for Brian Graham’s team who must now prepare for a fixture against Queen’s Park at Lochburn Park this Sunday.