Turnstiles are located in Hilton Road, behind and adjacent to KFC

There is a communal disabled area under the main stand, which offers cover from inclement weather.

Car parking is available in Morrisons and town centre car parks.  There is no charge.

Our audio commentary service, JagZone LIVE, will be broadcasting from the Indodrill Stadium as Partick Thistle look to start the ’20s with three points. 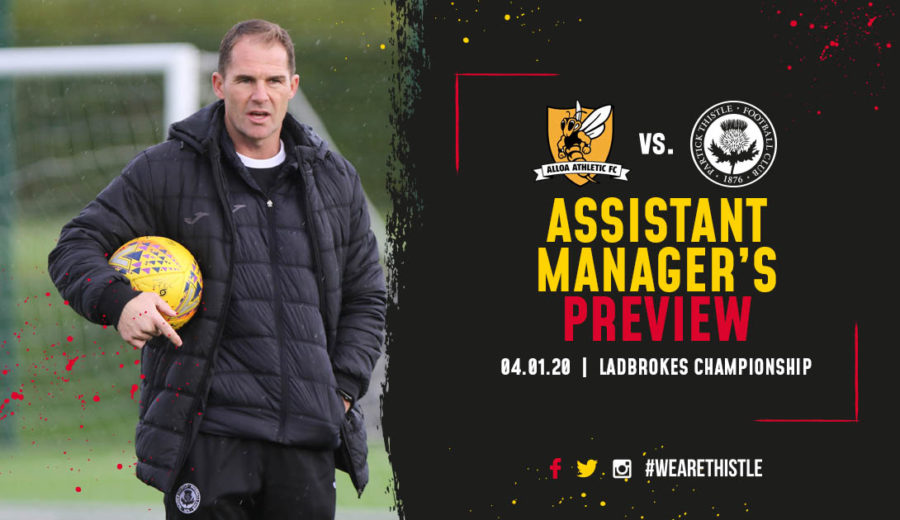 Having ended 2019 with a win, Partick Thistle are aiming to start 2020 in a similar vein as they travel to the Indodrill Stadium to take on Alloa Athletic this weekend. The Jags moved out of the bottom two with a victory at Cappielow last week and now hope to put some space between themselves and any relegation danger as they take on the Championship’s bottom side who managed an impressive away win of their own last time out. Jags assistant, Alan Archibald, spoke to ptfc.co.uk ahead of the game:

“It was great to go into New Year’s with that win over Morton. The lads were outstanding and it was definitely one of our best performances this season, particularly in defence. We kept them at bay for most of the game and the only times they really threatened were set pieces.”

Thistle came out and hit the front early against the Ton, scoring the opener after just five minutes and Archie hopes they carry that sort of attitude into the match against Alloa.

“It was great to see and I think it’s because they’re on a good run. We were really disappointed to lose the game against Dundee but it was a tight game and we’ve won every other game in December so the boys have got that belief which so you saw from the start at Cappielow.”

Alex Jones has grasped his chance with two hands since returning from injury last month and with two goals in his last three, he’s added an extra dimension to the Thistle attack which Archie is delighted with.

“He’s taken his goal really well and from the management team’s point of view, we’re really happy with what he’s brought to the team outwith just the two goals. He’s given us a real focal point up top and has given Kenny a bit more freedom to work in between the lines. It seems that the formation we’ve moved to really suits the players including Alex.”

The former Thistle defender then touched on the extension of Reece Cole’s loan deal and the importance of the number 12 in the Jags’ midfield.

“We’re disappointed that Osman Kakay was called back by QPR because we wanted him to stay but we’re over the moon that Reece’s extension got over the line. He’s been in really good form and his goals and assists have been very important.

“He’s built a good partnership with Stuart Bannigan over the last few weeks and they complement each other really well so to have him here for the rest of the season is brilliant.”

A healthy away support cheered the Jags on at Cappielow last week and another is expected at the Indodrill this weekend and Archie is hopeful the team can give the fans another memorable away win.

“We’ve had great backing, especially on away days and it was great to win both the away games last month. In both games the players celebrated the winner with the fans and you could really see what it meant so hopefully we get more of that tomorrow.”

A more in-depth interview with Alan Archibald, as well as a chat with Alex Jones, is availabe to JagZone subcribers now – log in to see them. 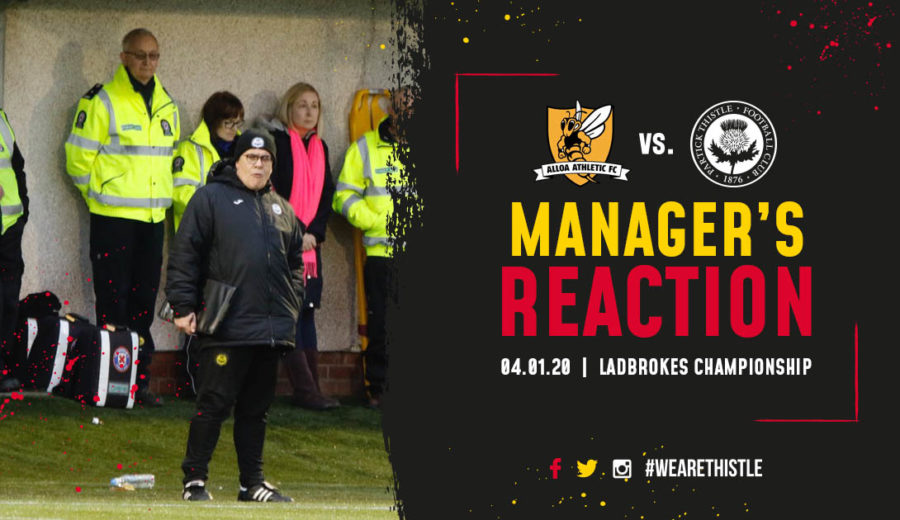 2020 began in Clackmannanshire for Partick Thistle as they travelled to take on Alloa Athletic at the Indodrill Stadium in a game which was full of drama, particularly in the second half. A deflected Adam Brown shot beat Scott Fox to give the hosts the lead just after the hour mark but Thistle had a golden opportunity to equalise just ten minutes later as Robbie Deas was penalised for a handball in the box. However, Stuart Bannigan saw his spot kick saved by Jamie MacDonald who was having a mammoth game for Peter Grant’s side. With that, it seemed the away side’s best chance to level might have past but two minutes later, David Munro was pointing at the spot again as Joe Cardle was tripped by Blair Malcolm. Bannigan put himself forward again and this time he made no mistake as he restored parity from 12 yards. That was all in terms of scoring as these teams battled to their third 1-1 of the season and Thistle remained four points clear of Alloa. Jags boss, Ian McCall, spoke to ptfc.co.uk following the final whistle:

“We’re disappointed with the draw. We’ve dominated the game and had the bulk of the attacking threat but their goalkeeper’s pulled off few magnificent saves and earned them a point really. The goal that Alloa scored takes a deflection off one of our players to loop into the net otherwise I think it is a straightforward save for Scott Fox. We were on top for most of the game but we have to take our chances and we didn’t do that.”

Thistle were awarded two second half penalties in quick succession and after missing the first, Stuart Bannigan stepped up to score the second and McCall was pleased to see that bravery from the day’s captain.

“That’s the type of player Banzo is. It takes a lot of courage to step up to take a penalty after you have missed your last one, never mind the fact it was a couple of minutes apart. He believes in himself and even after missing the first one, I completely trusted him to go and score the second. Overall, he’s really improved in the last month or so and he’s a key part of this side.”

Tam O’Ware missed out through illness but the gaffer doesn’t expect the Jags number four to be missing for too much longer.

“Tam was ill today but I thought we did well defensively today.  We’ll monitor how Tam is feeling but I think he will be back in training for the start of the week.

The Jags were pushing and pushing towards the end of the game but just couldn’t find a winner and the gaffer felt his team should have done better considering the positions they got themselves in.

“We were right on top of them towards the end but we struggled to create much after the equaliser. We were getting in down the wings and getting crosses to the box but it was always falling to the defenders or going out of play so there’s still some work to do in that regard.”

With a handful of departures last week there are spaces to be filled this month in the squad and the manager says he’s working hard to get deals done.

“It’s always a bit slow at the start of the month because lots of teams want to take stock of what they have before they allow for movement but still we’re trying to make moves happen. We need to strengthen the squad and we’ll hopefully have more to report soon.”

Finally the gaffer had a message for the Jags support that made the trip to Clackmannanshire.

“It was another tremendous turnout from our fans. They got right behind the side and kept pushing us on, it just wasn’t to be for us getting the winner in front of them which would have seen half the ground going absolutely mental.”

A more in depth video interview with Ian McCall is available to Jagzone subscribers now as well as reaction from Sean McGinty – log in to view.