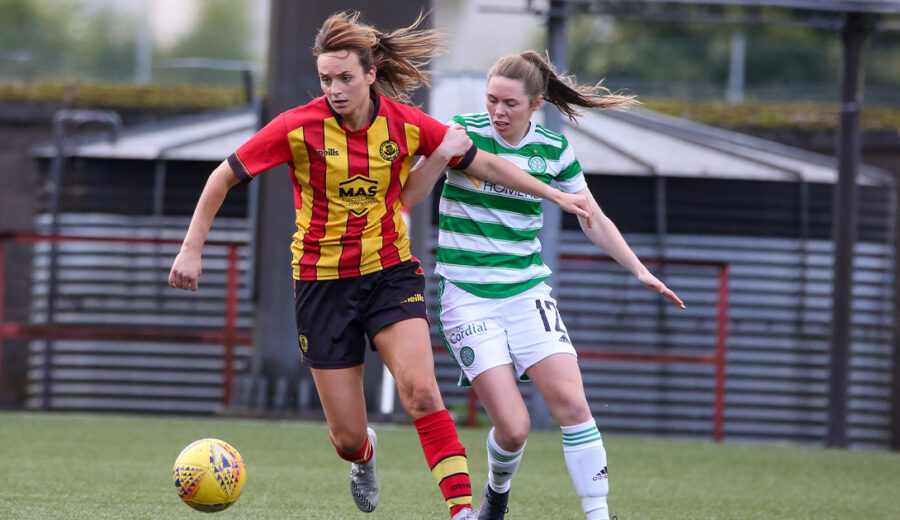 Having run Glasgow City so close in midweek Thistle found, on this occasion, the fitness and quality of their full-time professional opposition just a little too hard to handle.

Manager Brian Graham was denied the opportunity of selecting loanees London Pollard, scorer of the Thistle goal against Glasgow City, and Summer Christie and in total made a total of three changes to face a free scoring Celtic side.

Into the starting eleven came Ellie Vernal, Cara McBrearty and Cheryl Rigden as the aforementioned Pollard, Kim Murphy and Amy Bulloch missed out.

There were warning signs that this might prove to be a long afternoon for Thistle as early as the first minute when a ball lifted over the top of the Thistle defence found Wellings but with only McGregor to beat she fired over the bar.

As much as Celtic were the better side from the very start it was Thistle that had the ball in the back of the net for the first when Cheryl McCulloch was able to apply a close-range finish after Rigden had pumped a free kick deep into the Celtic box. It is impossible to say what impact it would have had on the game had McCulloch’s goal stood and not been disallowed for an infringement, but it would certainly have given Thistle to build upon.

As it was, they found themselves trailing just three minutes later.

Thistle were sliced open through the centre of their defence and this time when presented with the opportunity of scoring when one on one with McGregor, Wellings made no mistake.

A Donaldson header flew wide of the Thistle goal as Celtic pressed for a second goal but at this point Thistle were still in the game and weren’t too far away from an equaliser after 21 minutes.

McBrearty was able to collect a McCulloch pass on the left-hand side before advancing downfield. From wide on the left she sent over a cross that Docherty glanced a header narrowly wide of goal.

After 32 minutes though Celtic had the comfort of a two-goal lead.

Vernal was penalised for a foul at the edge of the box, for which she collected a yellow card, and from the free kick that followed Donaldson found the bottom corner of the Thistle net.

To have any chance of retrieving something from this game it was essential that Thistle kept the deficit to at most two at half-time but with the interval three minutes away they scored the third goal that effectively put the game beyond the reach of Thistle.

The third Celtic goal was near identical to that of the first with a ball through the heart of Thistle defence finding Wellings who claimed her second goal of the afternoon with a composed finish.

Brian Graham made a trio of changes at the interval with Taylor McGlashan, Danica Dalziel and Amy Bulloch replacing Ellie Vernal, Freya MacDonald and Cheryl Rigden.

For a spell those changes did go some way to stemming the Celtic tide with Thistle defending resolutely albeit without carrying much threat of their own.

Just past the hour mark though Celtic netted their fourth goal.

McGowan looked to be fouled in the build up to the goal but with the referee allowing play to continue the ball was worked wide to the Celtic right where a cross was met by the head of Wellings who duly completed her hat-trick.

A Donaldson shot smacked off the crossbar as Celtic began to overrun a visibly tiring Thistle side. The Thistle cause wasn’t aided any by an injury to McGregor who although able to continue after picking up an injury, clearly had some issue with her mobility.

Even still the fifth and sixth goals that came Celtic’s way in the closing stages were a little harsh on Thistle.

Olafsdittir Gros netted with a powerful shot from the edge of the box after 84 minutes before the scoring was completed by Shen with three minutes of the game remaining.