Thistle, tomorrow night take a six game unbeaten start to the season into a Scottish Communities League Cup tie with fellow First Division side Hamilton Accies. It’s a match that Thistle manager Jackie McNamara is very much looking forward to.
“It’s a big game for us and one that both teams will be desperate to win. Get through this round and there is the potential to get a game that would bring in some much needed funds in the next round. I think we would relish a chance to play against a side from the SPL but Hamilton will feel exactly the same.”
“The lads have done really well so far this season and we really want to keep our run going. We’re especially keen to do well in all the cup competitions this season as we suffered some real disappointments in the cups last season, including at Hamilton in the Ramsdens Cup. We lost that game to a dodgy decision late in the game and that was something that we felt aggrieved about.”
The manager, however, will be denied the opportunity to field the same side for the third game running.
“Hugh Murray is suspended after being sent off at Forfar in the last round. It’s a bit of a pain that Hugh won’t be available tomorrow night, especially given the circumstances surrounding the red card which we didn’t think was a red card offence.”
“Elsewhere David Rowson obviously will miss out again and we’ll need to wait on Alan Archibald who was feeling a bit of pain after Saturday’s game. We think he should be okay though. As should Sean Welsh, who took a kick to his foot during Saturday’s game. We took him off on Saturday largely as a precaution as the game was well on the way to being won at that point. That was the reason too that we took Steven Lawless off on Saturday. Steven had been unwell at the start of the week and was starting to feel a little tired. We thought it was the right thing to take him off and keep him fresh for tomorrow’s game and that was part of our thinking with Kris Doolan as well.”
Partick Thistle Stats
Current Form – Last Five Games
W            D             L              F              A
5              0              0              14           6
Scorers Season 2012-2013
Kris Doolan 4
Chris Erskine 4
Steven Lawless 3
Stuart Bannigan 2
Christie Elliott 1
Aaron Sinclair 1
Last Game
Irn-Bru Scottish League First Division
Saturday August 25th 2012
Partick Thistle 3, Dumbarton 0
Hamilton Accies Stats
Current Form – Last Five Games
W            D             L              F              A
1              1              3              3              5
Scorers Season 2012-2013
Ali Crawford 1
Darian MacKinnon 1
Jon Routledge 1
Last Game
Irn-Bru Scottish League First Division
Saturday August 25th 2012
Cowdenbeath 1, Hamilton Accies 0
Last Meeting
Irn-Bru Scottish League First Division
Saturday May 5th 2012
Hamilton Accies 2, Partick Thistle 2
Teams
Hamilton: Currie, McAlister, Kilday, Gillespie, Mensing, McLaughlin, Routledge, Redmond (Spence), McShane, Kirkpatrick (MacGregor), Longridge (Ryan).
Thistle: Fox, O’Donnell (Rowson), Bannigan, Robertson, Balatoni (Burns), Archibald, Welsh, Paton, Doolan, McGuigan, Erskine.
Scorers
Hamilton: Redmond (25), McShane (30)
Thistle: Bannigan (34), Welsh (43)
Crowd: 1,978
Match Details
Scottish Communities League Cup Second Round
Hamilton Accies v Partick Thistle
Kick-off: 7:45pm
Directions to New Douglas Park
Prices
Adults £12
Concessions £6
Match Officials
Referee: Stevie O’Reilly
Assistant Referees: Brian McGarry and Raymond White
Fourth Official: Euan Anderson
Other Fixtures
Scottish Communities League Cup Second Round
Livingston v Dumbarton
Ross County v Raith Rovers
Kilmarnock v Stenhousemuir
Queen of the South v Hibernian
Dunfermline Athletic v Montrose

Thistle’s interest in the Scottish Communities League Cup ended this evening with an extra-time defeat at the hands of Hamilton Accies.
On a perfect night for football and on an immaculate playing surface both teams made a bright and open start to the game. The first chance was Hamilton’s in the second minute but Longridge’s effort was straight at a well positioned Scott Fox. Hamilton continued with their bright start and a cross from the left found Ziggy Gordon in space at Thistle’s back post but the right back was off balance and sent his effort over the bar.
Thistle’s first serious assault on the Hamilton goal nearly produced the game’s opening goal. Aaron Sinclair’s cross found Chris Erskine and his deflected effort looked destined for the corner of the net only for Kevin Cuthbert to turn the ball round the post for a corner.
Cuthbert was certainly the busier of the keepers in the first half. Twice he produced fine stops to prevent Kris Doolan from adding to his tally of early season goals. His best save of them all though was reserved for a Sean Welsh header. Aaron Sinclair swung over a magnificent cross from the Thistle left that Welsh dived full length to reach with his head. Cuthbert too was a full stretch and he again managed to deflect the ball away from his goal.
The football that Thistle were producing at times was extremely pleasing on the eye and all it lacked in the opening 45 minutes was a goal to show for it all. Thistle’s pace on the counter attack in particular was a real threat and in one such thrust Stephen O’Donnell, after collecting a pass from Stuart Bannigan, burst into the box only to send his shot over the bar.
As much as Thistle were dominating proceedings it wasn’t all one way traffic either, although Scott Fox was never too pressed in his efforts to keep the ball out. On the one occasion that he did look as if he was struggling, Ali Crawford’s well struck shot from 20 yards cleared the crossbar.
If Thistle had dominated the first half then there was a more purposeful look to Hamilton after the interval. Indeed in the 65th minute they missed the best chance of a goal to that point. There was no flag for offside when substitute Keatings burst clear but even when left with just Scott Fox to beat he never looked confident and certainly lacked composure as he lashed his shot over the bar.
It could have proved to be a costly miss as two minutes later Thistle were denied a goal only be the heroics of the home goalkeeper. Christie Elliott, on for Steve Lawless, was able to flick on a Stuart Bannigan corner and it took a magnificent reflex save from Cuthbert to prevent Kris Doolan’s header from finding the net.
That was the closest either side would come to a goal inside the 90 minutes with the game despite the energy and commitment shown by both sides the tie went into extra-time.
We were into the second period of extra-time when the game finally had a goal. Ali Crawford’s long range effort flying past Scott Fox and into the net.
Thistle immediately sent on Mark McGuigan for Sean Welsh and his first involvement in the game was to touch the ball back to Christie Elliott who dragged a shot wide of target.
There was still fight in Thistle and Stephen O’Donnell saw his shot from the edge of the box graze the Hamilton crossbar.
An Aaron Muirhead free kick that evaded the wall but not the Hamilton keeper was Thistle’s last effort in a game that they gave everything in. 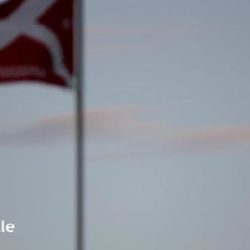 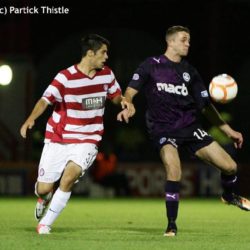 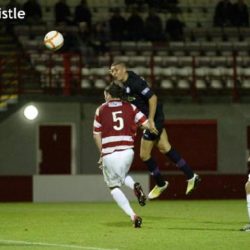 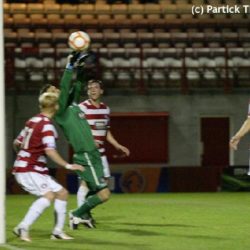 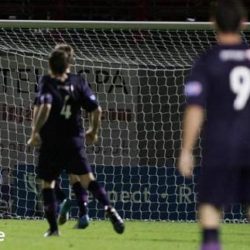 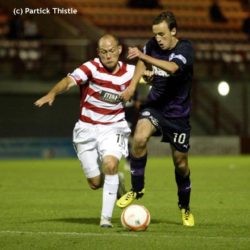 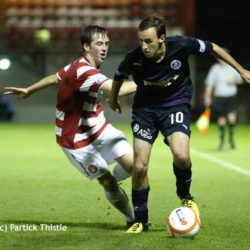 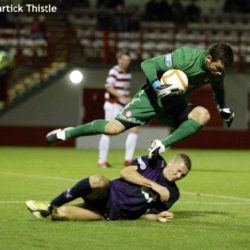 Although it was inevitable that we would suffer a defeat at some point, that fact didn’t lessen the pain of losing to Hamilton in the Scottish Communities League Cup on Tuesday night. It was a naturally bitterly disappointed Jackie McNamara that [link:HOME] spoke to after the game.
“I don’t think that we deserved that. I thought that we were the better team. Their goalkeeper had a good night and it just wasn’t our night in front of goal. It’s disappointing to lose but it did take something special to beat us. I can’t fault the players for effort and the desire was there but it just wasn’t our night. Our goalkeeper has hardly had anything to do all night apart from pick one out the net and that’s very frustrating.”
“I didn’t think that we started the game that well. After the first 5 or 10 minutes though I thought that there was only one team in the game. Second half we were guilty of not passing the ball as well as we did in the first half and were a little bit too direct in how we played at times. First half we were creating chances by passing and moving. We’re disappointed but we just need to get our heads up and look forward to Saturday now. It’s a massive game for us and we need to make sure that we go about things in the right way. ”
Jackie continued;
“We would like to have done well in this competition. The league is perhaps more important long term but this was a tie that I was really looking to get through. I feel for the fans who were fantastic tonight. They gave us great support throughout the game and it would have been nice to able reward them by getting through and getting a good tie in the next round. It wasn’t to be though and we need now to focus on Saturday’s game. With the game going into extra-time there is sure to be some tired legs but we’ll start preparing for it on Thursday.”
Hamilton manager Billy Reid was naturally a bit more upbeat after the game.
“It was a tough game and Thistle are a good side. You can see why they had won six games on the bounce. They play 4-3-3, have legs all over the park and two full-backs who really bomb on . We are a young side and a big difference for me was the fact that I had my captain Alex Neil on the park for 90 minutes. We’re trying to find a bit of stability and I’m missing my experienced players on the park. The young players need the likes of Alex Neil out on the park. We played him at the back tonight and I thought he was outstanding.”
“The goal that won the game was fit to win any game and the finish was absolutely sublime. I can’t ask any more of our young squad. They dug really deep tonight . 120 minutes with a clean sheet is a big step in the right direction. We’re looking for league points now and we know that Saturday’s game is going to be tough, the players have played 120 minutes at a decent pace, but we’ll just pick ourselves up and go again.”