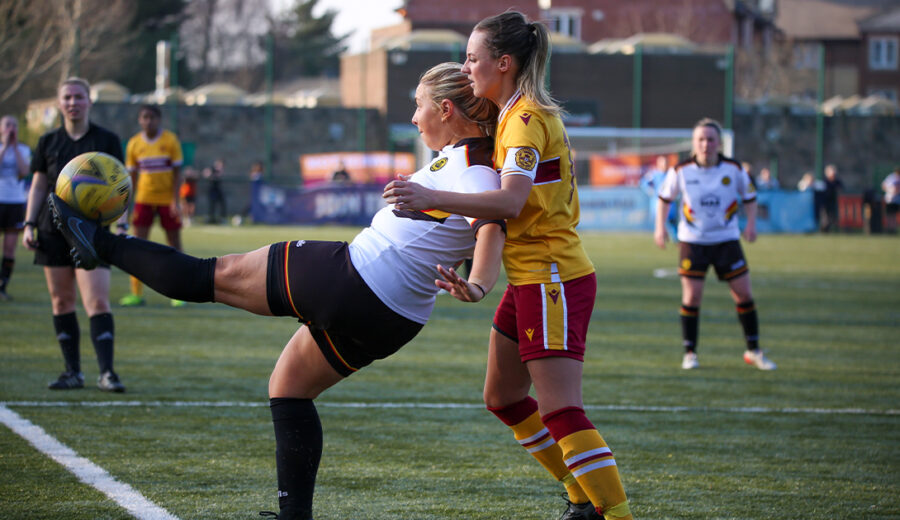 Matches with Motherwell this season have had a bit of everything. Dramatic injury time equalisers, a penalty shoot-out and goals aplenty; 13 in total from the previous three encounters. A further six were added to the total following another thrilling clash between the two teams.

There was an early chance for Motherwell when Pollard was able to get in between Murphy and McCulloch but could only lift the ball over McGregor’s crossbar.

Thistle took full advantage of that reprieve and took an early lead.

Duff in the Motherwell goal was unable to deal with a McBrearty free kick from wide on the Thistle right with Docherty first to react to the loose ball. Although Docherty her back to goal she drew a rash challenge from a defender earning Thistle the chance to take the lead from the penalty spot.

It was Cara McBrearty that was entrusted with the spot kick and she made absolutely no mistake with a powerful low effort into the corner.

That early goal though wasn’t the prelude to a period of Thistle dominance as Motherwell reacted well to falling behind. McGregor had to be well placed to save a well struck Inglis effort and Pollard was just a shade too high with her shot after having created an opening for herself with some skilful footwork.

The game’s next goal though was a Thistle goal.

Demi Falconer’s free kick from just inside her own half was flicked on by Cheryl McCulloch and Linzi Taylor, who only played after passing a late fitness test, was there to apply the finish.

Thistle, however, were unable to take that two goal advantage into the dressing room at half-time with McDonald-Nguah firing home a cracker from the edge of the Thistle box almost right on the stroke of half-time.

That goal changed the complexion of the game giving Motherwell renewed hope and within four minutes of the restart they were level when Inglis found the net with a free kick on the left hand side.

Motherwell well and truly had their tails up at this point and a Pollard cross found Gardner at the back post after 61 minutes but she sliced her shot horribly wide of goal.

A minute later though and Motherwell were in front.

It was another set piece goal that proved to Thistle’s undoing. McDonald-Nguah finding the net for the second time in the game though this time her free kick, although well enough struck, really shouldn’t have found the back of the Thistle net.

The Thistle response to falling behind was pleasingly rapid. Teigan McCann had only just come on as a substitute from the injured Colette Fleming when she was in the right place at the right time to profit from a spill from Duff to once again tie the scores.

Despite their best efforts neither side were able to find the winner before the referee blew the whistle to signal the end of a thoroughly entertaining game of football.