*supporters under the age of 16 can apply for a free season ticket at the Jackie Husband Stand ticket booth before the game.

Away fans will be housed in the north end of the Jackie Husband Stand entering the stadium via turnstiles 40 and 41 only.

There is a cash gate for Alloa Athletic supporters and a card payment option will be available at the Jackie Husband Stand ticket booth.

Our audio commentary service, JagZone LIVE, will be providing full audio coverage as Thistle look to extend their winning run to four games against Alloa Athletic.

The build-up to the game with our commentary team will begin at 7:30pm, 15 minutes ahead of kick-off. 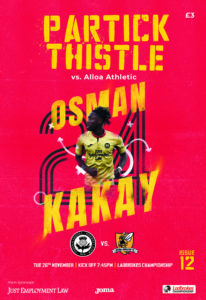 It’s Tuesday night football at the Energy Check Stadium at Firhill as Partick Thistle take on Alloa Athletic in the Ladbrokes Championship. 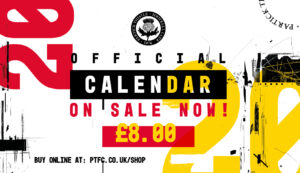 The 2020 Partick Thistle Calendar is now on sale and will be available to purchase from the old programme stall in the Jackie Husband.

Priced at just £8 stock is limited to don’t miss out.

It will be Ian Cameron performing the half-time draw at the Energy Check Stadium at Firhill.

As this match is a midweek fixture, there is no PlayerZone after the match. 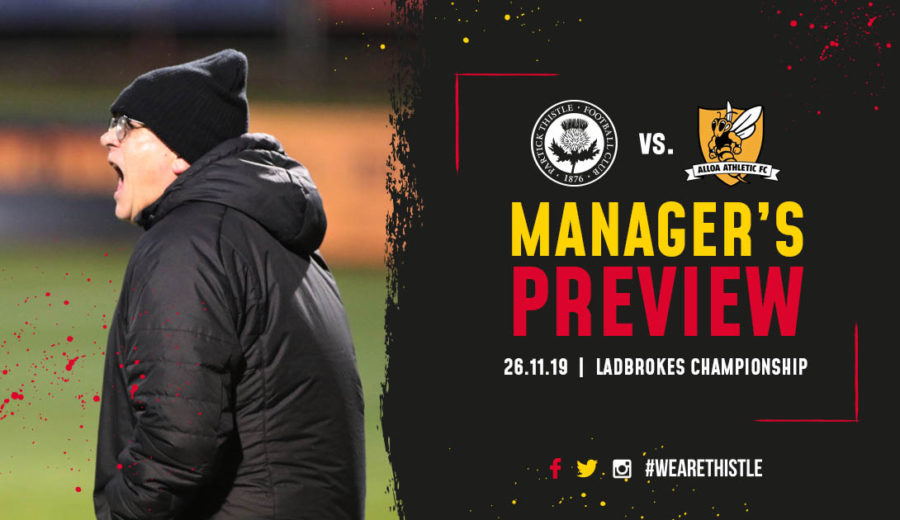 Thistle return to action tomorrow night as Alloa Athletic visit the Energy Check Stadium at Firhill on Ladbrokes Championship business. Jags gaffer Ian McCall caught up with ptfc.co.uk to look ahead to the clash with the Wasps.

“Tomorrow is a big game but they’ve all been big over the last couple of months. That is the way this league is. Once we get past tomorrow, Saturday will be just as big and then it moves onto the following Saturday being big as well. All the teams are closely matched and it could be as tight a league as it was last season.

“We’ve set a target of where we want to be when January comes and it is up to us to go and get results to do that. We’ve had ten games since I came back and we’ve won six of them. I’m still not happy with how we’ve played, the players know they can do a lot better but if you win 60% of your games I’d take that for the rest of my managerial career.”

The gaffer is looking for more points to add to the tally and has been pleased with the recent form.

“We’re putting in the hard work and effort and it’s not manifesting in brilliant performances but we’re getting wins on the board. We’ve won three of the last four which is a good run to have so we’ll be looking to keep that going. I hope we get a reaction tomorrow night and we’ll need an improved performance if we are going to get the win.

“We got through in the Scottish Cup and drew Celtic which is great. It’s a boost for the club financially and should be a great day for everyone involved and it is one to look forward to when it comes round in January.”

The focus has been on recovery with just 72 hours between matches and Ian admits the preparation is individual for each player.

“The preparation has been specific to each player. Everyone was in on Sunday morning for training and the players who didn’t take part on Saturday did a bit more than the players who did. We want to have everyone firing and ready to play on Tuesday night so we have to tailor it to what each player needs.

Finally the manager updated us with team news.

“Joe Cardle returns from suspension which is a big boost because he is a very creative player. Stuart Bannigan serves the last match of his suspension so he’ll miss out again. We’ve got the usual knocks and niggles that you get when you play so quickly but they should all be fine.

“The big news is about Shea Gordon. He took a bad one when he was on international duty and when he first came back we thought it might have been a season ender for him. We’ve had him looked at, and while I don’t want to put an exact time on it, I think we are looking at him missing out for about three months. It’s a shame for Shea because he has shown his quality recently and went into the international break on a real high with those two goals against Morton.”

SO CLOSE! A Reece Cole free kick from 25 yards is tipped onto the bar by MacDonald.

Cole's corner is nodded on by Cardle but McGinty just can't connect at the back post.

A Cardle effort can only be palmed by MacDonald but the defender gets there before Zanatta can get to the rebound.

Thistle are pushing straight from the start. Cardle has a shock blocked and Miller can't quite get the rebound.

A Reece Cole corner falls for Dario ZANATTA at the back post who has the simple task of knocking it over the line.

Reece Cole has an effort from 25 yards out but it's the wrong side of the post.

A shot from the right is deflected over Sneddon and into the net by Trouten.

Slater does well to win the ball in midfield which sets free Miller one on one with he keeper but his effort strikes the bar and goes over.

Good run by Cardle finds Slater in space, he advances and has space but his shot is straight in to the hands of MacDonald. 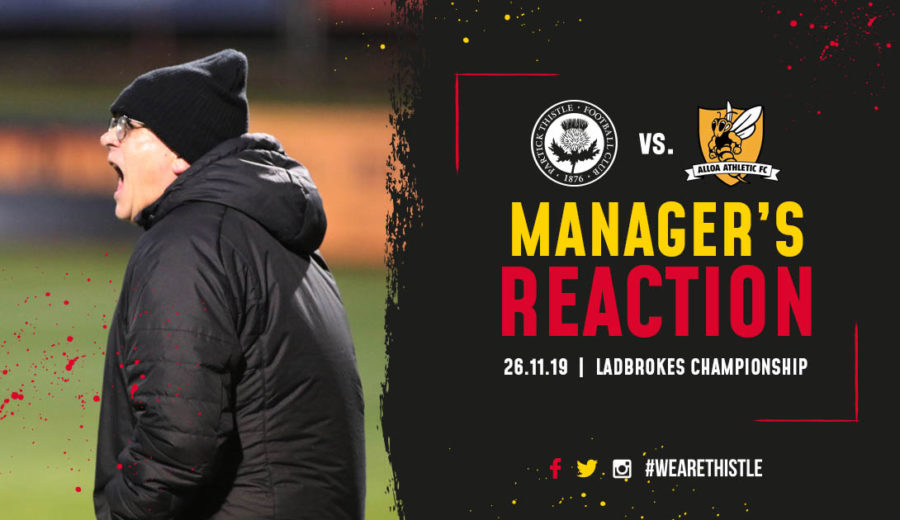 Thistle were made to settle for just a point on a wet Tuesday night at the Energy Check Stadium at Firhill as the Jags couldn’t find a way past a resolute Alloa Athletic defence during a dominant second half. Ian McCall spoke to ptfc.co.uk shortly after the game.

“I’m absolutely gutted we didn’t get the three points but I am hugely enthused by the way the team played. It was our best performance at Firhill since I’ve been here. I think we should have been two goals up before they scored and that allowed them to really sit deep. We hit the bar a couple of times and Jamie MacDonald made an outstanding save from Reece Cole’s free kick. It’s two points dropped but hugely encouraging how they played”

The manager was pleased with the way his side reacted to the set back of going a goal down early on and wants his side to display those characteristics in matches going forward.

“I was hugely enthused by how the side played tonight and I think the crowd was as well. I think we saw a reaction to the poor performance from Saturday although I’d have taken a poor performance and winning 1-0 rather than playing quite well and dropping two points.

“The side did really well to bounce back. In the past we might not have had the confidence to keep plugging away and trying to create opportunities. In the second half it was one way traffic as we had them camped in. We had a couple of chances, balls zipped across goal and it just didn’t go in the net for us.”

Thistle head to East End Park on the back of a four game unbeaten run and the gaffer is looking for that to continue.

“It’s about picking up points. We are now unbeaten in four matches so we’ll go to East End Park with a bit of confidence and look to go and win the game. We’re on an ok run of form, if we can make it another win on Saturday then it will be a good run of form for us heading into December.”

Finally Ian provided an update on the condition of Scott Fox who picked up an injury in the warm up.

“He has done his Achilles and that is an area of the body you take absolutely no risks with. We don’t know how long or how serious it is yet but hopefully he isn’t on the sideline. Jamie came in and didn’t have an awful lot to do during the game. He’s been training really well and pushing Scott really hard and he did himself no harm whatsoever with a very assured performance this evening.”

A more in depth video interview with Ian McCall is available to Jagzone subscribers now as well as reaction from Jamie Sneddon – log in to view.