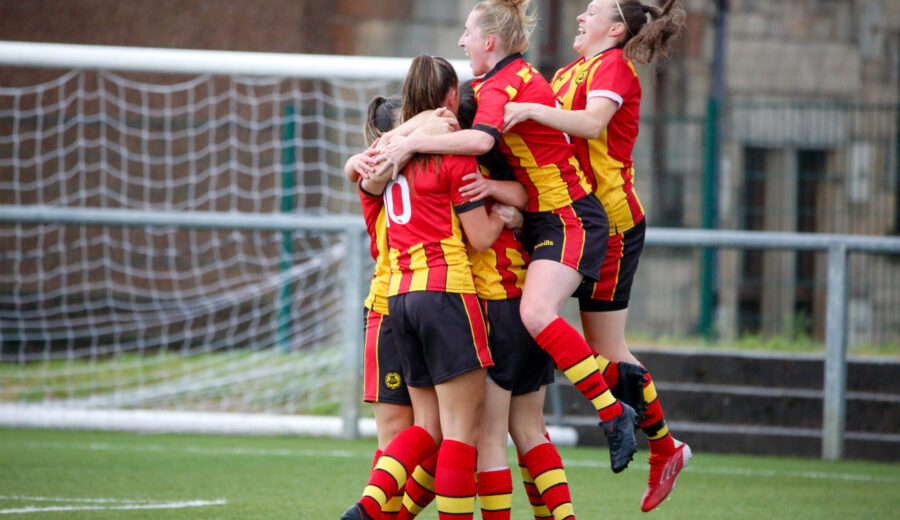 Thistle could scarcely have been handed a tougher opening fixture to the 2021-2022 season than a SWPL Cup fixture against Celtic, and although the match eventually ended in defeat for The Jags they can take great heart from a brave performance that stretched Celtic to the full.

The Thistle cause wasn’t helped any by the non-availability of several players, not least last season’s Player of the Year Clare Docherty and Sophie Gallacher both of whom are currently injured, but Brian Graham was able to hand three players their competitive Thistle debuts in his starting eleven.

Lauren Grant started in goal and she was joined in a new look defensive line-up by Rosie Slater and Ellie Vernal the two teenagers joining Thistle on season long loan deals from Rangers. On the evidence of this showing, they should prove to be major assets in the season ahead.

Against full-time opposition with talent and strength in depth a tough afternoon for Thistle was anticipated but the start they made to proceedings was the stuff that dreams were made of as they took an 7th minute lead.

The goal was down to the perseverance of Tiegan McCann deployed in the lone striker role. She closed down Celtic keeper Johnstone and when she charged down her clearance she was rewarded for that perseverance when the ball flew into the back of the net.

A fierce Celtic response was anticipated and although they did enjoy the lion’s share of possession and had, on occasion, Thistle under pressure The Jags were providing resolute opposition and were contributing just as much to proceedings as their more illustrious opponents were.

On the occasions that Celtic did stretch the Thistle defence they found themselves consistently repelled by a determined and incredibly hard-working Thistle side.
Wellings had a chance for the visitors in front of the Thistle goal on the midway point of the half but the ball stuck under her feet allowing Grant to collect before Freya Macdonald made a clearance close to the Thistle left hand post.

Grant made a double save after 28 minutes as Celtic stepped up the pressure looking for an equaliser, but it wasn’t all one-way traffic either.

There were strong Thistle appeals for a handball and a penalty turned down after a McCann cross struck a defender and following a surging run through the midfield a Gallon shot from distance cleared the Celtic crossbar.

When Celtic did grab an equaliser with just 4 minutes of the half remaining it was ironic that they did so on the counterattack after McCann and McBrearty had looked to get in behind the Celtic defence. A quick, incisive thrust up field gave Wellings a chance to beat the advancing Grant which she duly did to level the scores.

Celtic were certainly finishing the half strongly and they were close to snatching what would have been an ill-deserved lead at the break when a Clark header from a corner slipped just the wrong side of the post.

The second half started with Thistle making a change in goal with Lauren McGregor handed her chance to impress and becoming the fourth Thistle debutant in the process while Celtic underlined their strength in depth, whilst also acknowledging the problems that Thistle had caused them in the first half, by making a trio of changes.
A Jacynta shot was deflected wide for a corner, but Thistle were continuing to make life extremely difficult for Celtic when the SWPL1 side took the lead just before the hour mark.

It was Donaldson, one of the three half-time Celtic substitutes, that created the goal was an excellent cross from the Celtic right that was headed home by Wellings for her second goal of the afternoon.

If some expected a Thistle capitulation at this point, then they were disappointed.
Both Fleming and Gallon forced Johnstone into saves, albeit comfortable ones as a Thistle side showing tremendous work ethic and desire refused to give up.

They did, however, start to tire and that did allow Celtic to create several chances as the game moved into its final stages.

McGregor twice made important saves, first from Atkinson and then Hayes and the post came to Thistle’s rescue with just two minutes remaining.

Celtic did though grab a third and decisive goal right on the 90 minute mark which was harsh on Thistle. McGovern was able to peel away as a corner came over from the right and her crisp finish found the net.

That was the last of action but although defeated Thistle can take much from this performance.