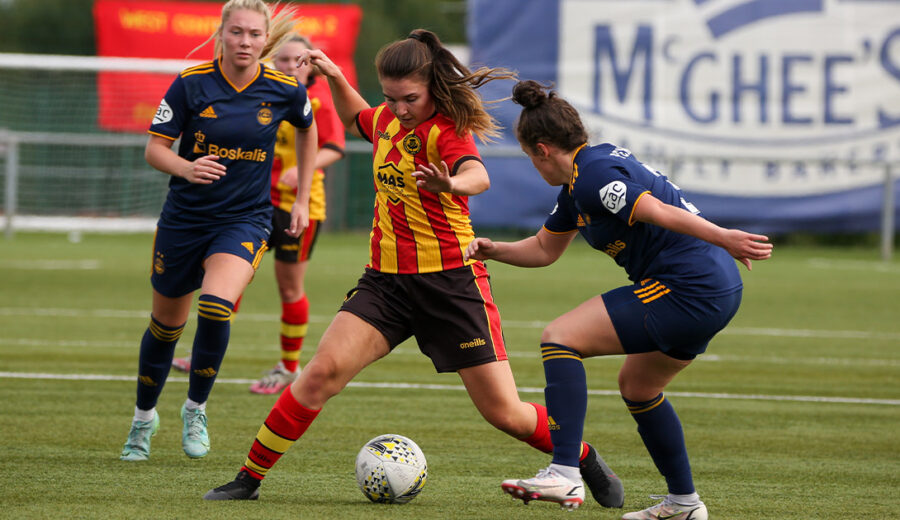 Thistle were sadly unable to mark the historic occasion of their very first match in the top tier of the women’s game in Scotland with a win. When the dust had settled on what was often a bruising 90 minutes, it showed that Thistle had come up a little short against last season’s SWPL2 Champions, Aberdeen, and had gone down to a 2-0 defeat.

Brian Graham’s team selection handed a Jags debut to new loan signing from Celtic London Pollard as well as a trialist in the heart of the Thistle midfield and there was a real sense of anticipation ahead of kick-off.

Once the game started though it was the visitors from Aberdeen that were first to assert themselves on proceedings, although Lauren McGregor in the Thistle goal was never called upon to make a direct save.

Nor was her counterpart, Gail Gilmour, at the other end although a Freya MacDonald shot following a lovely crossfield pass from Pollard was touched behind for a Thistle corner.

As Thistle began to grow in confidence and settle into the game Cheryl Rigden was just unable to get on the end of a Pollard cross and a Rosie Slater effort from distance cleared the Aberdeen crossbar.

It was Aberdeen though that had the better of the opening 45 minutes.

McGregor was able to make an important save with her feet to deny Shore and Cheryl McCulloch made an important interception just as Ogilvie was about to shot.

The fact that Aberdeen were unable to turn their territorial dominance into clear cut chances in the first half was testimony to the discipline that Thistle defended with.

They were, however, forced into making a change at the break with captain Colette Fleming picking up a knock just before half-time with her place in the team going to the second trialist listed in the Thistle squad for the game.

The second half was a more even affair than the first had been but clear-cut openings at either end remained at a premium.

A misdirected clearance from Gilmour did end up at the feet of McBrearty though but McBrearty was unable to hit target from 30 yards out.

The deadlock was broken after 52 minutes with the circumstances leading to the goal highly unfortunate from a Thistle perspective.

After play had been stopped for Demi Falconer to receive treatment the game restarted with an uncontested drop-ball at the edge of the Thistle box with Falconer still off the field. From that drop-ball the ball was worked to Eva Thomson who found the net with a composed finish.

Thistle’s response to the loss of that goal was excellent as they pressed hard in search of an equaliser.

Aberdeen’s defensive efforts though restricted the number of opportunities that came the Jags way.

A McBrearty shot from distance, dipped just a shade too late, a McCulloch header from a McBrearty free kick cleared the bar and a Summer Christie shot from outside the box was too direct to truly trouble Gilmour in the Aberdeen goal.

The destination of the points was not settled until the game was in injury time. McGregor had already saved at the feet of Mya Christie as she raced clear of the Thistle defence on a counterattack but with the game two minutes past the 90 minute mark she made no mistake when a second opportunity came her way. Any Thistle appeals for offside falling on deaf ears.