Entry for this fixture is via pay at the gate. Cash and card are accepted.

Season tickets are valid for this match. If you have already purchased your 22/23 season ticket you should have recieved your card.

Season tickets are still on sale priced at the great price of £60 or £40 if you already have a men’s season ticket.

Gates open at 12:15pm for the fixture and entry is through the gates at the car park side of the ground.

There is parking available for free at Petershill Park. Spectators should use the lower two levels of parking at the stadium.

The pie stall at Petershill Park will be open before kick off selling a variaty of food and drink. Payment is by cash only.

PTWFC will be providing a FREE live steam on our YouTube channel.

Coverage will begin around 10 minutes before kick off.

After the match we’ll have all the reaction from the Thistle camp on our Twitter and Facebook pages with Full match highlights and interviews on our YouTube Channel.

We’ll also have a full match photo gallery available after the game. 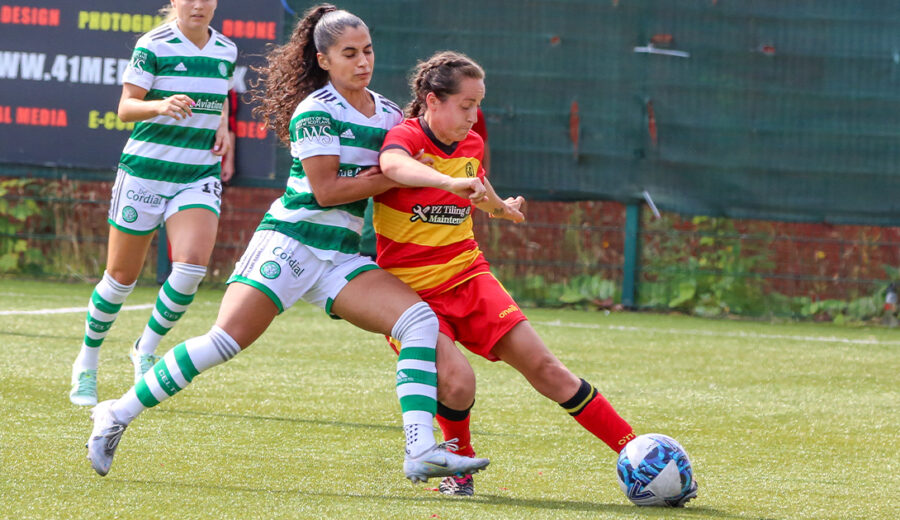 After starting the season with the disappointment of defeat away to Hearts, Thistle began their home league campaign with the daunting challenge of facing Celtic. There was no real surprise that Celtic began their season with victory over Hibs but the margin of that win, Celtic winning 9-0, did raise more than a few eyebrows and there was some apprehension going into this fixture.

Brian Graham’s team selection for the opening game had been hampered by the availability, or lack, of some key players but he was able to welcome back Rosie Slater and Rachel Donaldson back into the starting elven as he rejigged his side for the challenge ahead. Linzi Taylor dropped into a central defensive position alongside captain Demi Falconer. Rosie Slater came back in at left back which allowed Beth McKay to be pushed into a five strong Thistle midfield with Jordan McLintock deployed to plough the lone furrow up front.

Indeed, it was Thistle that took the game to Celtic in the very early exchanges with McLintock hitting target with a shot from outside the Celtic box albeit one that the keeper was able to save with comfort.

What Thistle didn’t want to do was concede early and they came close to doing just that. With just 6 minutes on the clock Clare Docherty’s headed back pass went beyond Khym Ramsay in the Thistle goal, but thankfully Linzi Taylor was on hand to clear off the line.

As much as Celtic were dominating possession Thistle did their best to take the game to Celtic and their industrious midfield display wasn’t without reward as they won a series of free kicks deep inside the Celtic half without be able to put the visiting defence under any undue pressure and it was Celtic that continued to look the more likely side to open the scoring.

When the Celtic opener did arrive after 24 minutes though there was more than a touch of good or bad, depending on your perspective, fortune surrounding it. Ramsay made a good block at her right-hand post, but the ball rebounded off Taylor for an own goal that the Thistle defender, who was excellent throughout the game and was the sponsor’s Player of the Match, could do little about.

If some thought that Thistle would capitulate having fallen behind, then they were to be disappointed. A dangerous looking corner from Amy Bulloch was headed clear. The Celtic keeper did well to collect the ball ahead of McLintock, and almost right on half-time a Clare Docherty cross from the right-hand side was cleared.

The second goal in this game was always likely to be vital and it came the way of the visitors 9 minutes into the second half. Cara Henderson was penalised for hand ball and Craig sent Ramsay the wrong way from the resultant penalty.

With Celtic two goals to the good the destination of the points never looked in doubt as much as Thistle tried to find a route back into the game.

It was Khym Ramsay that remained the busier of the two goalkeepers. She made a fine double save to keep the score a 2-0 as the game entered its final quarter and just on full-time she was at full stretch to keep Chance’s low effort from finding the bottom corner of her net.

Although nobody could argue that Celtic didn’t deserve to win this game there was much for Thistle to take from this game.