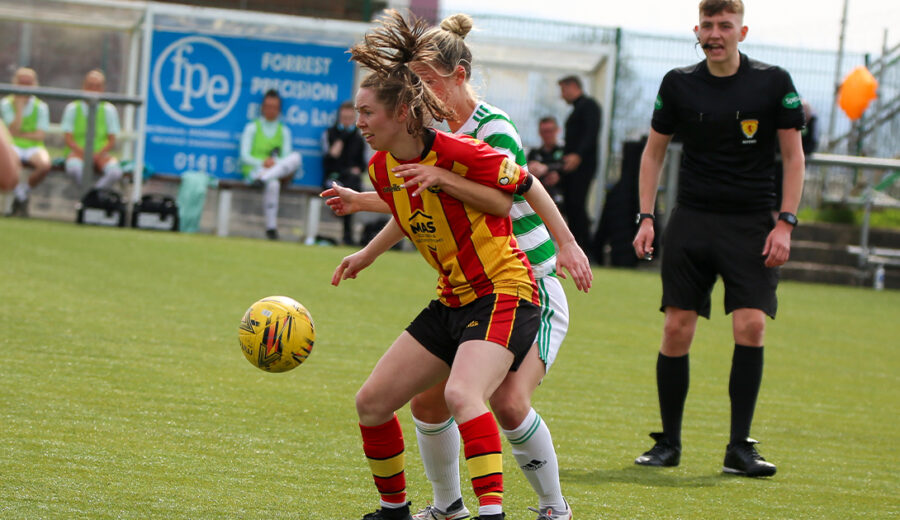 After the excitement of the victory over Hibs that took Thistle into the last hour of the Biffa Scottish Women’s Cup, it was back to league action at Petershill Park and the not inconsiderable challenge of facing Celtic.

Ultimately it would finish in a third league defeat at the hands of the third placed SWPL1 side, but this was Thistle comfortably at their most competitive against Celtic in the league this season and they stretched their more illustrious opponents for the duration of the full 90 minutes.

As often is the case in these types of fixtures it was the higher placed side that enjoyed most of the game’s possession and Celtic threatened early with a Toland free kick that cleared McGregor’s crossbar. They were close again a short time later, but McGregor was well placed to save Shen’s effort.

The Thistle keeper was altogether more stretched when she produced a fantastic save low to her right to push away a Atkinson free kick. There was a chance too for Celtic from the corner that followed, but Shorts lifted her effort over the bar.

Far all those Celtic chances it hadn’t been all way one traffic. A deflected McBrearty effort had produced the game’s first corner and a long range shot from Donaldson forced a save, albeit a routine one, from Johnstone in the Celtic goal.

The better chances though were Celtic’s. McGregor made another impressive save, this time with her feet, to deny Jacynta as Celtic threatened on a swift counterattack.

The game’s opening goal arrived after 33 minutes just when thoughts were turning towards Thistle taking equality into the dressing room at the interval. Depending on whether you were watching the game through Celtic or Thistle eyes there was either a touch of good or bad fortune surrounding the goal that broke the deadlock. At any rate Wellings tucked the ball past McGregor when the ball broke to her inside the box.

Thistle tried to find an equaliser before the half-time whistle and Donaldson dragged a shot wide of target, but it was that Wellings’ goal that separated the sides at the interval.

Thistle’s best spell in the game came in the period immediately upon the restart. A curling effort from McBrearty from 20 yards out dipped just a shade too late and the Celtic defence were hard pressed to scramble clear a Donaldson cross as Thistle well and truly had the scent of an equaliser in their nostrils.

The game’s next, and decisive, goal though came at the other end when Wellings was left with a simple fashion after 65 minutes.

It nearly became 3-0 almost immediately after with McCulloch making a great clearance from near the Thistle goal line but there was no capitulation from Thistle who never stopped looking for a route back into the match.

They thought that they had found that potential route after 70 minutes, but a fantastic McBrearty free kick was just a whisker too high.

There would be no further scoring in a match that once again provided evidence of the growth of this side that is developing into a highly capable one.