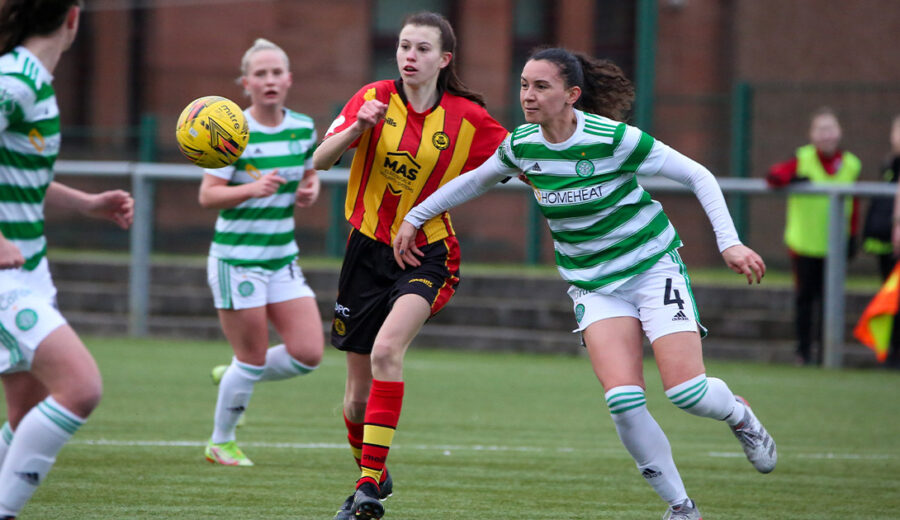 It’s not the results against the ‘big three’ of the SWPL1 that will define our season but that was still a disappointing experience, especially in an opening 45 minutes in which Celtic established an unassailable lead just past the half hour mark.

Ironically in view of what was to follow Thistle made a bright start to the game and spent more of the opening 15 minutes inside the opposition half than they have tended to do in these fixtures. A clipped free kick from McBrearty deep into the Celtic box offered the first hint of a Thistle chance but the flag went up for offside.

The opening Celtic goal though arrived after 16 minutes.

Chance showed quick feet in creating space for herself inside the Thistle box and her shot flew past McGregor and into the net via the underside of the crossbar.

McGregor did well to push away Jacynta’s shot but Gros was on hand the tuck the loose ball.

With 31 minutes on the clock any hopes of a Thistle comeback were extinguished when Celtic added a third goal.

Chance cross for Craig and her header hit the underside of the bar with the referee following a quick glance to his assistant, signalling that the ball had crossed the line.

The Thistle defence was carved upon by a slick Celtic passing move with Jacynta setting up Gros for an easy finish.

With the sanctuary of the dressing room still 5 minutes away Celtic added a fifth goal.

This was a self-inflicted wound with Celtic collecting a misdirected Thistle free kick with Craig punishing Thistle to the full when she beat McGregor.

Thistle made a couple of personnel changes at the break and changed their shape but Celtic quickly added to their advantage when Wellings’ shot from distance beat McGregor and went in via the underside of the bar.

It would have been easy for Thistle to completely capitulate at this point and credit is due to the way the buckled down and attempted to take the game to Celtic.

There was a debut for Morgan Anderson who has come through our development pathway from Drumchapel United and against top quality opposition she impressed offering a bright look to the future on an otherwise disappointing afternoon.

Only a brave Vincenti save at Anderson’s feet denied her the chance to mark her debut with a goal.

Thistle’s best chance of a goal in a much improved second half performance came the way of McBrearty when she collected a pass from the Trialist at the edge of the box and spun sharply to create an opening for herself but lifted her powerful shot over the crossbar.

At the other end MacDonald made a great goal line clearance to deny Wellings and with 10 minutes remaining McGregor made a smart save to deny the same player.

It was a little harsh on Thistle when Celtic added a 7th goal right on the 90 minute mark when Atkinson shot across McGregor and into the far corner of the net.