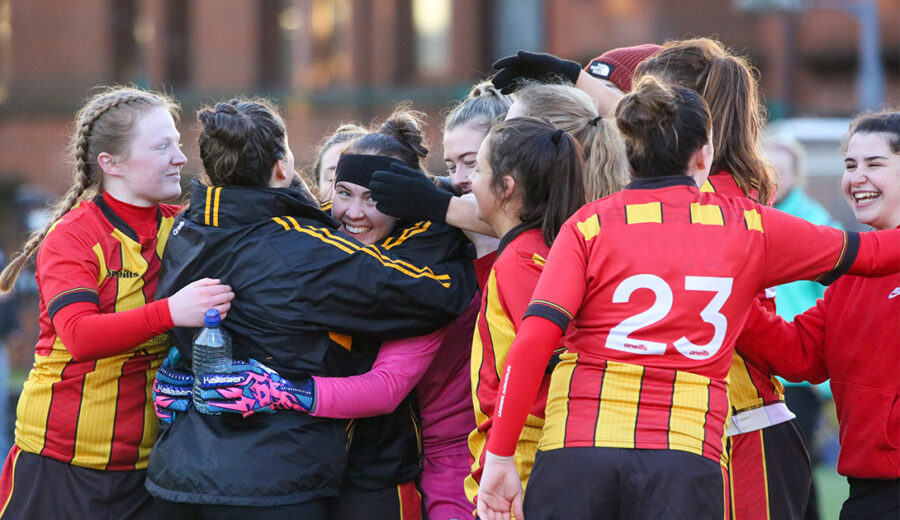 It was an afternoon of high drama, a last gasp injury time equaliser and a penalty shoot-out. When the dust did finally settle on an entertaining game Thistle had squeezed their way through to the fourth round of the Scottish Cup reaching that stage of the competition for the first time in their history.

Both sides would no doubt have preferred to have avoided opposition from their own league at this stage of the competition but with the teams having served up a Petershill Park five goal thriller earlier in the season this was a keenly anticipated fixture all the same.  Those in attendance, Thistle hosting their biggest home attendance of the season, weren’t to be disappointed.

For much of the game it was Motherwell that looked the most likely to progress to the next round. They were certainly the dominant side in the opening 45 minutes and during an impressive opening salvo they took a 12thminute lead.

Good work down the left hand side from Inglis gave her the opportunity to cross for Boyce who was able to nod home from close range.

It took Thistle until just after the half hour mark to fashion an opportunity to level the scores.

McGowan won the ball deep inside her own half and powered forward. With option to both the right and left of her she elected to slip the ball to Docherty to her left. Docherty advanced into the Motherwell but wasn’t quite able to direct her shot wide of Duff in the Motherwell goal who saved well.

.
McGregor produced a smart save low to her right to deny Inglis early in the second half and Pollard couldn’t force the ball home after a slick Motherwell move as the visitors looked to press home their advantage.

Thistle though were level after 56 minutes.

The move started with a deft pass down the left from Murphy for McCulloch. McCulloch free from her normal defensive role pushed forward down the left flank and when Duff wasn’t able to cling on to her low cross Freya MacDonald was able to bundle the ball home.

Having restored parity Thistle nearly fell behind almost right on the restart when it took an excellent save from McGregor to tip McCulloch’s sliced clearance over her crossbar.
Motherwell were back in front though with 14 minutes remaining.

Motherwell won a free kick on the left near the edge of the Thistle penalty box and Crichton found the net direct from the free kick with a powerful effort that left McGregor with little chance.

That goal had the look of a winner about it but this Thistle side have battling qualities aplenty.

McBrearty and Docherty exchanged passes providing Docherty with a shooting chance but Duff was equal to her effort as Thistle pressed for the goal that would take the tie to extra-time.

It would be deep into injury time before that goal would arrive.

Rice’s foul on McCulloch earned her a second yellow card and Thistle a free kick. From McBrearty’s free kick it initially looked as if it was the head of McCulloch that had pulled Thistle level but a re-watch showed that it was Clare Docherty that headed the last gasp equaliser.

With tired legs a plenty opportunities for both sides in extra-time were limited although McBrearty did force Duff into a save and Crichton fizzed a shot over the Thistle crossbar but the tie would be decided by penalties.

The early advantage went to Thistle when Laura McGregor went to her right to save Crichton’s spot kick and that advantage was pressed home when McGowan netted her penalty.

Watson for Motherwell and McBrearty both netted their penalties before Anderson sent her effort over the bar with Fleming making it 3-1 taking Thistle to the brink of the next round.

Boyce kept the shoot-out alive but Demi Falconer had the chance to win the tie and the player more associated with preventing goals rather than scoring them herself made no mistake to send Thistle through to the next round.