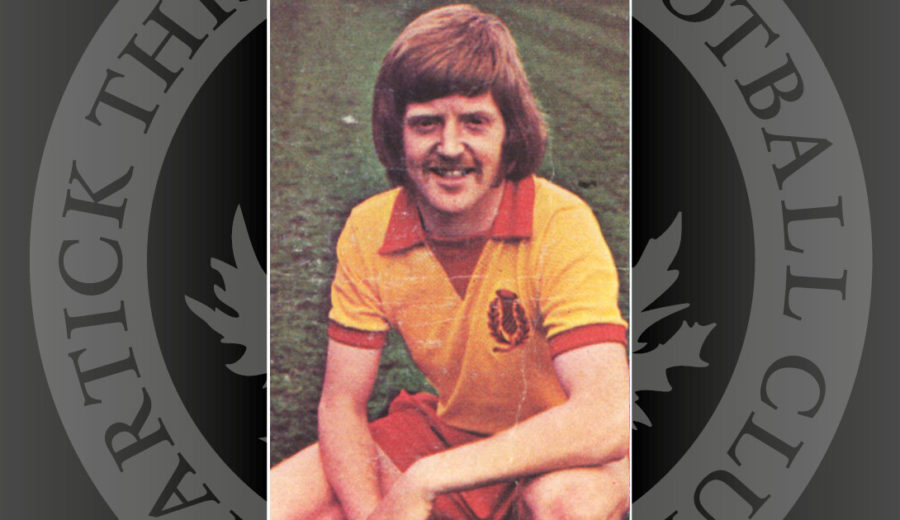 Alex is just one of two Thistle players who have had the honour of lifting a major trophy above their heads, as captain of Partick Thistle. As the experienced head of the 1971 League Cup winning side, his leadership was vital to his younger colleagues and central to the success that they had.

Alex’s career began with Renfrew Juniors where he started to make his name as an outside-left. After impressing with the Junior side he moved to East Fife, spending five years in Methil. In 1968, Bury were tempted to pay £10,000 for his services but he only spent a single season in England.

In the summer of 1970, with Thistle just relegated, experience was needed and Davie McParland worked hard to bring in Hugh Strachan and Alex Rae. Rae had an immediate influence on the team ensuring the side worked hard to defeat Stirling Albion in his first game in the Thistle shirt.

He captained the side as they started their 1971-72 campaign by defeating Rangers 3-2 in the first game back in the First Division, but the League Cup was where the excitement was for Thistle supporters.

Alex opened the scoring with a curling shot after just 10 minutes. Still only 25, he was regarded as the experienced head in the side as Thistle led 4-0 at half time. Seeing out the game in comfort left Alex with the simple task of lifting the trophy at full time; a task he said changed his life forever.