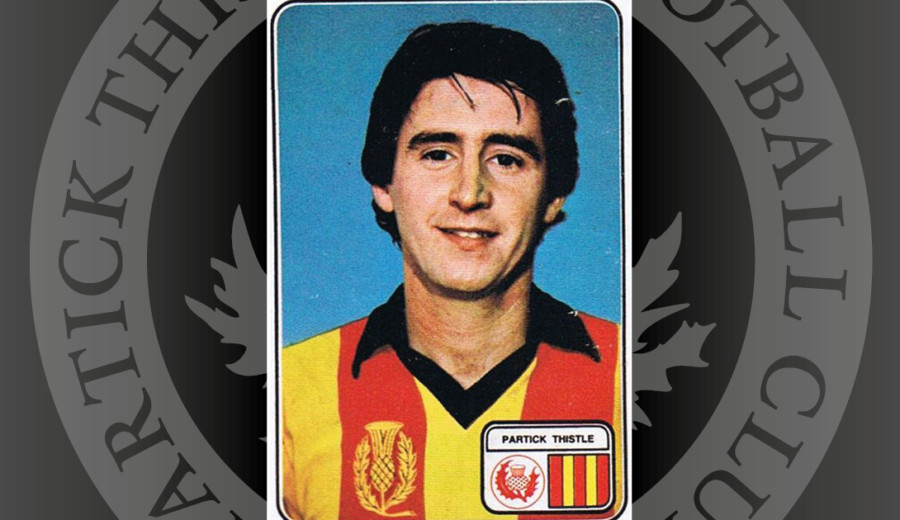 Bobby Houston or, as he affectionately came to be known by Thistle fans ‘Badger’, started his football career playing for his school teams. It was while playing with St Margaret Mary’s Secondary School in Castlemilk that this talented young lad really started to make people sit up and take notice. He stepped up to the Junior ranks when he joined Rutherglen Glencairn and it was from there that he joined Thistle in 1971. His debut for the Thistle Reserves would soon follow.

Season 1973-74 was his first full season as a member of the Thistle first team squad and Houston played a total of 39 games that season as, to quote a Thistle programme of the time, “an inside man, midfield player and latterly as a full back.” The article continued; “Although this is his first season as a regular first team choice Bobby has shown commendable skill in each of the roles he has been asked to play.”

Versatile or not it was a flying winger that Houston the Thistle player is first thought of. Johnny Gibson’s transfer to Ayr United saw Houston move more or less permanently to an attacking role in the Thistle side. A role he filled with no little skill.

It was a little disappointing, therefore, that Bobby’s undoubted skills were never recognised at international level. Twice he was called into the Scotland Under 23 squad but on neither occasion did he get to make an appearance. He was, however, capped by the Scottish League in a fixture against the Irish League in 1978.

The biggest disappointment , though, in Houston’s Thistle career was unquestionably defeat in the 1979 Scottish Cup Semi-Final. Thistle lost a Hampden replay 1-0 to Rangers but it was a replay that Thistle fans swear to this day should not have been necessary. With the score tied at 0-0 and with time rapidly running out Bobby Houston looked to have headed the goal that would have taken Thistle to the final for the first time since 1930. A raised flag though ended Thistle celebrations. In an interview in the Thistle programme in 1989 Houston took up the story.

“We all thought that we could beat them (Rangers), and we did ‘beat’ them. The goal that I scored was never offside. We had practised the move leading to the goal at training and I can remember that when I started my run I was behind Ally Dawson. The ball came to me at head height and I just had to nod it into the net. I started running about delirious only to see the linesman chalk it off for offside. I met Stan Anderson, who was the Rangers coach at the time, a couple of weeks after the game and he told me that when the ball went in the Rangers bench thought the game was over  as there were only ten minutes left.”

Houston’s Thistle career came to an end in the first few months of the 1979-80 season, his final appearance for Thistle coming in a fixture against Dundee United on September 22nd.

By the time the following weekend’s fixtures came round Houston had joined Kilmarnock in a deal that saw Ian Jardine move to Firhill.

Now at Rugby Park, Houston came up against his old side for the first time just a couple of months after his departure from Firhill. Thistle won the fixture 1-0, as they often seemed to do at Rugby Park in those days, with Houston’s involvement in the match fleeting to say the least. Sent on as a second half substitute the story goes that Houston received a less than friendly welcome from his old teammates. “Still aff yir heid then Badger?” is one of the comments alleged to have made in Houston’s direction. At any rate the red mist came down, a yellow card was swiftly followed by a red one and off he went. Houston had been on the park for only a handful of minutes.

Despite that indiscretion Houston would serve Kilmarnock well for a number of years. After leaving Rugby Park, Houston spent a number of seasons with Morton before retiring at the end of the 1984-85 season.