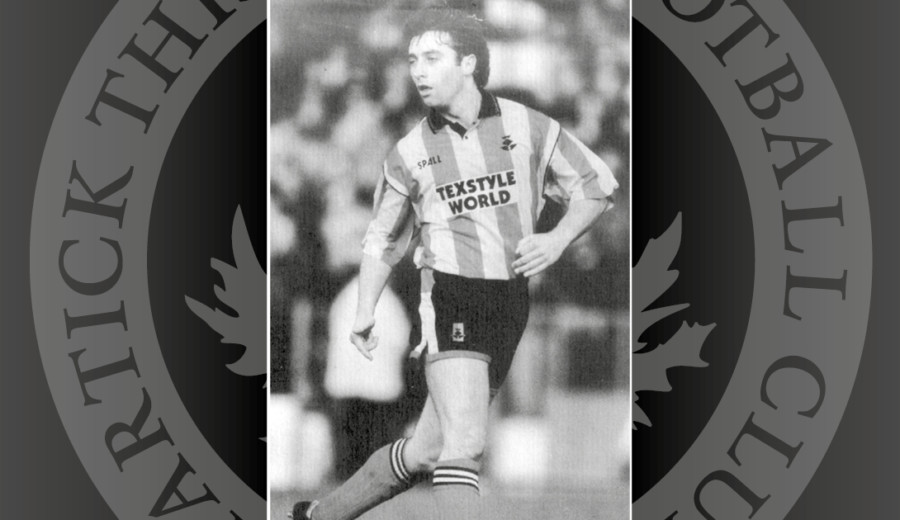 Recruited from Junior outfit Stonehouse Violet, Bobby Law had a turbulent time at Firhill with the Thistle support quite often split between those that loved Bobby and those that were less keen on his skills.

During the close on eleven years that Bobby spent at Firhill he played under no fewer than seven different managers (including those in temporary charge). It was the first of those, Benny Rooney, who handed Law his first team debut just a few months after arriving at Firhill. On 27th October 1984 he wore the number six jersey as a Thistle side very much struggling at the time went down 2-1 at home to Brechin City.

It certainly wasn’t the most auspicious of starts to his career at Firhill. Indeed Law would spend the rest of that season in the Thistle reserve side and would make just one other first team appearance in a low key Glasgow Cup tie at home to Clyde.

The following season though Law began to establish himself as a regular in Thistle’s first team squad. He would play in each of Thistle’s first six games of the season and at Dumbarton he scored his first ever Thistle goal. Far from prolific scorer, he would net just eight goals in Thistle colours from over 300 appearances, he did have an eye for the spectacular and his first Thistle goal certainly came under that heading – his long distance volley the Thistle winner in a 2-1 win.

However, after a bitterly disappointing 0-5 reverse at Rugby Park, six months would pass before Bobby would again feature in the Thistle first team.

As the season drew to a close Thistle, who were involved in a real relegation dogfight, replaced manager Benny Rooney with Bertie Auld and he helped steer Thistle to safety with Bobby more than playing his part. Now firmly back in the first team plans Bobby scored in successive matches against Ayr United and Clyde.

The 1980s were an almost constant struggle for Partick Thistle with a whole host of players coming through the doors at Firhill. Many of them soon left having made the bare minimum of contributions. While Bobby Law may have had his detractors amongst the often hard to please Thistle support he and Kenny Watson were often the only constants during a bleak period for the Club.

With that in mind, few were entitled to as vigorously celebrate promotion at the end of the 1991-92 season than Bobby Law. Thistle’s promotion achieved on the last day of the season following a 0-0 draw with Forfar Athletic was by the narrowest of narrow margins. Few cared though when the final whistle sounded and thousands of Thistle fans spilled onto the Firhill surface. While most of the Thistle squad headed for the dressing room legend has it that Bobby ran in the opposite direction straight into the arms of the jubilant Thistle support.

Once promoted to the Premier Division Thistle were expected to make a rapid return to whence they came and many predicted that Law wouldn’t be able to make the step up either.

Both predictions were to be proved wrong as Thistle spent four seasons in the top flight with Bobby in the team more often than he was out of it. He also played his part in notable wins against both halves of the Old Firm.

At times it appeared that his relationship with John Lambie was a little strained. Bobby for all his commitment and application wasn’t without his impetuous moments and he often incurred the wrath of referees and, as a consequence, his manager. Who that saw it will forget Lambie’s reaction to a Law red card in a Scottish Cup tie at Brockville?

As already mentioned Bobby was hardly noted for his goalscoring exploits but he did net one unforgettable goal in a fixture against Hamilton Accies.

Or did he? On 11 November 1989 Hamilton managed by a not long departed from Firhill, John Lambie, came to Firhill and soon found themselves trailing 1-0 when a Law thunderbolt struck the post before hitting Accies’ keeper Andy Murdoch on the back of the head before entering the net. Bobby’s delight at scoring was clear for all to see with the TV cameras also present to record the moment for prosperity. Bobby was also on target during Thistle’s famous 11-1 win against Albion Rovers.

Bobby’s final Thistle appearance was on Boxing Day 1994 when he came on as a substitute towards the end of a 3-0 defeat at Tynecastle. After leaving Firhill, Bobby played with St Mirren, Ayr United and Stenhousemuir before going back to the Juniors with Kilsyth Rangers.