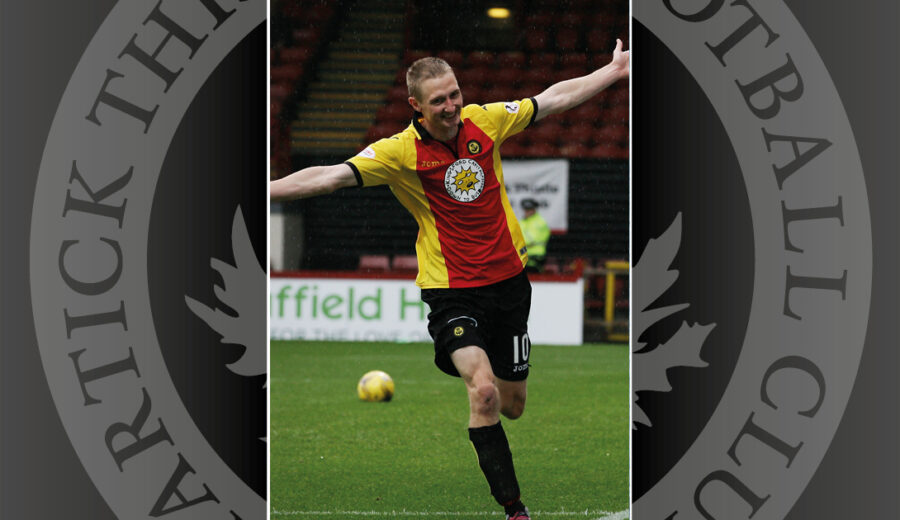 Chris needs little introduction to the Firhill faithful having featured almost 300 times for the Club in recent years.

Joining from Kilbirnie Ladeside in the summer of 2009, Chris quickly established himself as a firm favourite with the Jags support as his skill and trickery contributed to a playing style that was a joy to watch throughout his time at Firhill.

Season 2012/13 was a particular highlight with Erskine establishing himself as the best player in the division in the eyes of the Red and Yellow Army. His 16 goals that season included a number of memorable Firhill strikes but his solo effort at The Falkirk Stadium, sealing the title for Alan Archibald’s side, will always be remembered clearly by everyone in attendance.

Erskine’s form caught the attention of other clubs and he joined Dundee United in the summer of 2013, but he was soon back on loan at Thistle to help the side stay in the division at the first time of asking. A strong season with the Arabs followed in 2014/15 before injury prevented his campaign getting off to a strong start the following year.

In January 2016, he signed a pre-contract agreement to return to Maryhill and Chris immediately picked up where he left off, scoring the Club’s opening goal in the 2016/17 Ladbrokes Premiership, a strike which won the Club’s goal of the season award. It was to be another special season for the Club with Erskine playing an instrumental role as Thistle secured a top six finish – the highest placing by the Club since the early 1980s.

The creative midfielder reached the landmark of 50 goals as a Jag when he scored early in the 2017/18 campaign, continuing to be an important player in red and yellow.

After going through the heartbreak of relegation in the summer of 2018, Chris showed his immense loyalty and love of Partick Thistle by staying with the Club as we looked to bounce back to the Premiership at the first time of asking. In January 2019, Chris left the Club to join Livingston.

With Thistle competing in League One last campaign, Ian McCall tempted Chris to return to Maryhill for what was hoped to be a fairytale finish to his Jags career. Devastatingly, a hamstring injury sustained in a match against Forfar Athletic ended Erskine’s season early to deny the talismanic player the fitting finale to his Jags career that was deserved.

Chris finished his Thistle career with 56 goals, most of which were spectacular, in almost 300 appearances where he gave absolutely everything for the Thistle cause.