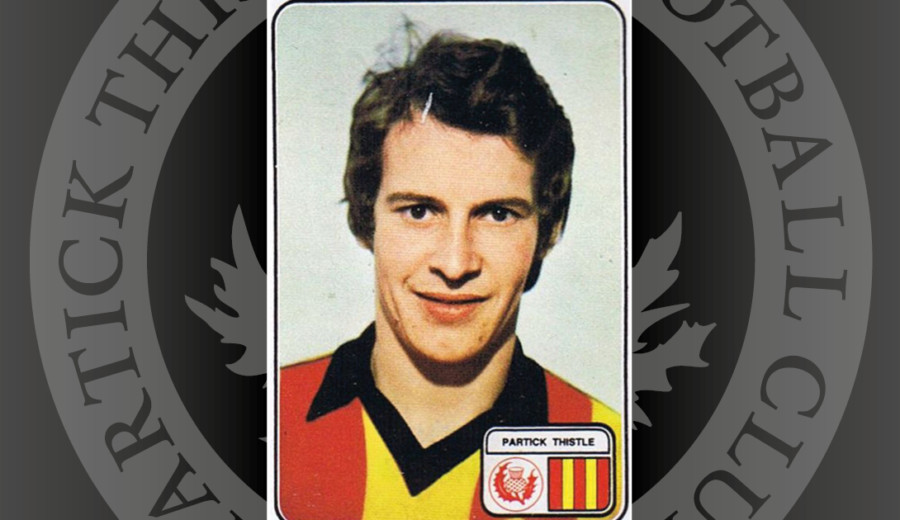 Few players, given the length of time at Firhill, can boost as impressive a goals to games ratio as Dougie Somner can.

Somner stepped up to the ranks of Senior football when he joined Falkirk from East Kilbride Thistle in 1971, and he made his debut against Hibs on the afternoon that Thistle were busy defeating Celtic in the League Cup Final. Somner made the move from Falkirk to Ayr United in time for the start of the 1974-75 season, but his time at Somerset park was a fairly brief one. After just a few months down at the seaside, Somner was on the move again. League Cup winner Johnny Gibson moved to Ayr United with Somner and team mate Dougie Mitchell made the opposite journey to Firhill.

The name of Dougie Somner first appeared on a Thistle team sheet on 23rd November 1974 when the team travelled to face Airdrieonians. Somner didn’t manager a goal in either of his first two appearances, but he soon got off the mark during the course of a 3-1 win over St Johnstone. He followed that up with a double in the next game, his first at Firhill, in a 2-2 draw with Clyde. In his first season Somner was a little upstaged in terms of goalscoring by Joe Craig, but he did still end the season with eight goals to his name from 22 appearance. Included in that total of eight goals was his first Thistle hat-trick, scored as they beat Morton 3-1.

Hat-tricks were very much a feature of Somner’s first full season as a Partick Thistle player, an en route to the First Division championship, he netted hat-tricks against both East Fife and Montrose. He went one better in a Spring Cup tie with Forfar Athletic scoring all four of Thistle’s goals in a 4-2 Firhill win at Firhill.

To put the feat of scoring four goals in the one match into some kind of perspective, Thistle would have to wait the best part of a further eleven years before another player would score that number of goals in the one game – Billy Dodds netted against East Fife.

Together with Joe Craig, Somner would form a pretty potent strike force. In all competitions that season the two players produced a combined total of 49 goals with Somner topping the scoring charts with 27.

As Thistle made the step up to the Premier Division, Somner would never again rise above the twenty goal mark for Thistle, but he finished each of the next three seasons as leading scorer. In his final season at Firhill he had to share that honour with Jim Melrose.

Joe Craig was his first strike partner at Firhill but after Craig left to join Celtic he teamed up with Jim Melrose. That partnership proved to be every bit as good if not better than the one he had with Craig. In three seasons that they spent together they scored between them a total of 88 goals.

The side, the only part-time club in the Premier League, was arguably the most successful side, the League Cup triumph of 1971 notwithstanding, for some time. There was though no tangible reward for their efforts. They did, however, reach the Scottish Cup semi-Final in successive seasons. In 1978 Thistle went down 4-2 to Aberdeen at Hampden Park. Twelve months later, Thistle and Somner came as close as possible to reaching the final. Once again Thistle reached the last four where this time they were paired with Rangers. Somner missed the Hampden semi that finished 0-0 but returned for the replay. It was a replay that Thistle fans to this day swear should not have been necessary, Bobby Houston having a late goal disallowed in highly controversial circumstances  in the first game.

While Somner didn’t get to contest a Scottish Cup Final for Thistle, his talents were recognised by more than just the Firhill faithful. Twice in 1978 he represented the Scottish League, first against the Italian League, scoring in a 1-1 draw, and then later versus the Irish League. In 1980 he was again capped for the Scottish League against their Irish counterparts and was once more on the score sheet in a 4-2 win. By this time he was, however, a St Mirren player.

After 100 goals as a Thistle player there was naturally bitter disappointment when Somner elected to join St Mirren.

The goals didn’t dry up down Paisley way either. In his first season at Love Street he topped the thirty goal mark for the only time in his career, hitting 32 as a very talented side finished third in the Premier Division. His tally the next season was reduced to 16 but he still finished the season as  St Mirren’s leading goal scorer.

Somner spent a further two seasons with the club before joining Hamilton Accies for just one. As he had done so often before in his career he finished as top scorer at the club scoring ten goals, including a hat-trick against Thistle.

Before he brought the curtain down on his career Somner spent two seasons with Montrose. In season 1984-85 he scored twelve goals and he was, inevitably, Montrose’s leading scorer as they won the Second Division title. He played virtually the whole of the following season before retiring at the end of it. Appropriately enough one of his final games for Montrose came against Partick Thistle.