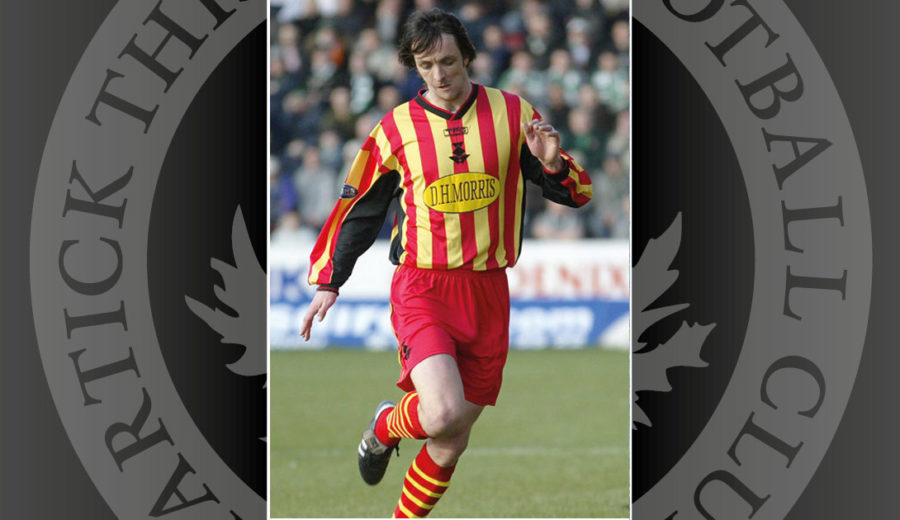 Gerry joined Thistle from Celtic in August 1992 making his debut against Dundee United and scoring his first goal a couple of games later in a fixture away to Hearts.

Gerry finished his first season with Thistle as the Club’s leading scorer with 13 league and cup goals and had four to his name when he left, much to the fans consternation, to join Dundee.

That wasn’t the end of the Partick Thistle story for Gerry Britton though, far from it.

He returned to Firhill in time for the start of the 2001/02 season and bagged 15 league and cup goals, including a memorable strike against Dundee at Dens Park in the Scottish Cup. Thistle won promotion and Gerry finished as leading scorer in the league, just piped in the overall scoring charts by Martin Hardie.

Thistle survived their first season in the SPL with Gerry scoring five times.

The next season, however, was a major struggle and, after Gerry Collins endured a long winless start to his managerial career, Gerry Britton and Derek Whyte were appointed as co-managers.

They were unable to prevent Thistle from being relegated though, and in December 2004 they departed Firhill.

Gerry was back at Firhill in December 2008 as assistant to Ian McCall a position he held until he left in January 2010 to pursue a career in law.

He maintained strong links to the club and for a period Gerry combined his legal career with that of Head of Youth Development for Thistle. However, in October 2013, with the backing of Chris and Colin Weir, the Thistle Weir Youth Academy was born and Gerry was able to take up the position of Academy Director on a full-time basis.