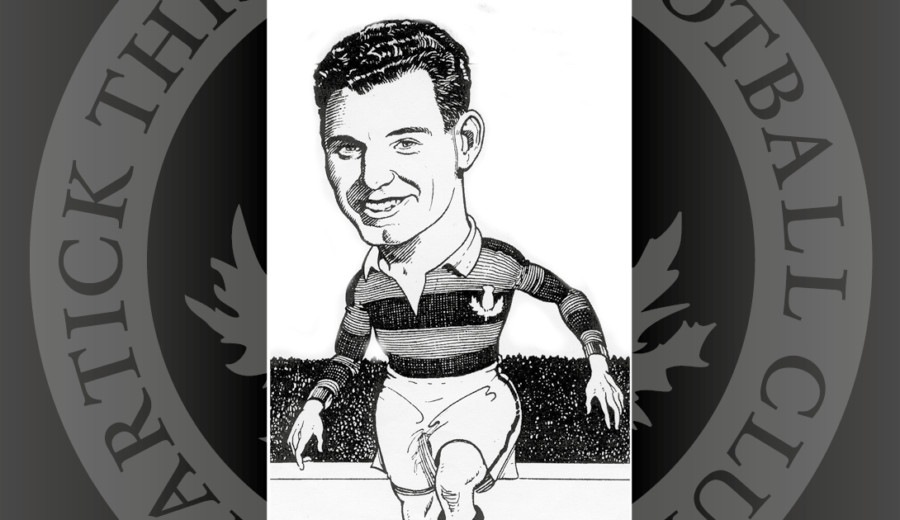 Jackie Husband was a tremendous servant to Thistle. Apart from a brief period as manager of Queen of the South during the 1960s, Jackie spent his entire adult life at Firhill. He signed for Thistle as a player in October 1938 and remained at the club until his death in May 1992; a matter of days before Thistle clinched promotion back to the Premier League. Jackie filled in a number of roles at Firhill ranging from player, captain, trainer, coach, physio, kitman, masseur and mentor.

Jackie’s career began at Yoker Athletic with then Thistle manager, Donald Turner, watching him over several weeks to guage his potential. He spent time in the reserves learning his trade before getting his first taste of competitive action at the end of the season. With the Second World War breaking out, the majority of the Thistle team were enlisted for service, but Jackie’s job on a farm made him exempt from military service. He continued to give his all for a Thistle team that chopped and changed as the war effort was ongoing and when he lifted the Summer Cup as captain of the team in 1945, it was a deserved reward for his service. He earned a solitary Scotland cap when he played against Wales in 1946, although he was also capped in unofficial internationals around this time.

Jackie was always a keen worker around Firhill and assisted 17 different managers in his time at the club. It is therefore a fitting tribute that the East Stand was named in his honour.