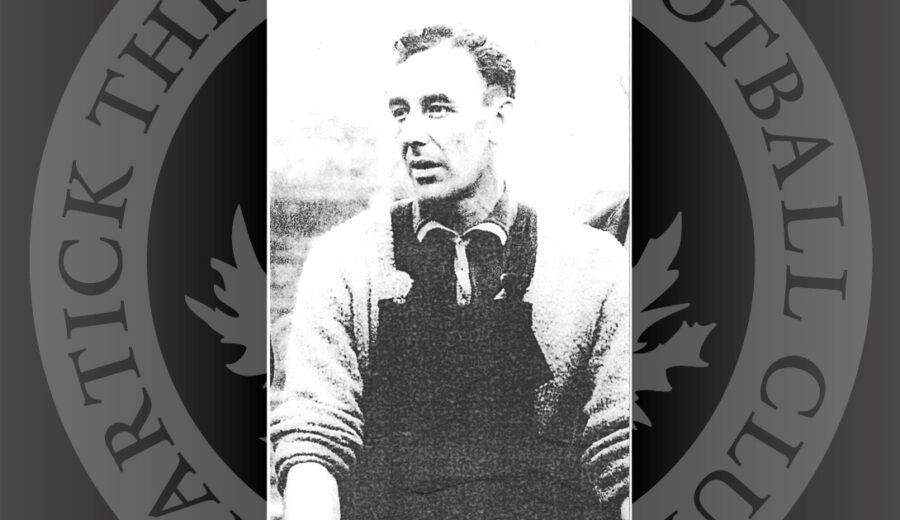 James Anderson Davidson is one of Partick Thistle’s all-time greats.

Helping to aid the Second World War effort by working down the pits as a teenager, football was where Jimmy’s true skill lay and shortly after the conclusion of the war, he signed professional terms with Donald Turner’s Jags. Little did anyone know it, but this would start an association with the club spanning almost 30 years.

Having been picked up from Ayrshire side, Muirkirk, Jimmy would serve his apprenticeship in the reserve side making his initiation into the first team in 1946 for a Victory Cup tie against Clachnacuddin.

A half back by trade, Jimmy’s versatility meant he quickly learned, and mastered, the ability to play the centre half role in next to no time. A fierce competitor, Jimmy emerged into the first team as a regular in 1949 and quickly cemented his place in the side going on to captain an exciting Thistle team which included other Jags legends like Tommy Ledgerwood, Andy Kerr, Johnny MacKenzie, Alex Wright, Tommy Ewing and Davie McParland.

Jimmy’s consistent performances attracted others to try and entice him away from Firhill but Davidson’s loyalty to the red and yellow cause saw him remain in Maryhill, a first pick on the Jags teamline each Saturday. The 1950s were an enjoyable spell for the Jags with high league finishes and a trio of Glasgow Cup successes. Jimmy saw it all in the 50s, from the highs of reaching three different League Cup Finals but suffering the heartbreak of being a runner up in each of the showpiece events.

As a standout in red and yellow, international recognition followed for Jimmy as he earned 8 full international caps. He was a part of the first Scotland squad to reach a World Cup finals when the squad featured in the 1954 World Cup in Switzerland. During his 8 caps, Jimmy found the back of the net for his country, at Hampden no less, in a fixture against Northern Ireland.

After a stellar career which included international recognition, four caps for the Scottish League select, three League Cup Final appearances, over 400 Jags appearances and 46 goals in red and yellow, Jimmy left Firhill in 1960 joining Inverness Caledonian in the Highland League. During his time with Caledonian he played against Thistle in a testimonial fixture arranged to commemorate his service to the club.

Upon retiring at Caledonian, Jimmy returned to Firhill taking on the role of Groundsman continuing to serve the club he had represented so proudly until well into the 1970s.