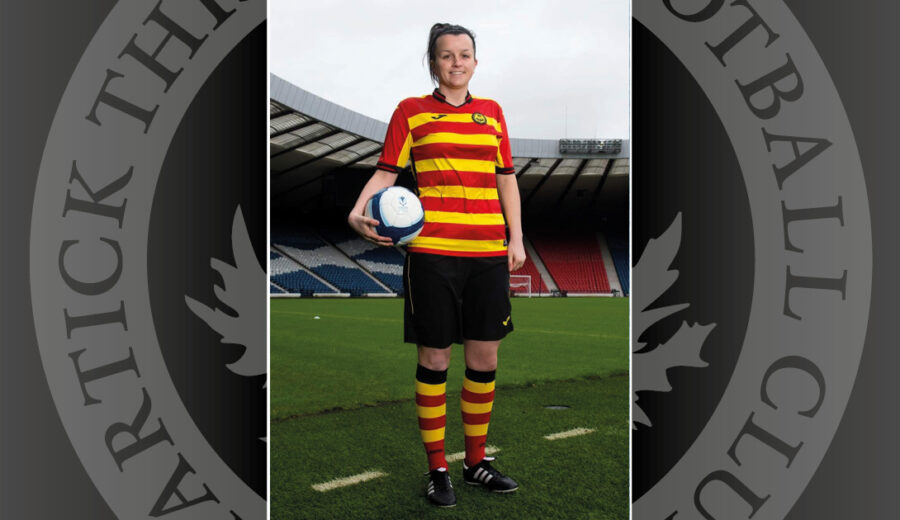 Partick Thistle Women’s Football Club has evolved beyond all recognition since being set up by the Partick Thistle Charitable Trust less than a decade ago.

In 2015, Mhairi Hawksworth joined up with the Thistle Weir Ladies side for their first season under the stewardship of the Thistle Weir Academy. Turning up to train in a gym hall, with no kit and with a group of girls she didn’t know, few could have predicted the legacy Mhairi would leave on women’s football at Partick Thistle.

Mhairi had a firm grounding in football from a young age and started her career as a goalkeeper at Kilwinning Sports Club. Her talent and commitment were obvious from an early age as she earned a pair of Scotland School Girls Under-15 caps against Northern Ireland and Belgium.

Progressing through the Kilwinning academy Mhairi played for the senior women’s team while also captaining Strathclyde University Women’s football team. A brief spell at Bishopton followed before a former team mate invited her to join the newly registered Thistle Weir Ladies side in 2016.

Manager of the side, Ian Cameron, saw Mhairi’s impact on the team through training, moving Hawksworth to a striking position at the top end of the field which immediately paid dividends.

The 2016 season was an incredibly successful one for Mhairi as she finished top scorer in the SWFL 2 Central. A string of impressive performances firmly marked her as one of the first names on the teamsheet and when the Ladies side played their first ever game at Firhill Stadium, it was inevitable that Mhairi would find the back of the net. Fuelled by Hawksworth’s goals, Thistle challenged for promotion and ran out as title winners to start climbing the football pyramid.

The step up in division saw Mhairi continue to flourish as she continued to regularly find the back of the net. Two campaigns later, in 2018, saw Thistle promoted again into the SWPL2 as the club stepped up it’s off-field operation to support the side in challenging at the top of the Women’s game.

Lining up for their first ever SWPL2 fixture against Hamilton, it was fate that the striker who had played such an instrumental role in getting the club there would score the first ever SWPL goal by a Partick Thistle Women’s FC player. The Jags adjusted to the new standard of football with ease and secured a mid-table finish in their maiden season.

Now under the management of Brian Graham, Mhairi was suited perfectly to the style of the new Thistle side and a new record high finish of third place was secured after a promotion battle that went right to the wire. As the squad were preparing for a third season in SWPL2, Forfar Farmingham were unfortunately unable to continue to compete at the top end of women’s football. With an infrastructure that was the envy of many in the game, Thistle were perfectly primed for promotion to SWPL1, just weeks away from the first competitive game against the elite of the women’s pyramid.

It was Mhairi’s third promotion in just six years completing an unbelievable journey for the Club and the striker.

Mhairi made the gut-wrenching decision to leave Thistle last summer having completed six years of service needing to spend time to study for her civil engineering Chartered Professional Review exams. She left the club as the all-time appearance holder while remaining the all-time top goalscorer in Partick Thistle Women’s FC history. The quality and quantity of her strikes in red and yellow left a lasting mark on everyone who has followed the side as they progressed through the professional women’s pyramid. Without the commitment, enthusiasm and dedication shown by Mhairi, and her teammates, Partick Thistle Women’s FC would not currently be competing with the best in the land in SWPL1.