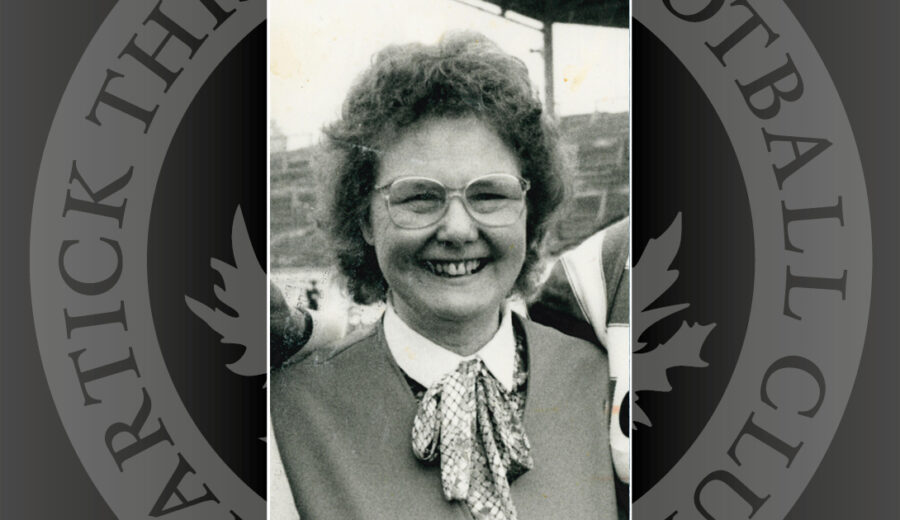 Molly Stallan never scored a goal or saved a penalty for Partick Thistle but over a period of approximately forty years Molly gave invaluable service to the Club across a broad range of off-field duties.

From a Jags supporting family, Molly became aware of a secretarial vacancy within Firhill in the early 1950s. She wasted no time in submitting an application for the job, uniquely desirable in her view because of the Thistle connection. Her enthusiasm for the job was unrivalled and she couldn’t wait to get started once she had learned her application had been successful.

During her tenure in the office at Firhill Molly worked tirelessly for the Jags cause and always with a happy smile. During her time at Firhill there was a window that opened from the office so that Molly could speak to people halfway up the stair from the pavement on Firhill Road. There would be fans galore on match days queueing on the stairs, each with a varying range of requests. The bell would ring, the window would be opened and there would be Molly – with a happy smile on her face, ready to deal with yet another satisfied customer.

No task was ever too demanding or too trivial. Molly would deal with it quietly and effectively in her own way. Over several decades all manner of changes took place, countless players, directors and other personnel came and went, but she remained a bastion of loyalty through good times and bad.

Everyone with any connection to Partick Thistle had a lot of affection for Molly and held her in the highest esteem. She was well thought of not only within the confines of Firhill, but throughout Scottish football as a whole.

When Clyde were groundsharing at Firhill, Molly went out of her way to ensure that they had everything they needed for their own matchdays. She would go on to spend seven years working full-time with Clyde during the 1990s.