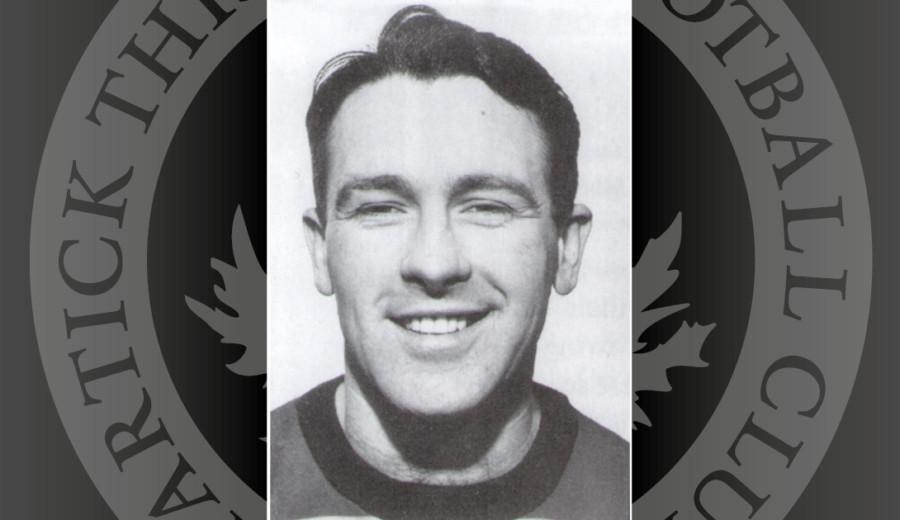 Standing at just 5’ 6”, but with the “heart of a lion”, outside left Tommy Ewing joined Thistle from Larkhall Thistle. His Thistle debut came against Raith Rovers in October 1955 and although Thistle lost 1-2, Ewing clearly impressed as he was rarely out of the side for the remainder of the season or indeed, providing he was fit, for the duration of his time at Firhill.

The following season Ewing, who contributed some important goals on the way there, was part of the Thistle side that suffered defeat in a replayed League Cup Final against Celtic.

He clearly did just that as later the same season he was capped at full international level for Scotland. A victory against Switzerland guaranteed Scotland’s place in the World Cup Finals in Sweden but the Scotland performance did little to offer encouragement. So much so that when Scotland faced Wales a week later the introduction of Tommy Ewing was one of six changes that were made. His inclusion in the side was welcomes by all being described as “small but stocky” and “not only clever but thrustful”.

It didn’t turn out to be the happiest of international debuts though. Scotland produced another poor performance and could only manage a 1-1 draw in front of a small Hampden crowd, with Ewing’s performance labelled as “immature”.

Ewing was given a further chance, while stationed at Ayr with the Royal Scots Fusiliers as part of his National Service, to stake a claim for a place in the World Cup squad when in April 1958 he lined up for Scotland against England at Hampden Park. Optimism in Scotland for this fixture was not high with an easy England win forecast. Those forecasts were proved to be accurate as England cantered to a 4-0 victory. Ewing started brightly and was at the heart of one of Scotland’s few promising moves but as England took a grip of the game he was unable to make much impact. That would be his second and final cap for Scotland and he didn’t make the squad for Sweden.

The next few seasons for Ewing were marred by two cartilage operations and persistent knee problems. Although he played in the 1958 League Cup Final against Hearts his contributions were limited in the last few years of the 1950s.

In January 1962 the Thistle fans were rocked by the news that Ewing was on his way to Aston Villa. It was a bolt from the blue. Earlier in the season Thistle had turned down an offer from Fulham for Davie McParland and it was thought that Thistle weren’t interested in selling their ‘star’ players. An early exit from the Scottish Cup at the hands of Stirling Albion change all that though. After disposing of Hibs, Thistle had lofty hopes of lifting the 1962 Scottish Cup and were big favourites, though away from home, to eliminate Stirling. Ewing though was injured in the midweek encounter with Rangers at Ibrox and wasn’t fit to face Stirling. Thistle lost 3-1 and a few days later an offer, thought to be in the region of £20,000, from Aston Villa was accepted and Ewing was on his way down south. Although the Club denied it, it was widely thought that Thistle’s defeat at Stirling and subsequent financial problems hastened Ewing’s departure from Firhill.

Ewing spent two seasons with Aston Villa before returning to Thistle in the summer of 1964. If anything Ewing was thought to be an even better player than he had been prior to his departure, a fact borne out by the statistics in his first season back at Firhill. He missed just three games and topped the scoring charts with 23 goals including hat-tricks against Ayr United and Airdrieonians.

Season 1965-66 was altogether less successful with injury keeping Ewing out of the team for huge chunks of the season. His prodigal return to Firhill lasted just two seasons and the following season saw Ewing line-up in the colours of Morton. From Morton he moved to Hamilton eventually taking up the role of manager at Douglas Park.