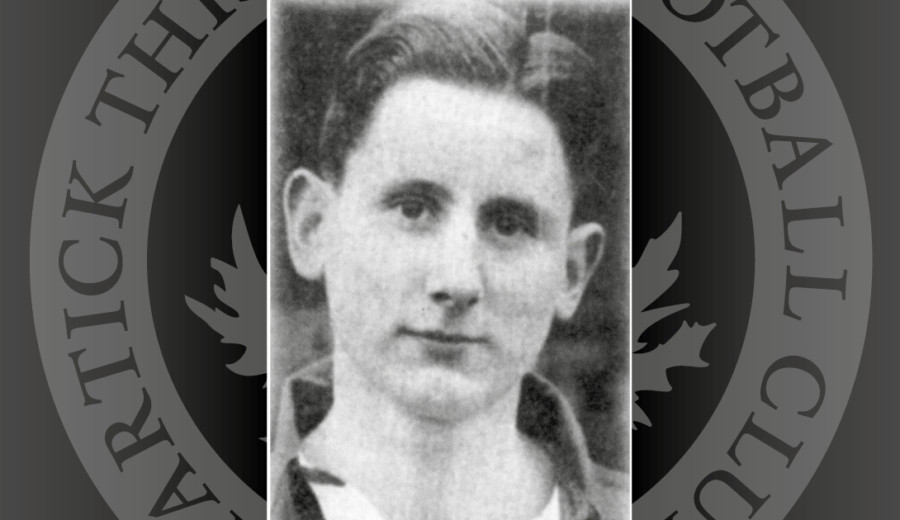 There are many reasons why Willie Sharp is considered a Partick Thistle legend. His 571 appearances showing that he has played more game for the club than all but Alan Rough, Davie McParland and Jackie Campbell. In addition, no other player has scored more goals than Willie; 228 in the 17 years that he was at Firhill. Thistle was Willie’s only professional club in a remarkable career in which he reached seven cup finals. Perhaps most of all Willie is best known for a goal that might now seem unremarkable were it not for that it was scored with just seconds from the start of the game.

On 20 December 1947, at 3pm, the referee’s whistle started Thistle’s game against Queen of the South. David Mathie kicked off to Kenny Chisholm , who flicked the ball back to Hugh Brown. The half-back sent a long ball through the middle for Mathie to chase. With the defenders watching the centre-forward the ball ran on to Sharp, and with a low shot, the ball was in the net, just a matter of seconds after the game had started.

The goal took the watching reporters by surprise. Some estimated the time taken as five seconds, some six, some seven. The general verdict was “the quickest goal we ever saw”, and still remains a Scottish record.

Willie signed from Shettleston Juniors in May 1939 as an inexperienced but highly thought of potential replacement for John McMenemy (son of Jimmy McMenemy) who had moved to St Mirren, and who Thistle hadn’t adequately replaced.

Initially Willie struggled to make an impact too. He wasn’t selected for the annual trial match for either the likely first team or the reserve team, and he struggled to get a regular game in the reserves throughout 1939. However, in due course he did impress manager Turner, and thanks to wartime demands on the regular first-teamers, made his first League appearance in March 1940, also scoring a debut goal, against Celtic. He also scored on his next two appearances, and missed just five games of the remaining fourteen, establishing himself as a young but established member of the team. He finished the season as second top scorer despite having played less than half the available games.

Willie was a slight lad, just 5’ 8” and ten stones, when he joined the club, but what he lacked in weight he made up with brains and footballing skill. The newspapers paid tribute to Willie. One described him as an “artful ball-player and schemer” while others paid tribute to his “weasel like manoeuvres” and “bewildering dribbling”. Although signed as an inside-left, Willie was capable of turning out at centre-forward and as an inside-right, later in his career, plus an eye for a goal as his scoring statistics record. He also had an eye for a defence-splitting pass to his wingers, as Alex McSpadyen, Jimmy Walker, Johnny MacKenzie and Tommy Ewing could attest and he collected a large number of “assists” as a result.

By the start of the 1940-41 season Willie was well and truly established as Thistle’s number ten, and he remained there until 1945, when his forward partner Willie Newall departed for Morton. Willie moved to centre-forward with great success until the arrival of Davie Mathie from Clyde at which time he moved back to inside-left. During those war years Willie led Thistle to a Charity Cup Final against Rangers in 1941 (lost 0-3), a Southern League Cup semi-final n 1942 against Morton ( 1-1 draw, followed by a 0-1 defeat) and the Summer Cup Final of 1945. Willie had missed most of the Summer Cup run, but returned for the final against Hibs, replacing the unlucky Dougie Stockdale and helping Thistle to a 2-0 win.

In 1950 The Sunday Mail wrote, “Sharp is a zestful player and has become the idol of Maryhill. His dazzling distribution and subtle scheming must take him close to international honours”. Unfortunately he would remain “the finest player to never win a Scottish cap”. He did, however, play for the Scottish League in 1952 – a 0-3 loss to the Welsh League.

The international selectors may not have valued Willie but he was valued by top English clubs. In February 1950 Burnley offered £15,000 for his signature – a fee that would have been a world record – but were told that Willie was not for sale.

It was a bold and brave move by the Thistle directors to turn down such a sum of money, but Willie repaid their confidence in him with splendid form in 1950-51. He missed just three games out of 48 played, winning a Glasgow Cup winners medal when Thistle beat Celtic 3-2 at Hampden.

The early 50s were a time of consistent team selections for Thistle with the likes of Tommy Ledgerwood, Jimmy McGowan, Bobby Gibb, Jimmy Davidson, Jimmy Walker, Alex Wright and Davie Mathers appearing on the teamsheet seemingly every week. Willie, of course, joined them, and in a remarkable spell between August 1950 and May 1954 missed just eight league games. Willie was described as “the brains of the attack”, complimenting the speed of Walker and the strength of Alex Stott. This kind of consistency – being able to regularly pick players of great ability- took Thistle to yet more cup success.

In 1952 Willie scored the semi-final goal that took his team to a Glasgow Cup Final against Rangers and a 3-1 win. The following year Willie scored four goals in the qualifying rounds as Thistle reached the League Cup Final before a 2-3 defeat to East Fife, while another cup final defeat occurred in 1956 when Third Lanark beat Thistle in the Charity Cup Final, despite a goal from Willie.

By the time the 1956 League Cup run came round Willie’s appearances were becoming limited. He did appear in the semi-final game against Dundee, but the consistent team of the early to mid 50s had begun to break up, and at 34 years of age Willie was unable to command a first team place.

Willie played his last game for Thistle against Kilmarnock on 9 February 1957, retiring from football at the end of the season.