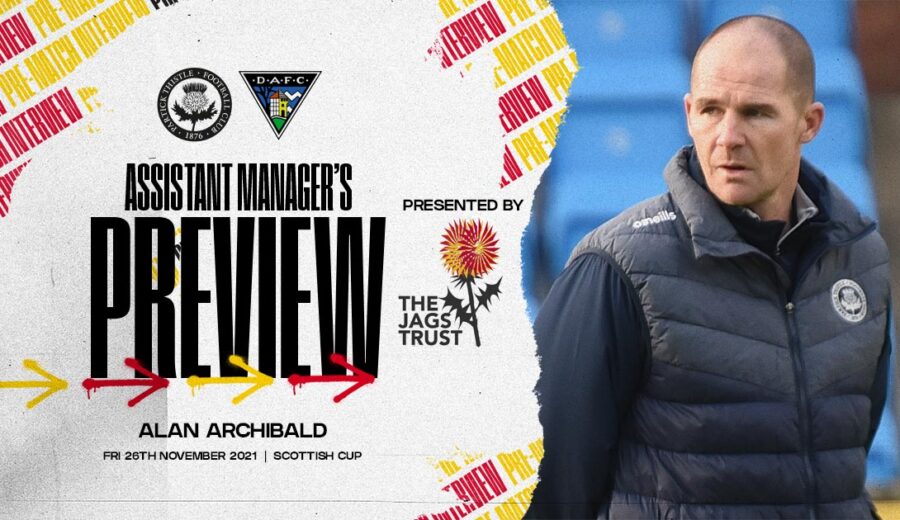 Partick Thistle’s 2021/22 Scottish Cup journey gets started this week as they take on Dunfermline Athletic at Firhill in a Friday night clash. The Jags haven’t lost since they were last in cup action, losing 2-0 to Queen of the South in the Challenge Cup eight games ago. They were 1-0 winners against Hamilton Accies last weekend, breaking the club’s record for league clean sheets on the bounce in the process. Now they prepare to do battle with a familiar foe as Dunfermline make the trip to Maryhill for the third time this season and Thistle assistant manager Alan Archibald spoke to ptfc.co.uk ahead of the tie:

“It’s a very happy and confident dressing room at the moment. When you’re winning games, everybody has a smile on their face when they come in and that’s definitely the case just now.

“You now can’t wait for each game and that’s a great thing. Training has been at a great level and that’s from everyone in the squad not just the guys who’ve been starting so we’re pleased with that. Now we just need to make sure we continue that and carry it into this cup game which will be a tough one.”

Dunfermline have recently changed manager with John Hughes arriving at East End Park and Archie reckons we should expect to see quite a different Pars side compared to the one we faced last month.

“Well, they certainly seem to have got the bounce from the new manager – big wins against Inverness and then Ayr which shows you the impact John’s having already. He’s made a few changes and it seems to be paying dividends so we’ll be expecting a really difficult night.

“There are still things that we can take from the previous games we’ve had against Dunfermline but we do think they’ll be quite different coming here this time than they had been previously.”

A lot of the Jags’ recent success has been built on their defensive form and Alan is keen to see the team continue that solidity as we move into the Scottish Cup.

“It’s something that the players should be very proud of because it’s never easy to keep a clean sheet in the Championship so to get six in a row is brilliant. Everyone plays their part too, from the guys up front all the way back to Jamie in goals, it’s a team effort.

“Looking at the game at the weekend for example, earlier in the season we might have struggled as Hamilton put balls into the box late on but now we have that confidence and composure in defence to hold out as we did and I can’t remember Jamie really having a save to make.”

As the Maryhill men seek progression against the Pars, Archibald says there’s still a considerable excitement among the players about competing in Scotland’s oldest cup tournament.

“The Scottish Cup always brings that buzz. Its early days of course so no one’s dreaming of Hampden quite yet but the boys are still looking forward to it. The fact that it’s a Friday night game also gives it a bit of a unique feeling.

“You want to go as far as you can. Cup runs tend to bring a lot of great moments for the players and the fans and, of course, there’s prize money to be won for the club with each round so that’s a bonus as well.”

JagZone subscribers will be able to tune in to live audio commentary for our clash with Dunfermline, starting at 7:15pm – click here to tune in.