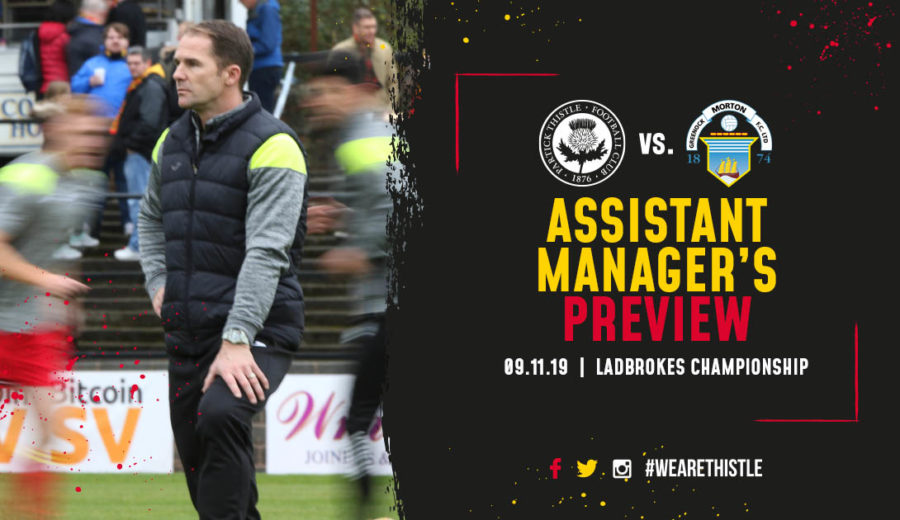 Partick Thistle return to the Energy Check Stadium at Firhill tomorrow afternoon looking to pick up three Ladbrokes Championship points against Greenock Morton. Assistant manager Alan Archibald spoke to ptfc.co.uk to look ahead to the match.

“It was a really tough start to the week with a lot of disappointment after last weekend’s match against Ayr United. The players know how quickly we can turn it around. We’ve got to show how much it hurt us and work hard against Greenock Morton to get our first league victory at home and get that under our belts.

“We’re only focusing on ourselves, what Morton have done isn’t our concern. We’re just looking to put it right for our fans. In our last home game against Arbroath we had the chance to push on and win the game and we let down almost 3,000 home fans. They’ve been incredibly supportive since we came into the club and you can see they are determined to do their part to give us success but it is very tough to take when we’re not getting results in front of them.”

After such a disappointing performance last week, Archie is looking for the side to deliver a response against the side in 8th place tomorrow afternoon.

“We touched on it after the game and it’s something we’ve looked at. You can’t even put it down to tiredness as usually you’d have one or two players playing really well and the rest dropping, we were just collectively very poor. We’re looking to get back to being hard to beat and playing like we did against Dundee United.

“Training has been of a very high standard all week. It should be like that all the time, rather than just when there are lots of slots available on the pitch. Nobody’s place is safe after such a bad performance. We’re looking for players to step up and go and grab a jersey.”

The club received a trio of international call ups this week with Osman Kakay heading off to Sierra Leone while Shea Gordon and Cammy Palmer will depart for Northern Ireland. The trio will head off after tomorrow’s match and Archibald knows it can only be a good thing for the players.

“It’s very good for them to go and play for their countries, everyone wants to be recognised and called up by their nation to play. I think it can also be slightly frustrating for them as well as our games will continue which led to young Cammy losing his place in the team last time when he went away with Northern Ireland. We’ve got three players away on international duty but we’ve got a big squad and we’ll be playing the Stenhousemuir game as planned. They will be a big miss for that match but we have quality players in the squad who will want to go and stake their claim going forward.”

Finally, Alan updated us with team news for tomorrow’s game.

“It’s only the long term ones of Alex Jones, Mitch Austin and Callum Wilson who are unavailable for tomorrow’s game. Everyone else is fit and eligible for selection.”