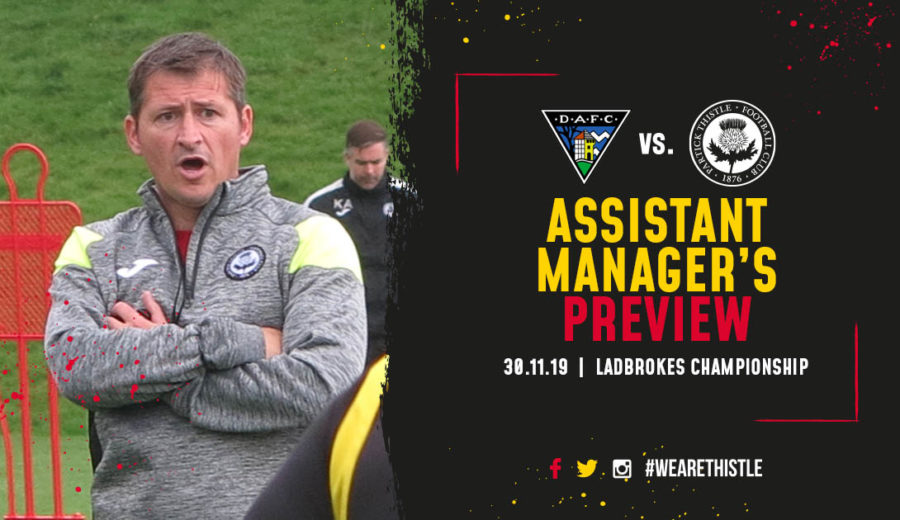 It’s back on the road this weekend for Partick Thistle as they take on Dunfermline Athletic. The Jags lost on two visits to East End Park last season but will be hoping to take three points from Fife this time round as they look to lift themselves off the bottom of the Championship table. Thistle’s three-game winning run ended in midweek as they drew with Alloa Athletic in Maryhill but the game against the Pars offers an immediate chance to return to winning ways heading into December. Jags assistant, Neil Scally spoke to ptfc.co.uk ahead of the clash with Dunfermline:

“It’s going to be a tough game without a doubt. East End Park is never an easy place to go but we feel we’re well-prepared and the boys are confident we can get a win. The game in midweek felt like an opportunity missed for us but we believe we can go to Dunfermline and win.”

Thistle only managed a 1-1 stalemate against Alloa during the week despite dominating the game but Scally is hoping the team can carry the positives from that game into this Saturday’s fixture.

“We were on top for most of the game and had some really good chances that we probably should have taken. We hit the bar twice and had a couple of other good opportunities that might have gone in on another day.

“Nevertheless, we felt encouraged by the performance and the players are still feeling confident. It’s four games unbeaten and we want to keep that going for as long as we can.”

Dunfermline didn’t have a midweek fixture to play like Thistle did and Scally reckons you could say there are benefits on both sides of that coin.

“It’s one you can look at either way. They’ll have an extra few days rest and preparation but we’re in the rhythm of playing games. Probably the biggest problem with playing in midweek is any extra injuries you pick up but as a player, I always preferred playing Tuesday-Saturday-Tuesday.”

Stuart Bannigan is back from suspension for the game against the Pars and Neil says it’s a welcome return for the number eight.

“Banzo is one of our most experienced players and he’s very talented as well so of course we’ll be pleased to have him back. There’s good competition in the midfield though. Reece Cole has been impressive over the past few games, we know what Cammy’s capable of and Craig Slater is now just about back to full sharpness so it’s good to have all those options to choose from.”

Scally finished by giving us an update on squad fitness ahead of the trip east.

“First of all, Foxy came out of the starting line-up late on Tuesday and he’ll be touch-and-go for tomorrow. Lewis Mansell and Ryan Williamson also have knocks so they’ll be assessed ahead of the game too but to offset that, we had Alex Jones back in the squad on Tuesday and it’s like having a new player so he’s got another week’s training under his belt and he’s another week closer to playing.”