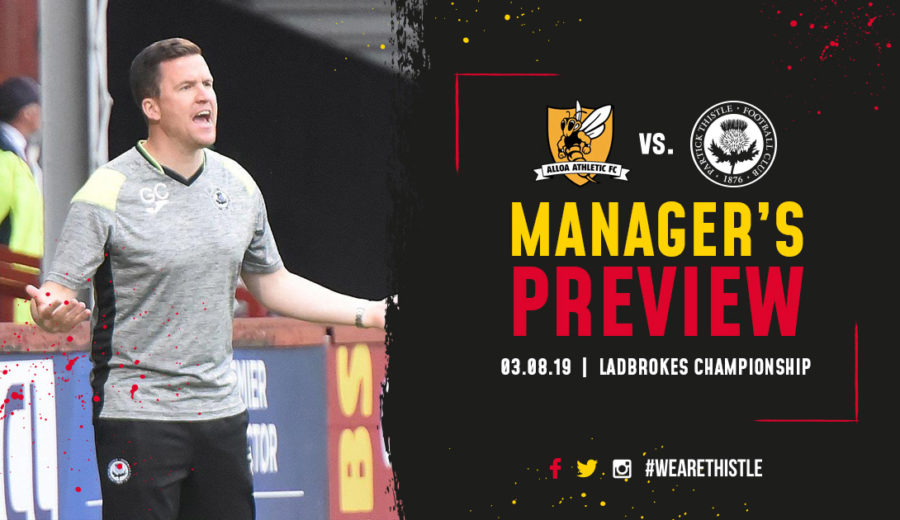 With the first fixture of the Ladbrokes Championship season now just hours away the sense of excitement around the Energy Check Stadium at Firhill is palpable. At the centre of that, Jags boss, Gary Caldwell, is doing his best to keep everyone calm and focused going into the new campaign.

The gaffer took time out of his day to speak to ptfc.co.uk and gave the latest news on his squad ahead of the trip to Alloa.

“We’re really looking forward to it. We’ve worked really hard since 13th June and we’ve had a great start in the Betfred Cup so confidence is high. It’s now about turning that preparation into performances, points and wins as we enter the league campaign.”

Alloa were a side that, under Jim Goodwin, built a reputation for effective, well organised but not particularly attractive football last season. although that style brought them an impressive eighth place finish, Caldwell believes they will be a different proposition this term.

“I think they will be a different side this season. They have a new manager, a new style and have even widened their pitch which gives some indication as to the way they are going to play. I think we will see them try to pass the ball more, trying to play more and we need to be ready for that because they have caused teams problems already with the way they are trying to go about their business.”

The Betfred Cup group stage has traditionally been a relatively happy hunting ground for Thistle and this season was no different as the Jags topped their group which, for the first time, featured a top flight team. The success so far in the competition provides a springboard that Caldwell is looking to make the best use of in the early stages of league competition.

“We’re really pleased with how our pre-season period has gone. It has been very effective and we’ve taken a lot from it. Playing competitive games this early is certainly a challenge but we’ve managed to top the group which was fantastic.

“We came in early so that we knew we would be ready for that group stage campaign but we also brought the players back early to get our tactical points across, build a team spirit and make sure everyone knew how we wanted to play the game. Obviously there is always a physical aspect to pre-season but, for me, the other aspects are just as important.

“It’s now down to us to take that form into the league campaign and maintain that winning mentality as we look towards the rest of the season. It has been a good start but it is only that; a start. We now need to make sure the hard work up until now doesn’t go to waste.”

Evan Galasso was one of a number of Thistle Weir Youth Academy graduates to have an impact on the first team during pre-season and time on the pitch for young Jags is something that remains at the forefront of the manager’s mind.

“I think Evan did very well against Airdrie and the likes of Callum Wilson have really impressed in training as well. There are one or two others who aren’t far away from that first team level but they have to keep working hard to earn that right. Competition for places is high and we won’t throw them in if they aren’t ready.

“I won’t put players on the bench or on the pitch if they don’t deserve it. We have to create a culture where everything is earned and that is especially true for those players coming through. If any other player from the Academy is showing the right level of ability and attitude then we have shown that we will give them opportunities.”

Finally the manager gave us the team news, including a disappointing new injury for youngster Callum Wilson.

“Callum Wilson unfortunately dislocated his shoulder in a game for the reserves in the week which is really unfortunate because it will probably mean he misses a number of months.

“The good news is that James Penrice is back training having missed the Clyde match at the last minute. everyone else has been training as well but it’ll come too soon for Mitch Austin I think. Mitch is on an individual programme just now so he is working extra hard to make up for the time he missed during pre-season, he is progressing really well though so hopefully we’ll see him in a Thistle top soon.

“Craig Slater had a wee setback unfortunately as a small infection got into the wound from the operation. Hopefully we’ll see him back on the grass running soon but it will still be a few weeks before he is able to get back training again.”

A more in-depth video interview with Thistle manager, Gary Caldwell, is available to watch on JagZone now as well interviews with Tam O’Ware and Lewis Mansell.

Can’t make it to the Energy Check Stadium at Firhill? Jagzone members can listen to live audio commentary of the match. JagZoneLIVE begins at 19:30 tomorrow.