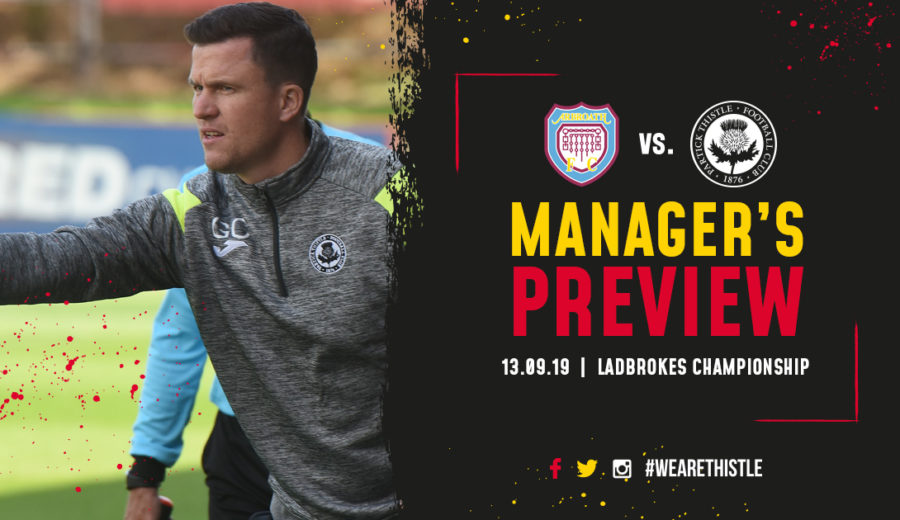 Partick Thistle returned to winning ways last Saturday in the Tunnock’s Caramel Wafer Challenge Cup against Montrose and are now looking to carry that into the league as they take on Arbroath at Gayfield Park. The Jags are yet to win a game in this season’s league campaign and, as a result, sit bottom of the Ladbrokes Championship after four fixtures. However, a win in Angus this week would carry the Maryhill Men up to seventh ahead of Saturday’s matches. Thistle boss, Gary Caldwell, spoke to ptfc.co.uk ahead of the clash, beginning by discussing the threat that the Red Lichties pose:

“They’re a team who have shown they know how to win games. Firstly, in gaining promotion from League One and then through their good start to this season. They’ve carried that momentum from winning the title and started the league season in good form so we’ll have to be ready to compete if we want to get the three points.

“Gayfield is an especially tough venue to go and play at. When I watched their game against Dunfermline, I thought that the weather really affected the match on that day so we know what could face us when we get up there and are ready for whatever environment we’re playing in.”

It’s Jags’ third Friday night game of the season in front of the BBC cameras but Caldwell is hoping for a better showing than in the previous two when Thistle managed to lose from winning position against Dundee United and Morton.

“It’s all about getting our first three points of the season. We really need something to kick-start our league season because although we haven’t performed terribly overall so far, we’ve been poor in the key moments and that’s cost us so we have to be aggressive and look to win this game.”

Despite Thistle’s league position, Gary feels that if his side can put together a run of results, then they will be battling at the top end of the table before long.

“If there’s one thing I’ve learned about this league since I’ve been here, it’s that two or three wins can make a huge difference to your position in the league and that’s especially true early on in the season as we are just now. However, to go on a run, we need that first win and we’re looking to set ourselves on the right path with a good performance and a win against Arbroath.”

The gaffer finished by giving us an update on the Jags squad with a couple of faces making a return this week.

“Cammy Palmer will come back in from international duty which is great and Dario Zanatta comes back in after being cup-tied last week. Unfortunately, both Shea Gordon and Stuart Bannigan are still suspended and Alex Jones had some bad news from his ankle scan. We’ve not spoken to a specialist yet but he’s likely to miss two or three months.

“I thought Dario was fantastic on his debut and he’s been great in training as well. The players are excited about the thought of playing alongside him and we need to find the best way to utilise him and get him on the ball because he’s the kind of players who can decide matches.”

More exclusive preview interviews with Kenny Miller, Tommy Robson and Jags manager, Gary Caldwell, are all available to JagZone subscribers – log in to see them.

Can’t make it to the Gayfield Park? JagzoneLIVE will bring you coverage of the full 90 minutes through our audio commentary service which begins begins at 6:50pm – you can listen in here.