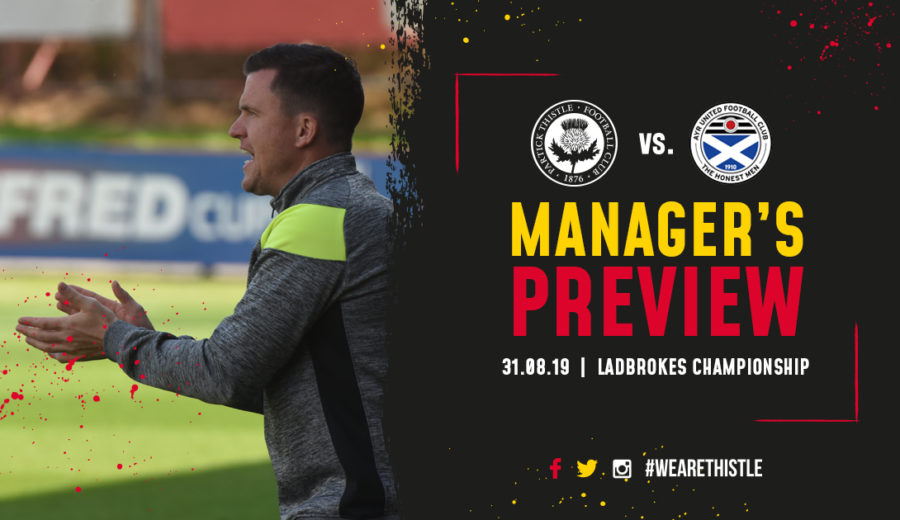 With the disappointment of Cappielow fresh in his mind, Gary Caldwell knew it was vital that his side learned from last week’s mistakes and kicked on ahead of a tough home match against Ian McCall’s Ayr United this Saturday.

A winning run out against Rangers in the Glasgow Cup gave some of his first teamers the chance to put the Morton game to bed and, as he explained when he poke exclusively to ptfc.co.uk, a good week with some key lessons have left him in confident mood ahead of the visit from the Honest Men.

“I think we need to learn from the game. It’s clear we made mistakes, particularly in the second half and we need to make sure they don’t happen again. It was a hard weekend analysing the performance and trying to work out what went wrong but we’ve done that now and we’ll look to move on from it.

“We’ve had a really good week and the game against Rangers on Tuesday night gave us a chance to get the boys back out onto the pitch and move on from the Morton result. Even though it was a Glasgow Cup tie I was pleased with the performance and the result against a talented young Rangers side. Winning games in any competition breeds confidence and the aim will be to take that into this Saturday.”

This week has seen two new faces join the club, in the shape of Ben Hall and Dario Zanatta. The manager gave us an explanation of how each player would contribute to his squad.

“We were absolutely delighted to get the two lads over the line and it was great that the board were able to give us the funds to do that. Ben had been training with us for a few weeks and tight from the first day you could see the kind of quality that he had. He did well when he broke through at Motherwell but then it’s fair to say his career maybe stalled a bit when he went down south.

“Since coming back up the road though, both in training and on Tuesday night, I think he has shown the real quality that he has and I can see a very good career ahead of him if he can achieve the potential that he has.

“Dario was someone we had been chasing for a long time and have been in regular contact with Hearts about his availability. When the funds were made available to us he was our number one target so we’re really happy to get him in the door.

For me, Dario is a player to get excited about. He can carry the ball from one end of the pitch to the other and is the kind of player who will get supporters up out of their seats. We can’t wait to see him in a Thistle shirt and I’m sure our fans will be looking forward to that too.

“Both of the new signings will come into the squad for Saturday but we’ll need to wait and see in terms of how involved they will be. Ben obviously played 90 minutes on Tuesday and Dario hasn’t had a lot of time training with us but we’ll wait and see what Saturday brings.”

News broke this week that Mitch Austin had undergone surgery again sparking fears amongst Thistle support that the flying Australian winger was set for a long term spell on the sidelines. Although he admits the summer signing has met a setback, Caldwell insists that the number 77 will not be put too far off track.

“When Mitch first came over he had a bit of bruising around the knee. We investigated that at the time and it was nothing major, but during the course of his rehab he’s had a couple of issues and something wasn’t quite right. We sent him in to the surgeon who had a look and tidied a couple of things up so hopefully he shouldn’t have any more issues.

“We’ll check in with the surgeon again after a week or so to get the OK for him to get back running and from there he’ll hopefully only be two or three weeks before he is available. Obviously it isn’t ideal but we’re all excited about seeing him play for us.

“Other than Mitch it’s just the longer term ones who are out – Harkins and Slater. Everyone else should be fit and ready to go.”

A fantastic campaign last year saw Ayr claim a great deal of credit and, while their run didn’t ultimately end in promotion, they were a formidable side throughout the campaign. Despite many predicting McCall’s side would fade away following the departures of Lawrence Shankland and Michael Rose a start to the league that reads two wins out of three would suggest otherwise.

No matter what the form table says, the Jags boss knows Saturday’s opponents are not to be underestimated.

“Every game in this league is a tough game but I truly believe that when we are at our best we are a match for absolutely anyone in this league. We need to look at the Ross County game, the first half against United, how we went in front against Morton and if we can put that together then we can win the game on Saturday. Having said that, we know that if we are anything but at our best then Ayr will punish us.

“We are very disappointed with where we are after three games, make no mistake about it. Where we find ourselves now though is a position where we can’t do anything about those games, we need to look forward and affect what we can which is Saturday. If we play as we know we can, if we are aggressive with and without the ball then we are a difficult team to play against and we will win games.”

A more in-depth video interview with Thistle manager, Gary Caldwell, is available to watch on JagZone now as well interviews with Joe Cardle and Alex Jones.

Can’t make it to the Energy Check Stadium at Firhill? Jagzone members can listen to live audio commentary of the match. JagZoneLIVE begins at 14:45 tomorrow.