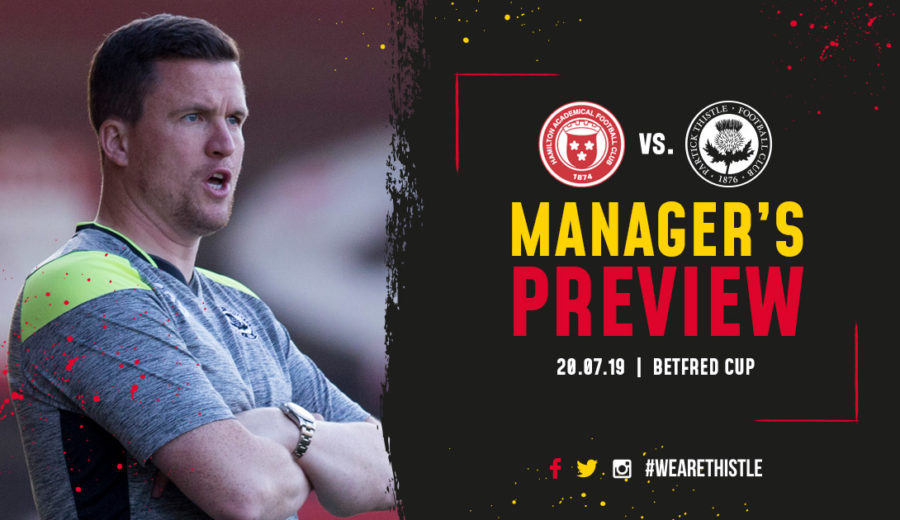 Saturday sees Gary Caldwell’s side take on Hamilton Accies in Thistle’s third match in the Betfred Cup Group Stage. A win could see the Jags secure their place at the top of the group but the Thistle gaffer knows it will be no easy task.

Caldwell spoke exclusively to ptfc.co.uk ahead of the game and started by looking back on the first two games his side has faced in the competition.

“The first two games have both been really challenging fixtures which is exactly what you want at this time of year. Saturday’s match against Accies should, on paper, be the toughest challenge and we probably will have to play better than we have done so far but we have the confidence and belief that we can go there and win.

“Accies have kept their place in the Premiership for a number of years now and there’s a reason for that. They are a good team with great experience and we know what threat they will bring. It’s up to us to match that.

“The Scottish Premiership is ultimately where we want to be so tests like the one we will face this weekend will give us a good idea of where we are. What’s more, a win will take us another step forward towards winning the group which is exactly where we want to be at the end of the game against Clyde.

Caldwell spen Thursday night in the Alan Rough Lounge speaking to more than 150 Jags fans about various aspects of the Club. Some lively debate and interesting discussion came through and it is something the Thistle boss is keen to do more of in the future.

“I love events like that and I think it’s really important for me to meet as many fans as I can. I enjoyed talking football and explaining my thought process and I hope those who were there took something positive from it. That kind of communication is really important and I certainly hope that we can have a few more similar nights like it in the coming months.”

Finally Caldwell gave us the all important team news ahead of Saturday as well as offering an update on Gary Harkins who went under the knife for an ankle operation this week.

“We’re in a great position in terms of fitness with everyone available for the Accies game. There were a couple of knocks and niggles after the last game but thankfully after 24 hours they’ve all settled down.

“The only player who will be missing is Gary Harkins. He had to go into hospital for an operation on a long standing ankle injury this week. He’s felt it since last season and has probably played when maybe he wasn’t fully fit. He tried to work through it in pre-season but struggled so it was definitely something that needed done.

“In terms of recovery I’m always reluctant to put an exact timescale on it but the surgeon recommends eight to nine weeks so hopefully it won’t be too much longer than that.”

A more in-depth chat with Jags boss, Gary Caldwell, as well as exclusive preview interviews with Cammy Palmer and Steven Saunders are available to Jagzone subscribers – log in now to see them.

JagZone members will also be able to watch extended highlights of the game.

Can’t make it to the Foys Stadium? Jagzone members can listen to live audio commentary of the match. JagZoneLIVE begins at 2:45pm tomorrow.