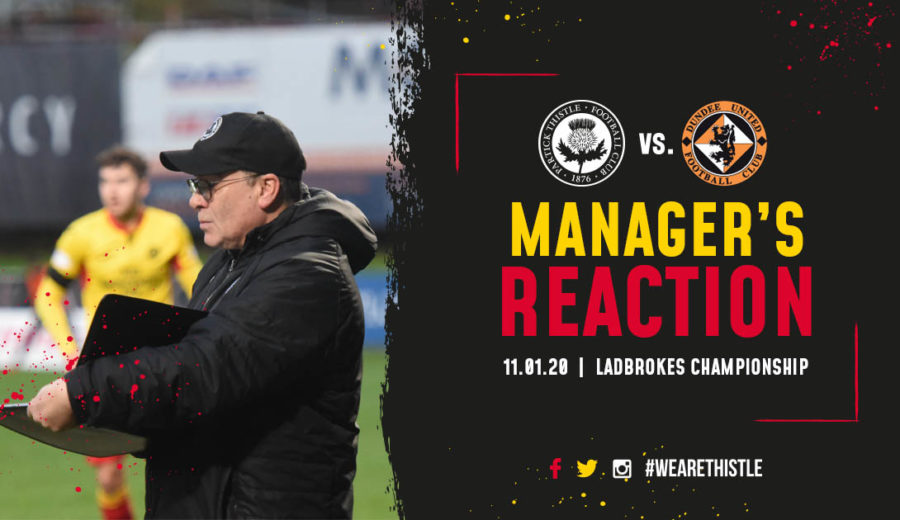 Dundee United were the first visitors to the Energy Check Stadium at Firhill of the 2020s as they visited Maryhill on a rainy January afternoon. The visitors ran out winners at the end of the ninety minutes, aided by a Lawrence Shankland hat-trick and Thistle gaffer Ian McCall spoke to ptfc.co.uk shortly after the full time whistle.

“I felt that for first 30 minutes it was the best we’d played at Firhill. I thought we were terrific for that opening spell. We had a couple of good chances that we should have taken, we didn’t and we were punished for it later in the game.

“We selected a very attacking team, which we were slightly hamstrung into doing and that left us a little bit open at the back. If you don’t get the first goal in the game then it makes it a lot harder.”

Thistle created a couple of opportunities in the opening spell of the game and the gaffer felt not taking those chances was the key to the game.

“They played a high line which we got behind a lot. Some of the runs we couldn’t time correctly but other times we were right in and we had a couple of great chances falling to Dario Zanatta and Kenny Miller that we need to take.

“We should have been ahead in the game but after that United picked us off. In the second half we were very poor and been punished by a clinical striker who could be playing for any team in Scotland. It was a very tough 45 minutes for our supporters.”

The opening goal arrived from a corner kick and Ian was disappointed around the manner that first strike arrived.

“It was disappointing to concede from a set piece. If it had been a bit of outstanding skill or a bit of brilliance then it would be easier to take. We knew the threat they have and you need to mark them closely and we didn’t do that. The most frustrating thing was that there is a lot to like about how we played for the first 30 minutes, which is a third of the game. We couldn’t build on our promising start.”

While the manner of the defeat was extremely disappointing the gaffer is keen to get back on a good run in the league as quickly as possible.

“We’ve been on a good run, it’s only our third defeat in eleven games. It’s a sore one to take because we are at Firhill and we want to show our fans just what we can do. The second half were a non-event after the two goals in the last few minutes of the first half killed the game.

“The fans came out in numbers today, there was over 4,000 at Firhill which was great to see, especially on a day that was so bad weather wise. We’re frustrated that we couldn’t send them home happy to let them enjoy the rest of their weekend.”

A more in depth video interview with Ian McCall is available to Jagzone subscribers now as well as reaction from Mitch Austin – log in to view.