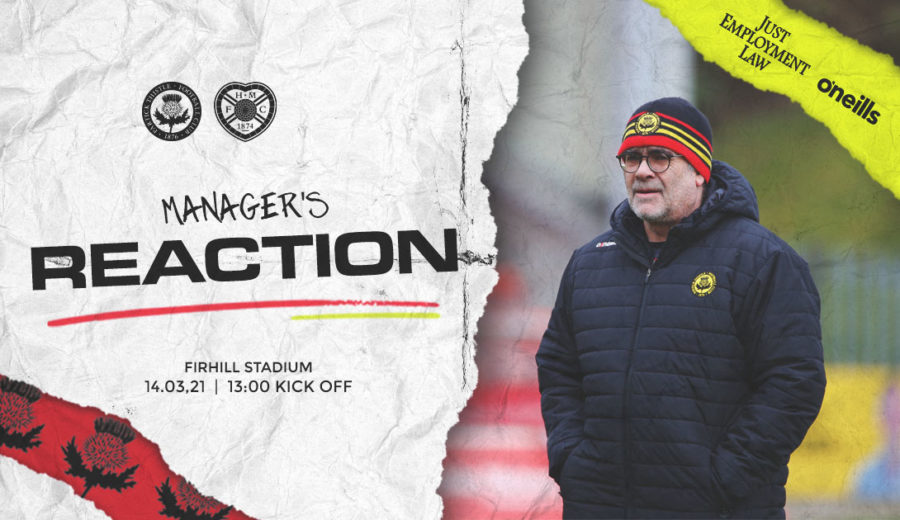 It’s been over two months since Partick Thistle were last in action with a Boxing Day trip to Falkirk the last time Thistle took to the field. The visit of Hearts to Firhill, with a sprinkling of international experience in their side, saw Ian McCall’s men take to the pitch once again and ptfc.co.uk spoke to the Thistle gaffer after the match.

“I thought there was a lot to like about it. I thought in the first half we were excellent. We had three great chances and scored one of them. Shea did really well with his run and it was a good finish into the corner of the net. It’s a dying art the runs he makes and he was unlucky with a couple in the first half of the season but that will do his confidence the wonder of good.

“There was rustiness and there will be tiredness but we got everyone a bit of gametime on the pitch which was the purpose of playing. It was a tough match against players who have been training right through the time we’ve been away.”

Ross MacIver partnered Brian Graham up front with the loanee putting in an impressive performance throughout the first 45 minutes.

“We went with Brian and Ross upfront and they linked up really well. Ross had a couple of good opportunities and that is encouraging. They did really well and they wanted to keep playing into the second half but that wasn’t the purpose of today’s game. We had to get as many minutes in as many player’s legs as possible because we’ll need every single player over the rest of the season.

“For most of the players we got 45/60 minutes in the legs and that will be important ahead of the re-start next week. Ciaran McKenna was playing only his second game in six months so there will be rustiness about but that is the same for every team. It was important to get a game before we started competitively again and Hearts gave us a really good game.”

Ahead of next Saturday’s League One opener, Ian was pleased with some of the performances on the Firhill turf.

“There were a lot of good individual performances in the game today. I thought the front two were lively and worked well. Defensively I thought Darren Brownlie was excellent and Mouhamed Niang had a good game too. We changed things up and used all ten substitutes so that caused the second half to get a bit flat but we needed to get everyone gametime. There is a long, long way to go but it was a good start.”

Further reaction interviews with Thistle gaffer Ian McCall and Mouhamed Niang will be available for JagZone subscribers to watch – log in to view.

We’ll also have extended highlights and a full game replay of today’s match on JagZone over the next 24 hours.