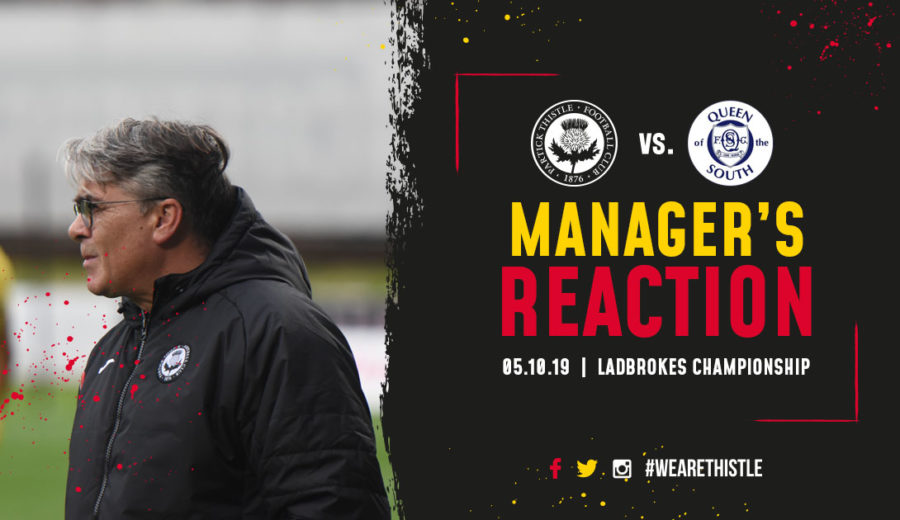 It was a return to the Energy Check Stadium at Firhill for Partick Thistle as they looked to build on last week’s impressive victory in the highlands against Inverness Caledonian Thistle. In a game where Thistle had most of the attacking play it was a single goal which settled the contest in favour of the Doonhamers. Jags gaffer Ian McCall spoke to ptfc.co.uk shortly after the match.

“We did not deserve to lose that football match, that’s a given. I don’t think we necessarily deserved to win it but we had a lot of good attacking play. You saw Queen’s sitting in which I’ve no qualms with but we created a few chances that we should have scored. I think if we had got one the place would have went mental. We’ve got to improve the home form there is no doubt about that.

“The league is what it is. In the first half I felt there was no shape to the game really at all. I think Dobbie had one decent effort for them and Cardle had a few chances for us. In the second half I felt we were the dominant team particularly after they scored. It was just one set play that cost us. What we can’t do is get in the way of “it’s just not falling for us”. It didn’t fall for us 2 or 3 times but you have to make sure it happens and make sure it falls for us. There is a wee nervousness about Firhill and it is our job to stem that.”

The gaffer has only been in charge a couple of weeks but already he can see improvement within the squad.

“It’s a fresh start for everybody. I was very pleased with how we played in the second half . I felt we could have had more of cutting edge at times but that is the nature of this league. I think there might be one or two teams who stretch clear at the top but I think there will be six or seven teams fighting for everything else and every three points is going to be crucial.

“I think the squad are better than being bottom of the league. I think the confidence is the big thing. Confidence in any sport is a massive factor and if that is eroding then it is tough to go and play. We need to get that back. We’ve got to get big crowds back to Firhill and in the long term it will improve. I was pleased with how we played, we just didn’t have that last wee bit to add to it and we’ve got to add that.”

It was a set piece that separated the sides and Ian was disappointed that a fine margin cost the team at least a point.

“I made a point in my team talk that it might be one set play in these games and you’ve got to score it. We’ve got players who can go and attack it but it was a good header from their player. I thought our centre backs did very well today and we were defensively quite good, it was just one moment that cost us.”

A more in depth video interview with Alan Archibald is available to Jagzone subscribers now as well as Thistle players, Sean McGinty – log in to view.