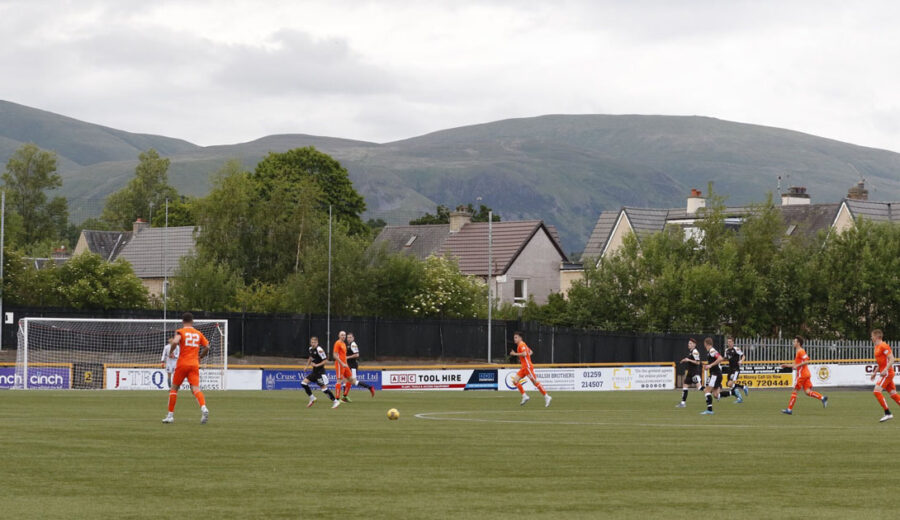 Just six days on from their first day of pre-season, Partick Thistle were back in action as they travelled to Clackmannanshire to take on Alloa Athletic at the Indodrill Stadium.

The game represented the first of four pre-season friendlies for the Maryhill men ahead of their Premier Sports Cup group stage opener against Stenhousemuir on 9th July.

Mason McCready started in goals for Ian McCall’s side behind a back four made up of Harry Milne, Darren Brownlie, Aaron Muirhead and Billy Owens. In midfield, the skipper Ross Docherty was alongside two youngsters in the form of James Lyon and Ben Stanway while the experienced Brian Graham led the line flanked by Cammy Smith and a trialist.

Perhaps predictably for a game so early in the summer, things started slowly. Ex-Jag Conor Sammon had a couple of half chances early on for the hosts with his header drifting well wide of the target before he then saw a deflected shot skip narrowly past the post shortly thereafter.

The Jags’ first real opening arrived in the 10th minute through last season’s top scorer Brian Graham. Billy Owens received the ball on the right side and quickly noticed the number nine making a run towards goal. Owens floated a teasing ball into the Alloa box which Graham met, however, he couldn’t keep his header down and the attempt flew over the bar.

Graham was looking Thistle most likely scorer once again after 14 minutes when he produced the game’s first shot on target. Some neat passing from the away side eventually worked the ball into the striker’s feet at the edge of the box. He then swivelled and fired a low shot towards the near post which the Wasps’ trialist goalkeeper turned behind.

As the half progressed, the away side’s grip on proceedings strengthened. The trialist wearing number seven for Thistle almost found a breakthrough with 10 minutes left in the half as he evaded two challenges before trying a powerful shot which flashed a yard or two wide of the upright.

Finally, after 20 minutes of control, Thistle found their breakthrough and they found it thanks to some swift passing which started on the left and moved over to the right where Billy Owens was stationed. The Thistle Weir Youth Academy graduate played a clever first time ball into the path of Cammy Smith who in turn drove a low ball towards the back post where Brian Graham was waiting. Having gone close a few times already, the former Ross County man was not to be denied this time as his right-footed shot wriggled over the line despite the goalkeeper getting a hand to it.

That second trialist almost had an instant impact as he found a route to goal in the 50th minute. Harry Milne fed a pass into Anton Dowds’ feet and the number 10 rolled the ball through to the trialist. Steven Lawless was making a run centrally but the number eight opted to take a shot on from the angle which was turned away for a corner.

However, as they searched for a second goal, the Jags were caught out defensively with Kevin Cawley grabbing an equaliser for the Wasps. The experienced wideman picked the ball up on the right flank and cut inside sharply, darting past a couple of defenders before curling an exquisite shot into the corner of Mason McCready’s goal.

The parity didn’t last long though with the visitors back in front 15 minutes later. A Kyle Turner corner was cleared as far as Steven Lawless who nodded the ball back to Turner on the right wing. The number six then drilled a bouncing ball into the goalmouth area which ended up in the far corner of the net. Whether it went directly in or whether it was directed in by Anton Dowds, who was in close proximity, seemed to be up for debate but for now the goal has been given to the former East Fife striker.

There was no doubt about whether the goal was his when the Jags made it 3-1 however. A smart pass into the box by Steven Lawless led to Zander MacKenzie being brought down by the goalkeeper and Thistle were awarded their first penalty of the season.

There were three claimants to the spot kick initially with Kevin Holt, Anton Dowds and Steven Lawless all keen but it appeared that Kevin Holt had won the debate being the last Thistle player to score a competitive penalty, but then a shout from the dugout by Ian McCall instructed Holt to pass on the responsibility to Anton Dowds who confidently buried the penalty into the bottom left corner.

It finished 3-1 as Thistle got their pre-season friendlies started with a win. More changes were made during the second half with impressive appearances for youth players Jamie Taggart and Gallagher Lennon.

Up next for Ian McCall’s side is another pre-season friendly against Kelty Hearts at New Central Park. That one is a 7:45pm kick-off and ticket information can be found here.