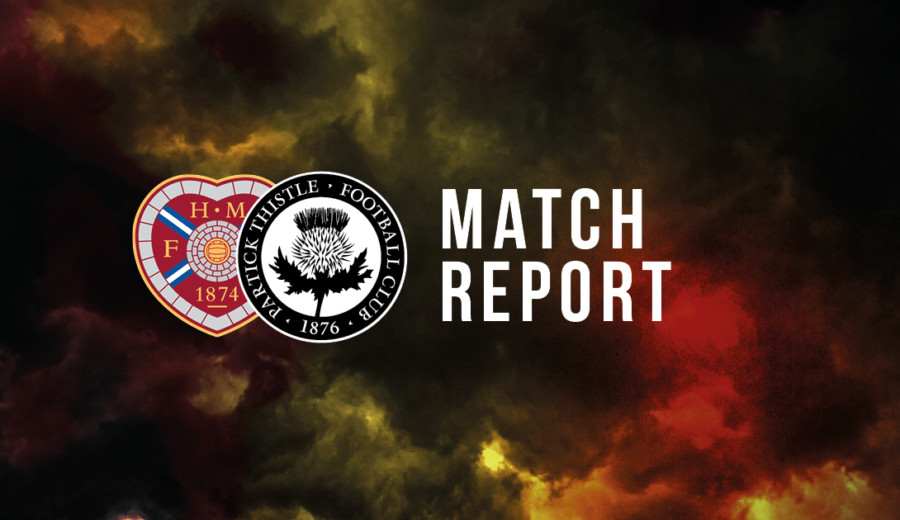 Having procured just one point from their last five matches, Alan Archibald’s Partick Thistle side would be looking to return to winning ways against Hearts at Tynecastle. The Jags had encountered their hosts once previously this season when the Jambos visited Firhill and managed to steal a late win thanks to a Tony Watt goal in the dying minutes of the clash.

Thistle boss Alan Archibald made three changes to the side that lost to Celtic last Friday night. David Amoo, Chris Erskine and Ziggy Gordon all dropped to the bench while Ryan Edwards, Danny Devine and Ade Azeez replaced them. The team took a three-at-the-back formation to begin the match with Osman, Welsh and Edwards creating a midfield trio. Ade Azeez and Kris Doolan played alongside each other from the start.

Abdul Osman led the Thistle team onto the Tynecastle pitch with the visitors wearing their all-white kit and Kris Doolan kicked the game off.

It took eight minutes for the first opportunity of the game to present itself. In all honesty, it wasn’t much of a chance to begin with as the ball fell to former-Jags man Prince Buaben around 30 yards out and he hit a speculative shot that ended up flying into the stands.

The next chance fell on the 14 minute mark and it was a chance for Hearts once again. Don Cowie whipped a free-kick into the Thistle box. The ball found Callum Paterson, who scored in the aforementioned game at Firhill earlier this year, and the Scotland international headed just a couple of feet wide of Tomas Cerny’s right-hand post.

Just four minutes after Paterson’s chance the Jambos were able to take the lead. Hearts full-back Liam Smith found space on the hosts’ right flank and he then crossed the ball into the centre of the box. The cross found striker Bjorn Johnsen who rose above Liam Lindsay to head the ball across goal, past Tomas Cerny to make the score 1-0 to the home side.

It took 42 minutes for the visitors to create their first chance and it came through left back, Callum Booth. The ex-Hibee was the beneficiary as Perry Kitchen cleared the ball with a poor header. The ball fell to Booth on the bounce and the defender hit a half-volley towards the near post. His shot took a slight deflection and only found the side-netting.

Despite showing some signs of life late on in the half, the score could have been a lot worse for the Jags at half-time. With just one minute left in the first period a cross from the Hearts right-hand side found Arnaud Djoum. The Cameroonian midfielder controlled the ball well before shooting but he was denied by an excellent save by Cerny. The resulting corner then found Igor Rossi who headed towards goal but the centre-half’s attempt crashed off the crossbar and was cleared.

As the half-time whistle went it was a feeling of relief for the Thistle men as they were lucky to be just a single goal behind Hearts. The home side had the lion’s share of the first half chances with a couple of good chances to double their lead that they couldn’t take.

When the teams re-emerged for the second 45 minutes Alan Archibald had made no changes but the Edinburgh side had. Midfielder Prince Buaben was withdrawn and replaced by attacker Connor Sammon.

Thistle needed to start the second half positively and that’s exactly what they did as the score was level just two minutes after the restart. Ryan Edwards was able to manufacture some space on Thistle’s left wing and cross into the box. The ball found Sean Welsh who headed low towards the near post and the midfielder’s attempt wriggled past Jack Hamilton, bringing the away side level.

The goal completely rejuvenated the travelling Jags side who suddenly seemed more fluid in their play. One could say this was down to the fact that Adam Barton was moved into the midfield at half-time, adding an extra body and something a bit different to the Thistle set-up. What was for sure, however, was that the goal marked the start of an impressive spell for the visitors.

10 minutes into the second period Alan Archibald’s side had the chance to take the lead in a game for the first time of the month when Ade Azeez was played in. The move started when Kris Doolan picked up the ball 25 yards from goal and slotted the ball through to his strike partner. Azeez then set himself before shooting but Jack Hamilton’s legs were able to deflect the shot away from goal.

The next man in red and yellow to go close was Ryan Edwards. The Australian unleashed a rasping shot from around 30 yards and although the shot seemed destined for the top corner it flashed just wide of the Hearts goal. Ade Azeez was taken off just after this chance and replaced by Chris Erskine in Archibald’s only substitution of the day.

With 14 minutes to go, Hearts had a rare second-half chance through Liam Smith. The man who set up the first goal almost grabbed one of his own as he cut past Christie Elliott before taking aim. The defender’s shot fizzled just a couple of feet over the bar, not causing Cerny any real trouble. Three minutes later Arnaud Djoum saw a tame half-volley of his saved easily by Cerny.

Callum Booth came extremely close to giving his team the lead when his half-volley ricocheted off the woodwork but even though the ball fell into the six-yard box, Ryan Edwards couldn’t turn it home.

In the 82nd minute substitute Chris Erskine had a good opportunity to complete the game’s turnaround. The ball was played to the midfielder before he skipped past his marker and released a shot which flew towards the corner of the net but Jack Hamilton was there to turn the ball behind for a corner. The resulting corner landed on the head of an unmarked Liam Lindsay and considering the centre-back’s recent goal scoring exploits he will be disappointed to have headed wide from about five yards out.

Only three minutes after that chance, Lindsay was at the centre of things again as he stopped a potential goal. Abdul Osman was dispossessed around the centre circle and the hosts had a favourable run on goal. Tony Watt was played forward and he had a one-on-one chance to go past Lindsay however as the forward entered the box, trying to skip past the number 4 the tall defender slid in heroically hitting the ball off Watt, winning a goal-kick.

The Jags still had time for one last golden opportunity to secure three points. Chris Erskine expertly dinked the ball through to Kris Doolan who made a perfectly timed run beating the offside trap giving him a chance to slot home. The experienced forward tried to place the ball past Hamilton but the Jambos’ goalkeeper blocked it with an outstretched arm.

In the closing minutes, Hearts dominated. They held a lot of possession but all they could do was launch high balls and crosses into the box but Thistle’s defence was resilient and aerially dominant allowing the Firhill side to hold out for the draw.

In the end, it was a god draw away at a bona fide top six side but after the second half showing many of the Jags players, staff and supporters would have felt that three points were deserved.

Alan Archibald must now plan for a midweek trip to Parkhead to take on a table-topping Celtic side at 7:45pm on Tuesday.