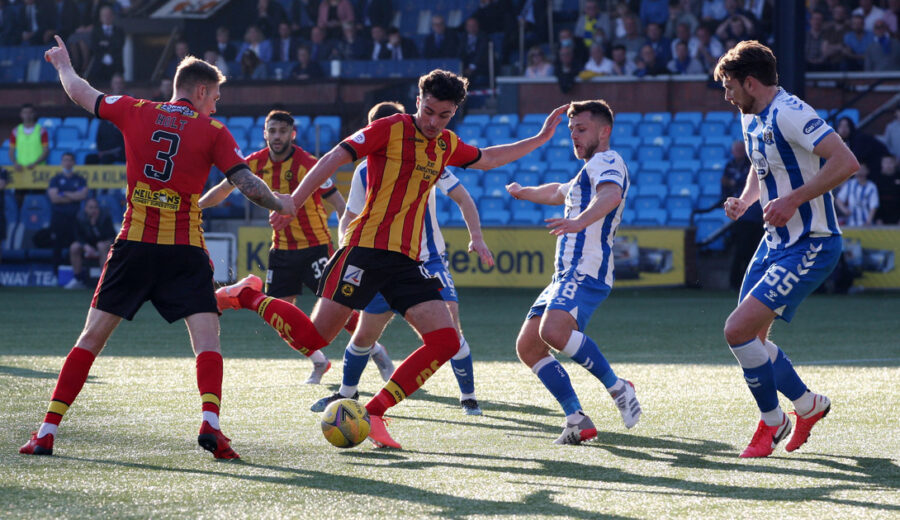 A hectic month of March ended for Partick Thistle with a trip to Rugby Park to face table-topping Kilmarnock for what could be the fourth and final time this season.

The Jags were looking for a result to end their results slump of three consecutive defeats while Derek McInnes’ league leaders were looking to continue their recent purple patch which has seen then undefeated in league action since 9th February.

Four changes were made by Ian McCall from the team which started at East End Park on Tuesday night as Thistle’s list of absentees only grew. Lewis Mayo, away on international duty, was replaced by Tunji Akinola while Stephen Hendrie came in at left-back in place of Richard Foster who dropped out of the squad. Kyle Turner came in for Robbie Crawford who was also missing while Cammy Smith dropped to the bench as Connor Murray returned to the starting line-up.

Things almost got off to the perfect start for the travelling Jags as Juan Alegria went close to a first goal in red and yellow. The Colombian picked the ball up around the half-way line and held off a couple of challenges to advance towards the Kilmarnock box. The route to goal opened up for him and he looked to find the bottom corner from 20 yards out, however, his effort skipped just pasty the post.

Not long after Thistle had their first shot on target as Scott Tiffoney looked to get involved. The winger got the ball on the left flank before cutting inside past Lee Hodson and trying his luck. His shot flew towards goal with plenty of power but was straight at goalkeeper Zach Hemming who saved with comfort.

A relatively bright start from the away side was snuffled out in the 21st minute as Killie hit the front with their first real threat on the Thistle goal. It was a free-kick, conceded by Thistle just short of 25 yards from goal which Kyle Lafferty stepped up to take. The Northern Irishman, who already had five goals in five Rugby Park league games since returning to Ayrshire in January, arrowed a near-perfect shot into the top corner leaving Jamie Sneddon with no chance.

That seemed to boost the hosts’ confidence and three minutes later they could have had a second. Oli Shaw pinched the ball off Ross Docherty in the Thistle half and slotted a ball to Kyle Lafferty on the left side of the box. The 34-year-old moved the ball onto his left foot then dragged a shot comfortably wide of the far post.

Right before the end of the first half, Thistle had a glorious opportunity to level things up. An in-swinging Kyle Turner corner flew towards the back post without Zach Hemming coming to challenge for it and that allowed it to find its way to Kevin Holt and Juan Alegria who were waiting on the far side. In the end it was the striker who got his head to it but he couldn’t find the target and it drifted back across goal and out for a goalkick.

Having ended the first period on a frustrating note, the second half would get underway in a similar vein for the Jags. Just 15 seconds after the restart, they would find themselves two down as Kyle Lafferty struck again. After giving the ball away at the half-way line, Rory McKenzie was given space to lift a cross into the box which found Lafferty and he wasted no time in controlling and firing a low shot beyond Jamie Sneddon to double the lead.

Then, just before the hour mark, Killie came very close to a game-killing third goal. A free-kick swung in from near the right touchline was won in the air by Ash Taylor as the former Aberdeen defender looked to guide a header back across goal, however, his attempt bounced back off the bar before being cleared for a corner by Stephen Hendrie.

This tried their best to find a route back into the game and they did get a goal back though it ended up coming too late. The goal was another from a Kyle Turner corner as he picked out the run of Ross Docherty allowing the Thistle skipper to knock it towards goal. It seemed like it would be cleared relatively simply by the Killie defence but a slight deflection on the goal-line took it past Zach Hemming and into the back of the net.

There was to be no dramatic equaliser, however, with the home side able to see out the win to extend their lead at the Championship summit.

For Thistle, they now look forward to a game against Arbroath at Firhill when they’ll be hoping to welcome a few absent names back to the squad. That one is a 3pm kick-off on 2nd April.