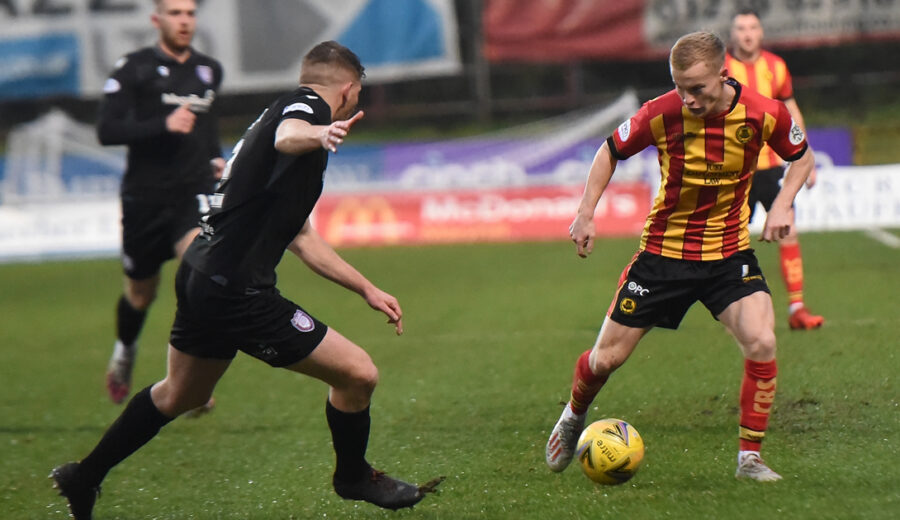 Partick Thistle sought to end a run of six games without victory against Arbroath as the Red Lichties visited Firhill for the Jags’ first home game of December.

Dick Campbell’s side were 3-1 victors in the sides’ previous meeting this season, coming back from 1-0 down thanks to two goals from Michael McKenna and one from Nicky Low.

Both teams came into this game off the back of goalless draws with Thistle having shared points with Queen of the South a week prior to this contest while Arbroath had battled to a stalemate against Raith Rovers.

In difficult conditions, the opening period of the game delivered little in the way of exciting football, however, the hosts burst into life in the 13th minute to force Derek Gaston into his first save of the game. Stuart Bannigan intercepted a Colin Hamilton pass and quickly got a counter-attack started by playing the ball to Scott Tiffoney. He hurdled a Michael McKenna tackle and fed the ball out to Brian Graham on the left side of the Jags’ attack. Graham then curled a pass over to the opposite side of play where Kyle Turner was able to bring the ball down. He cut inside, onto his left foot, and tried to beat Gaston at his near post, however, the ex-Morton ‘keeper was able to force the ball around the post in a somewhat unconventional manner.

Arbroath then hit back with a chance of their own on 18 minutes. Jason Thomson zipped a pass into the feet of Anton Dowds and the number 19 touched the ball around the corner for the onrushing Scott Stewart. The midfielder got away from Kevin Holt and raced into the Thistle box before trying a low shot across goal. The angle proved too tight though as Stewart dragged his effort wide of the far post.

The Championship’s top scorer Michael McKenna looked to add to his tally with 10 minutes left until half-time. The number eight struck a free-kick forcefully from 25 yards, looking find the near top corner, but Jamie Sneddon was across his goal-line quickly to make a relatively comfortable save.

The away side had the better of play latterly in the first half and that was rewarded on the stroke of half-time as they took the lead. James Craigen swung a corner kick into the Jags’ six-yard box and Anton Dowds escaped the attentions of Tunji Akinola to rise and header towards goal. The delivery had enough power on it to mean that he was only required to flick it onto the target and that’s exactly what he did, inflicting the first goal against Thistle since 15th October at the Fountain of Youth Stadium.

Coming out for the second half, there were signs of life from the Jags, most noticeably in the 48th minute. Kyle Turner chipped a free-kick into the Arbroath box finding the run of Lewis Mayo, free of his marker. The centre-half had found the net at the Bing End in Thistle’s last home league game but couldn’t do so again here as his header floated harmlessly into the arms of Derek Gaston.

The hosts carved out another opening three minutes later when Brian Graham looked to restore parity. Scott Tiffoney picked the ball up on the left wing and clipped a glided ball into the Arbroath area. Brian Graham rose to meet the cross but, like Lewis Mayo not long before, could only glance it into Gaston’s grateful grasp.

After that, the visitors came back into things and probably should have been two goals to the good with 54 minutes on the clock. Joel Nouble latched onto a loose ball on the right side of the Thistle box and cut it back to Scott Stewart in space. Having missed the target in the first half, Stewart made sure to make more of this attempt and his outside-of-the-foot finish looked bound for the bottom corner as soon as it left his foot. As the fans around Firhill were waiting for the net to ripple and Stewart to wheel away celebrating, Richard Foster popped up out of nowhere with a marvellous goal-line clearance to turn the ball away and keep the score at 1-0.

There was another golden opportunity for the Smokies to extend their lead one minute short of the hour mark and Scott Stewart was involved again. The former Airdrieonians man drove into the Jags’ box from the right flank and tried another low shot across goal. This one was parried by Jamie Sneddon but only to the feet of James Craigen. The midfielder, whose finest moment as a Thistle player came at that end Firhill against Morton in 2013, fluffed his lines with a first time shot as he put it wide of the near post from seven yards out.

Arbroath should have been left rueing their missed opportunities in the 62nd minute when Ross MacIver was presented with a big chance to get his first goal of the season. Scott Tiffoney clipped another one of his trademark cross into the Red Lichties’ box, finding Brian Graham at the back post. Thistle’s top scorer elected to knock the ball back across the face of goal as MacIver rushed in to meet it on the volley. The ex-Ross County man got good contact on the hit but fired it right off the crossbar and when the rebound fell to Kyle Turner, he couldn’t force it home.

That miss proved costly for Ian McCall’s side as Arbroath eventually got a deserved second through Liam Henderson. It was another set piece that was Thistle’s undoing though rather than a James Craigen corner, it was a Michael McKenna free-kick this time. The ball into the box was aimed towards the back post where Henderson was battling with his marker and the number 22 was able to get up to meet the ball, thundering a header beyond Jamie Sneddon to put his side into a more comfortable lead.

The Jags pushed for a route back into the game late on but, in truth, Arbroath looked the more likely to get the next goal as they picked their moments to attack. Joel Nouble had a couple of efforts that threatened the Thistle goal without hitting the target and Tam O’Brien struck the post with a drilled effort from 25 yards out.

The referee’s whistle went after three minutes of added time, confirming the victory for the travelling Smokies and condemning Thistle to just their second home defeat of the league season. The win saw Arbroath leapfrog the Jags and Kilmarnock into third place.

Up next for the Maryhill men is the visit of Raith Rovers who come to Firhill for the first time in the league since the 2012/13 season. Kick-off for that one is 3pm on 18th December.