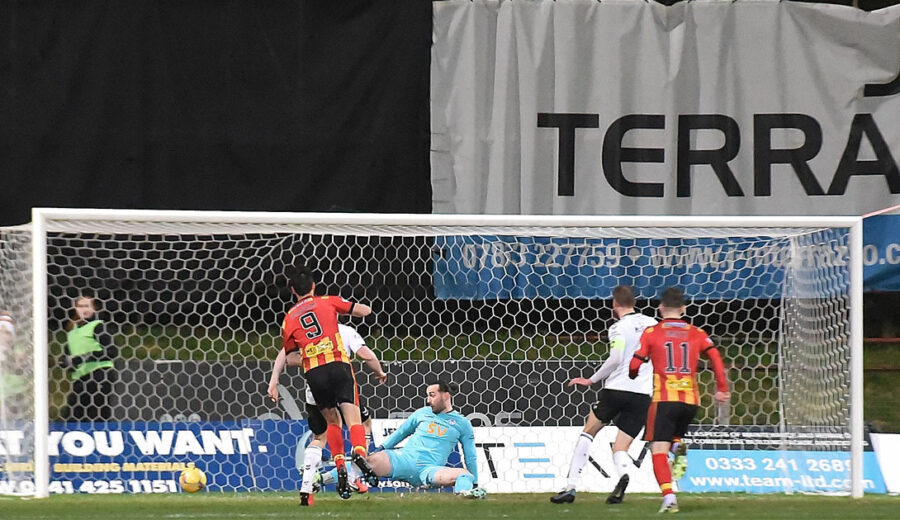 Partick Thistle were looking to continue their 100% record against Ayr United during the 2021/22 season as the Honest Men came to Maryhill for a midweek clash to open up February. The Jags were 4-0 winners in both of the sides’ previous meeting this term but the much improved Somerset Park side would be keen to get some revenge as they made the trip to Maryhill under new boss Lee Bullen.

Ian McCall made two changes to the side which beat Airdrieonians 1-0 in the Scottish Cup 10 days prior. Richard Foster returned to the side in place of Kevin Holt who missed the game with a slight knock while Robbie Crawford took the place of Zak Rudden who departed for Dundee on deadline day.

Neither team looked particularly threatening in the opening stages as the game settled down into a steady tempo and it took until the 25th minute for the game’s first real chance to appear. It came from the right flank where Ciaran McKenna swung in a dangerous ball towards the edge of the six-yard box for Brian Graham to attack. The number nine jostled his way past Jack Baird, powering a header towards goal which unfortunately was straight at Aidan McAdams who batted it away.

A minute after that, Thistle were in again. Robbie Crawford slotted a pass through to Cammy Smith who had found a gap in the Ayr defence and the number 11 looked set to get his second goal of the season but, knocked off balance by a recovering defender, Smith couldn’t force the ball past McAdams and the ‘keeper made another important save for his side.

Just as Thistle seemed to have found their attacking rhythm, Ayr caused them a scare at the other end. James Maxwell picked up the ball midway inside the Thistle half and turned to survey the options in from of him. He spotted Sam Ashford making a clever infield run from the right wing and he picked out the January signing with a curling pass. Ashford took one touch to control before driving a low shot towards goal which Jamie Sneddon had to get down sharply to stop. The loose ball bounced back out towards Ashford but Richard Foster was there first to clear it.

Coming out for the second half, it didn’t take long for the deadlock to be broken with Thistle making the breakthrough just six minutes after the restart. It was a well-worked goal instigated by Lewis Mayo as the defender played an excellent pass into the feet of Brian Graham to get the Jags moving up the pitch. Graham played it to Ross Docherty who in turn laid it off for Robbie Crawford. The former Ayr man then spotted Graham making a burst towards the penalty area and fed a well-weighted pass into the striker’s path. Thistle’s top scorer had three goals already this season against Ayr United and he continued to pile the misery on the Honest Men as he stabbed the ball into the bottom corner to put his side ahead and move him onto 15 for the season in all competitions.

In previous games this season, Ayr had capitulated after conceding the first goal but Lee Bullen’s side came back at Thistle after falling behind although they struggled to break down the resolute Jags backline. Even the loss of Richard Foster to injury didn’t seem to shake the hosts’ rearguard as Stephen Hendrie came on and got up to speed quickly.

As the game got closer to the final whistle there were a few sights of goal for the visitors. Firstly, on 81 minute, a Kerr McInroy shot was blocked and fell towards Andy Murdoch but the midfielder’s attempted first-time shot flew high and wide into the John Lambie Stand.

Alex Jakubiak came off the bench in the latter stages to make his debut for the club and he almost marked it with a goal. A high ball bounced away from Sean McGinty, allowing the on-loan Dundee forward to run onto it. He got to the ball 15 yards from goal and tried to fire a shot in quickly, however, McGinty had recovered well and was able to deflect the effort over the bar. He had another half-chance in the 85th minute when the ball fell to him just inside the Ayr box after a poor clearance but his snapshot flew comfortably over the bar.

There was some late pressure for the home side to deal with as Fraser Bryden and Kerr McInroy had shots from just outside the box but neither man could hit the target in injury time and the Jags saw the game out to take all three points.

The Maryhill men remained in fifth place, though they still have games in hand on every team in the league.