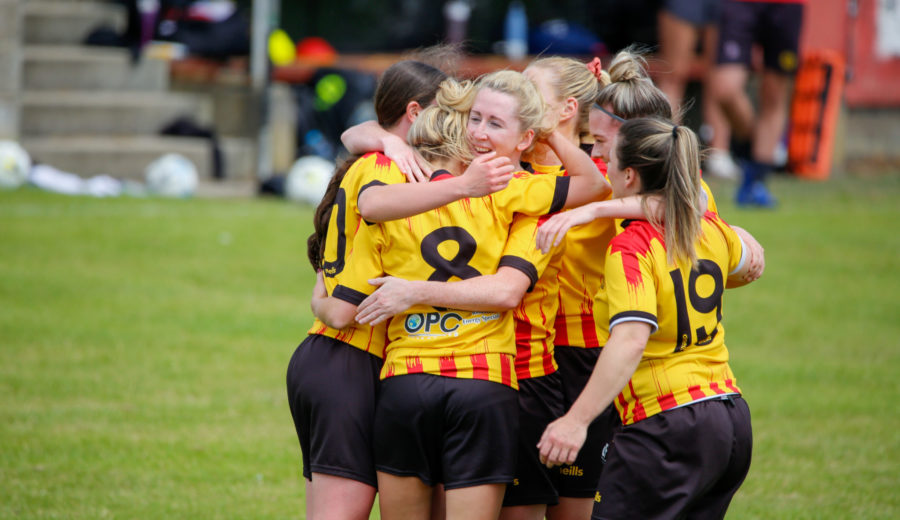 Thistle returned to SWPF2 action after a gap of close on six months and did so with a deserved 3-1 win over Boroughmuir Thistle.

Ahead of the resumption of action manager Brian Graham was able to add five new signings to his squad and of that five; Anna Vincenti, Cheryl McCulloch and Freya MacDonad all started against Boroughmuir on what proved to be a warm afternoon at Lochburn Park, home of Maryhill FC.

As deserved as Thistle’s win unquestionably was the three points weren’t secured without there being moments in the game that could have seen a very different outcome had things transpired differently. One such moment occurred just six minutes into the game, and in her first serious taste of action as a Jags’ goalkeeper Anna Vincenti provided the first hint of what a significant signing she might well prove to be as she made a sharp save to her left to deny Smith who looked set to open the scoring for the visitors who had already defeated Thistle this season.

Six minutes later Vincenti was called into action once more, this time showing a safe pair of hands and good positioning to save a Templeton free kick following a foul from Eleanor Smith almost on the very edge of her own penalty box.

By that stage Thistle were already beginning to assert themselves on proceedings and there was no real surprise when they opened the scoring on 19 minutes, nor that Clare Docherty was the scorer. Docherty at that point was operating as Thistle’s lone striker before later occupying a role on the right side of midfield, and playing on the shoulder of the last defender she looked a real threat. It was in excelling in that role that allowed her to open the scoring for Thistle with a shot that Ferguson in the Boroughmuir goal was able to get a hand to but couldn’t prevent from finding the net.

A lapse in concentration just two minutes after taking the lead nearly presented the Edinburgh side with an all too rapid equaliser but from 10 yards out Anderson lifted a shot over the bar when she should have hit target at the very least.

It was a costly miss for the Edinburgh side as Thistle netted a crucial second goal after 33 minutes and it was a debut strike for defender Cheryl McCulloch who cut across the penalty box from the right before steering a low shot into the bottom right corner of the net.

Leading by two goals to nil at the break, Thistle all but made sure of the points just two minutes into the second half. Docherty found herself pulled to the ground by the Boroughmuir keeper as a corner came into the box. The resultant conversion of the penalty was a sweet moment for captain Colette Fleming who had been missing through injury since just the third game of the current season. Her aggression and organisational skills have been much missed in the Thistle midfield.

Although the win now looked secured Boroughmuir were clearly not ready to concede the points and they were able to put the Thistle defence under some pressure. There were loud appeals for a Boroughmuir penalty for handball just seconds before Vincenti was required to make another good stop, this time denying Anderson.

With his team three goals to the good, manager Brian Graham was able to make a number of changes and one of his second half subs, Teigan McCann, fired over the bar after finding room for a shot at the edge of the box and Eleanor Smith really should have converted a Docherty cross at the back post as Thistle looked for a fourth goal.

The visitors, however, were able to reduce the leeway with just 9 minutes of the game remaining when Beth MacLeod angled a shot across the body of Vicenti that the keeper managed to get her fingertips to but couldn’t keep out.

A second Boroughmuir goal at this stage could have made things very nervy indeed for Thistle who held on to complete a winning return to action.

All in all this was a positive afternoon for Thistle. There were a number of accomplished
performances across the whole pitch most notably from new signings Vincenti and McCulloch and from captain Fleming, whose return almost feels like a new signing, and Docherty. It wasn’t all good news though with central defender Taylor McGlashan picking up a knock in the first half that forced Thistle into an early substitution.