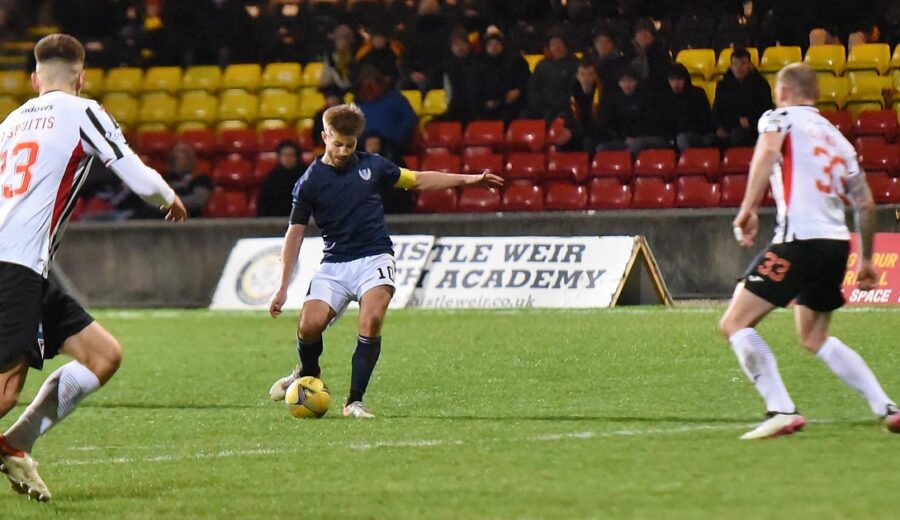 Partick Thistle’s remarkable run of clean sheets continued as they beat Dunfermline 1-0 in the Scottish Cup 3rd round to reach the club’s 17th straight fourth round.

The Jags came into the game against the Pars on a run of three straight wins and six straight shutouts having last conceded a goal exactly six weeks prior, against Hamilton Accies in a 6-1 win.

Ian McCall was forced to make two changes to his team as Lewis Mayo and Brian Graham missed out. Stephen Hendrie was drafted into the defence as Kevin Holt moved into central defence while Cammy Smith came in up front to play just off Zak Rudden.

Dunfermline came to Firhill with a renewed confidence under new manager John Hughes and Thistle found themselves under a bit of pressure in the opening minutes from two corner kicks. The first set piece was dropped right on top of Jamie Sneddon and, with a few Dunfermline bodies lurking, the goalkeeper wasn’t able to hold onto the delivery. Fortunately for the hosts, the ball didn’t drop to any of the nearby Pars but rather skipped away from goal.

The second corner kick was also an in-swinger from the opposite side as Dom Thomas sought to catch Sneddon out. This one went a bit deeper into the box and looked like it was going to drop into the goal at the far post, however, the ball crashed down off the bar before being cleared.

Thistle’s first serious venture forward came in the 17th minute as Ciaran McKenna looked for his first Jags goal. Mark Connolly made a poor headed clearance which Zak Rudden touched on to Cammy Smith. The number 11 then quickly slotted a pass across the edge of the box towards McKenna who struck it first time with his right foot. The defender did well to keep his effort low and on target but Owain Fon Williams was able to get down and hold the shot.

The Maryhill men were even closer to an opener on the half hour mark as Zak Rudden and Scott Tiffoney both had sights of goal. Tiffoney picked the ball up just inside the attacking half and moved away from two defenders before feeding the ball to Rudden in the box. After a slightly fortuitous bounce, Rudden was able to get a shot away, however, Fon Williams was able to close the angle sharply and make the save.

When the ball was then cleared following Rudden’s shot, it came to Ross Docherty just outside the box. He took a shot on which deflected towards Cammy Smith and the midfielder was able to control well before playing it to Scott Tiffoney. The number seven quickly let fly with a curling shot towards the far post but saw his attempt ricochet back off the woodwork, onto a defender and away for a corner.

Tiffoney was involved once again in the 53rd minute as Fon Williams was given more work to do. The winger got the ball on the left flank, bursting into the box after evading the challenge of Aaron Comrie and cutting the ball back to Cammy Smith. The ex-Aberdeen man took a good first touch before trying to pick out the top right-hand corner of goal, however, just as Zak Rudden was in the first half, he was denied by the goalkeeper as Fon Williams tipped it over the bar.

The breakthrough would eventually come in the 82nd minute as Thistle skipper Ross Docherty provided a moment of pure cup magic. A Jamie Sneddon punt fell to the feet of Graham Dorrans who was immediately pestered by Ross Docherty and forced to dribble back towards his own goal. A loose touch then allowed Ross MacIver to win the ball for the Jags as he poked the ball towards Docherty. The captain then opened his body up and bent a teasing shot towards the top corner. Owain Fon Williams, who had been Thistle’s bane all game long, stretched out his arm to tip the ball over the bar but Docherty’s shot had enough height on it to get past the Welshman and find the back of the net via the underside of the crossbar.

A couple of minutes later there was a chance for the away side to draw level as Nikolay Todorov tried to emulate his Firhill goal-scoring exploits from the opening day of the competitive season when he bagged a brace in Maryhill. The ball bounced into Ryan Dow’s path and the number 11 tried a low shot which only found his teammate Todorov, giving the Bulgarian the opportunity of a shot at goal from 10 yards. He tried to rifle an effort past Jamie Sneddon at the near post, however, Tunji Akinola was across swiftly to make the block and deflect the ball away for a corner.

With that, Thistle were able to see the game out and book their place in the fourth round of the Scottish Cup. Now the Jags turn their attentions back to league action and a trip to Palmerston Park to take on Queen of the South. Kick-off for that one is 3pm on 4th December.