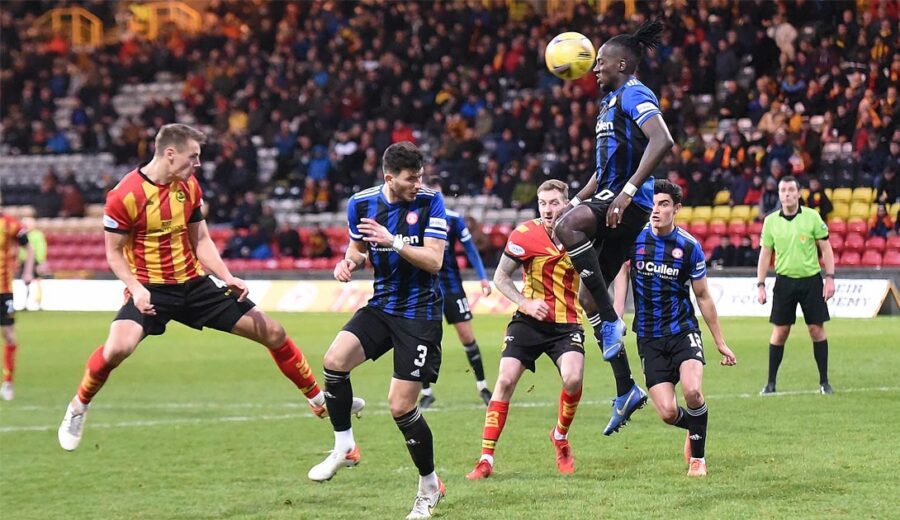 Partick Thistle looked to extend their unbeaten run in the league to eight as Hamilton Accies came to Firhill. Stuart Taylor’s side were hoping to avenge the 6-1 defeat the Jags inflicted upon them five weeks prior at the Fountain of Youth Stadium.

There was one change made by Ian McCall to the side which started the 4-0 win over Ayr United the previous weekend with Lewis Mayo, back from international duty, replacing Richard Foster who picked up a knock in training.

It was an extremely tepid start to the game as the two sides struggled to get the attacking juices flowing. Over-hit crosses provided the only semblance of excitement in the opening half an hour but thankfully things picked up a bit thereafter.

Thistle put Accies goalkeeper Joe Hilton under a bit of pressure after 31 minutes as a Ciaran McKenna long throw was sent into the away side’s box. Ross Docherty flicked the ball on and Hilton came to catch it, however, the number 23 spilled it under pressure from Brian Graham. Unfortunately for the hosts, no one was on hand to capitalise on the mishap and the danger was cleared.

Hamilton then came close a minute later as David Moyo who headed home from a corner in the 6-1 defeat last month almost did the same again. A delivery dropped into the back post area for Moyo to attack and the Zimbabwean striker managed to get his head to it. Lewis Mayo had tracked him closely though and was able to block the header at source, deflecting it behind for another corner kick.

Moyo threatened again in the 36th minute as he passed up the best chance of the game up to that point. A long clearance over the top of the Thistle defence was missed by Lewis Mayo as he raced back towards his own goal and that allowed Moyo a bit of time to control the ball and shoot towards goal. He had to take a shot on from a tight angle in the end but he still would have been disappointed with his attempt which veered well wide of the far post.

Following a relatively flat first 45 minutes, the second half began with a bit more energy and Accies could very well have been ahead on 50 minutes. Kieran MacDonald swung a left-footed cross in from the wing directly onto the head of Lewis Smith. The Hamilton number 11 was coming onto the delivery but could only direct his header a yard or so wide of Jamie Sneddon’s left-hand post.

Another MacDonald cross wreaked havoc among the Thistle defenders in the 54th minute. The former Raith Rovers man curled a lovely low ball across the six-yard box which made its way through to Andy Ryan at the back post. Ryan tried to squeeze a first-time shot into the back of the net but saw his shot hit the side-netting.

The visitors would be made to rue these missed opportunities when Thistle hit the front after 57 minutes. The goal came through the oft-used route of Kyle Turner’s corner kicks as the midfielder floated the ball towards Lewis Mayo who was 10 yards from goal. The number four expertly guided his header across goal and into the far corner of the net for his first professional goal, breaking the deadlock in the process.

There was almost a spectacular second goal six minutes later as substitute Cammy Smith was cruelly denied by the crossbar. A long kick from Jamie Sneddon was flicked on by Brian Graham to Cammy Smith and after a quick glance up at goal, the number 11 sent a looping volley over Joe Hilton’s head. The strike looked as if it was going to dip into the net, however, it ended up crashing down off the crossbar in front of the goal line.

After that chance for Smith, Hamilton began to control things as they pushed for a late leveller but the on-from Thistle defence weren’t for folding and were able to limit Accies to just a handful of half-chances.

As such, the Jags were able to hold out for the three points and a club record sixth consecutive clean sheet in the league. The win didn’t see Thistle move from fourth position, though it did bring them to within two points of the top of the table.

Next up for Ian McCall’s side is a Scottish Cup tie against Dunfermline Athletic at Firhill – their fourth meeting with the Pars already this season.