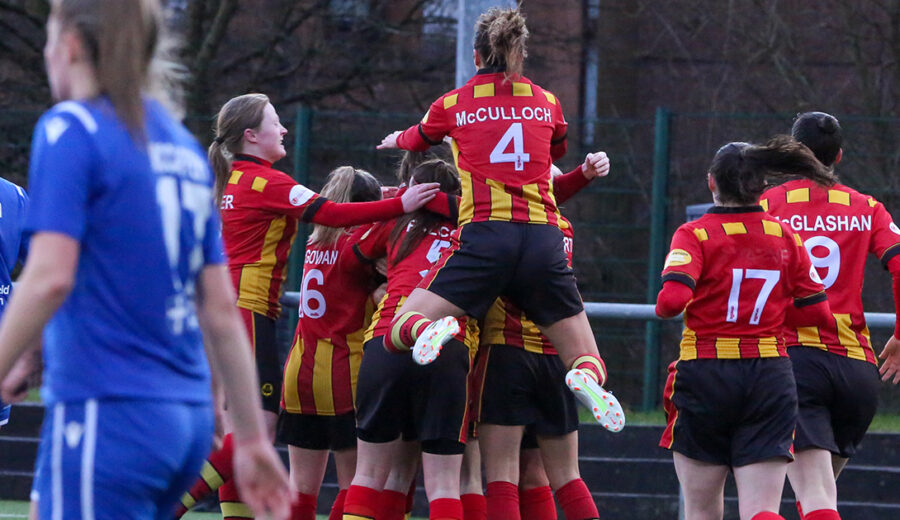 The BBC Alba cameras picked this game for live coverage and they won’t have been disappointed with the entertainment that the two teams served up on an afternoon where the weather conditions were often horrendous in nature.

Arguably the worst of the conditions came in the very opening exchanges and while it wasn’t the wind and rain that scored the Spartans’ opener inside the first 60 seconds they could certainly claim an assist. That though shouldn’t detract from the quality of Robyn Galbraith’s finish that left McGregor in the Thistle goal grasping at air.

At times in the opening minutes of the game Thistle struggled to get the ball up the field at all with one Slater clearance catching the wind and going behind for a corner.

Although McGregor had to produce a good step to deny Smart a second Spartans goal after 9 minutes the conditions did settle down to a degree and so too did Thistle.

Rachel Donaldson, on her full Thistle debut after a previous appearance as a trialist, was desperately unlucky not to mark the occasion with an equalising goal after 21 minutes when her header from a McBrearty corner was cleared off the line.

Donaldson though would only have to wait a further two minutes to open her scoring account as a Partick Thistle player.

It was again a McBrearty/Donaldson combination. On this occasion it was a McBrearty free kick on the left that provided the opportunity, and this time there was no preventing Donaldson’s header from finding the net.

Thistle’s tails were up at this point, Donaldson was only a fraction away from connecting with a low McBrearty cross just after the equaliser, but Spartans were close to restoring their lead when a McQuillan effort came off the Thistle crossbar.

It was the home side that were in charge at this point and Docherty forced Harrison into a good stop, though the flag did go up for offside in any case.

The game’s next goal did come the way of the home side however.

There were 35 minutes on the clock when Linzi Taylor found space inside the Spartans box and she was able to steer a shot beyond the reach of Harrison and into the corner of the net for her first goal as Partick Thistle player too.

It could have been even better for Thistle prior to the break had they been awarded what looked a clear penalty when Docherty was barged to the ground but much to everyone in red and yellow’s frustration no award was forthcoming and the opportunity to extend their lead just before half-time was denied.

Thistle were on the front foot in the early stages of the second half in search of that vital third goal. A low Donaldson shot was saved by Harrison and a Fleming effort from outside the box shaved the junction of bar and post on its way wide of target.

The best chance of a third Thistle goal though came the way of Docherty in the 68th minute but after a superb flowing Thistle move her final effort went agonisingly wide of goal.

Gradually though Spartans began to impose themselves more and more on the Thistle goal and a Galbraith effort had already come close when they were awarded a 72nd minute penalty following McCulloch’s trip on Mason. Galbraith emphatically slammed home the resultant and obvious penalty to once more tie the scores.

It was anyone’s game at this stage.

Fleming came close again with an effort that slid just wide of the goal, while at the other end Falconer had to head clear from near the Thistle goal line.

Substitute Rigden was quickly involved in the action when she came on and Harrison was grateful to be able to cling on to her shot from distance. The Spartans keeper again showed good handling a short time later when she claimed a Donaldson cross at her front post as Thistle searched for a late winner as conditions again began to deteriorate.

There would be no late winner though for either side and time was called on a highly entertaining 2-2 draw a point allowing Thistle to climb out of the bottom two in the league table.