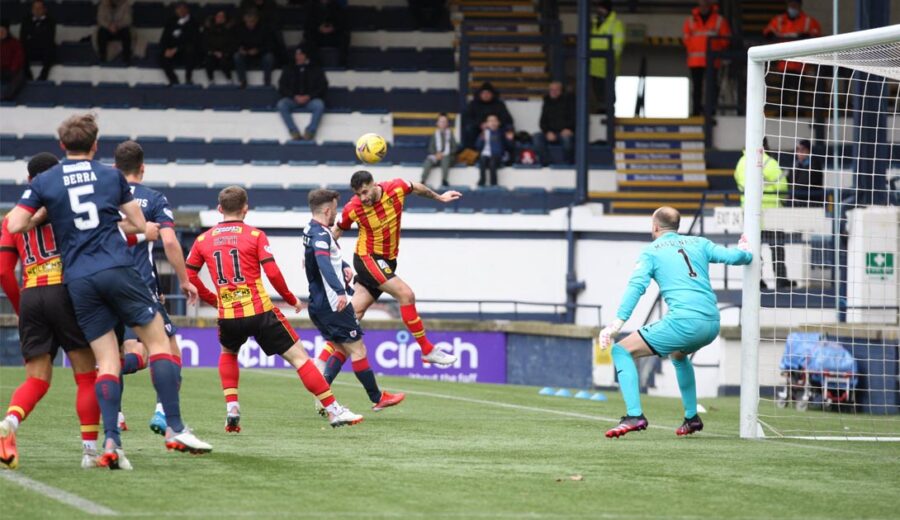 Partick Thistle had the chance to move into the Premiership play-off places for the third consecutive league match this weekend as they travelled to Kirkcaldy to take on Raith Rovers.

The two sides had each managed a win in the previous two meetings this season with the home side triumphing by the odd goal on each occasion. Thistle came into the game off the back of a midweek defeat to Greenock Morton while Raith were looking to end a nine-game winless run in cinch Championship action.

Ian McCall made three changes to the side lost during the week with Stephen Hendrie the first of those as he replaced the injured Kevin Holt at left-back. There was also a change at right-back as Richard Foster made his return in place of Ciaran McKenna. The final alteration saw a full Thistle debut for Kyle McAllister as team top scorer Brian Graham moved to the bench.

In blustery conditions, it was the hosts who had the better of the early goings. A tame free-kick from Dario Zanatta and a half-volley over the bar from Kyle Benedictus were warning signs for the Jags before they were properly opened up for the first time on 14 minutes. The attack came down the right as the ever-dangerous Reghan Tumilty burst forward before slotting a pass through to Ethon Varian. The on-loan Stoke striker then tried to square the ball but a vital tough from Tunji Akinola took it away from two waiting Raith players at the back post.

The home side continued to probe as the half went on and had further sights of goal before Thistle mounted any real pressure on Jamie MacDonald’s goal. A low drive from Ross Matthews made for a comfortable Sneddon save while a Sam Stanton effort from a low corner flew high over the bar.

Finally, after 36 minutes, the Jags had their first shot on goal and it was the skipper Ross Docherty who took the initiative. Picking up the ball in the Raith half, he marched forward into the space ten yards from the hosts’ box, unleashing a right-footed effort which forced Jamie MacDonald into a save before Dario Zanatta cleared the rebound.

Alex Jakubiak also had a pop at goal from outside the box towards the end of the first half, however, MacDonald was alert again and was able to get down sharply to turn the low shot away for a corner.

Ian McCall made a couple of changes at half-time as he looked to increase his team’s attacking threat. Brian Graham and Kyle Turner were introduced as Alex Jakubiak and Kyle McAllister were withdrawn.

The substitutions seemed to be working well for the visitors as they started the second period on the front foot. A quick, sweeping move saw them go from left to right in a flash before the ball eventually fell to Cammy Smith in the box. The former Aberdeen midfielder struck the ball across goal but Brian Graham wasn’t quite able to reach it for a tap-in.

Raith then came back into things and Tumilty was involved once again in the 57th minute. Connolly fed the ball into the full-back from the right wing and Tumilty let it run across his body before taking aim at Jamie Sneddon’s goal. He endeavoured to bend a shot into the bottom left corner but set his shot just too wide and saw it zip past the post.

The Thistle goal was threatened again just after the hour mark as a bit of miscommunication between Tunji Akinola and Jamie Sneddon gifted Dario Zanatta possession with Sneddon out of his goal. The goalkeeper recovered quickly, however, and by the time Zanatta had cut inside to shoot Sneddon was in a good spot to save his former teammate’s attempt.

Possibly Thistle’s best opportunity of the game came three minutes after that save as Brian Graham came close to a 14th league goal of the season. A Stephen Hendrie shot deflected straight to the number nine and he quickly swivelled and shot. Unfortunately, the ex-Raith striker couldn’t hit the target as his volley arrowed just over the bar.

The last big chance of the match came with 18 minutes to go as Dario Zanatta had another opportunity to haunt his old team for the second time this season. The number 11 was given the ball after Sam Stanton dispossessed Ross Docherty just outside the Jags’ box and he wanted to cut inside a fire into the back of the net. He was successful in the first part of that task as he moved away from one defender, however, a brave Lewis Mayo block meant the shot didn’t even get as far as Jamie Sneddon.

So the game ended scoreless with neither side able to find the crucial goal in the closing stages. With all five of the teams in top five drawing, it left things pretty much as they were at the top of the table with Thistle remaining in fifth.

Next up for the Maryhill men is a trip to Gayfield Park on Tuesday to face Arbroath. That one in a 7:30pm kick-off in Angus.