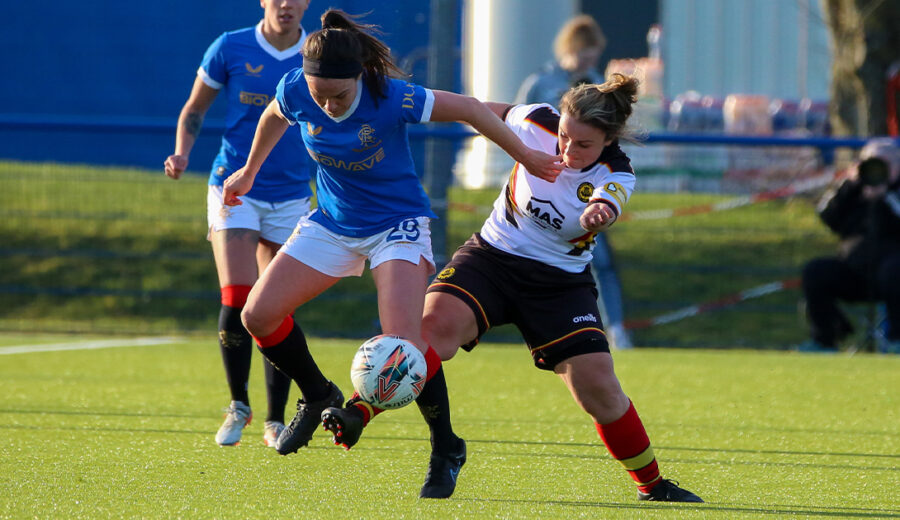 After an unbeaten February, Thistle made the relatively short trip to the Rangers training ground and the not inconsiderable challenge of facing the current SWPL1 league leaders. Ultimately it proved to be a comfortable win for the home side, but that owed more to the abundance of quality that Rangers possess than it did Thistle failings.

Coming into this game on the back of that unbeaten and successful run, this was a Thistle side brim full of confidence and the belief that installed saw them take the game to the home side, and they were rewarded for that positive approach with the game’s opening goal.

With five minutes on the clock Thistle forced two quick corners. The first of Cara McBrearty’s corners was scrambled clear but not her second which found the head of Linzi Taylor who for the third game in a row found the back of the net.

With an unexpected lead to defend it was important for Thistle to try and weather the immediate Rangers response and try and consolidate that advantage. Unfortunately the Thistle lead would last just 7 minutes.

An Arnot header has already been saved by McGregor but the scores were level just a few minutes later. A Ness shot came off the bar and McCoy was able to knock the ball over the line, despite the desperate intervention from Clare Docherty. Thistle appeals that the ball hadn’t crossed the line before Docherty cleared falling on deaf ears.

As the Rangers pressure mounted a Ness shot rebounded off the post with McGregor beaten but Rangers did nudge themselves in front after 28 minutes. This time Ness wasn’t to be denied by the frame of the Thistle goal as her effort from outside the box curled away from the reach of McGregor and into the net.

Although Rangers were the dominant side at this point, Thistle weren’t entirely out of it and a surging round down the right from Rachel Donaldson, who had picked up the ball deep inside her own half, offered hope but her end product didn’t match her run.

Thistle did look like heading into the dressing room at half-time trailing by just one goal but a goal deep into injury time changed the complexion of the game. A superb cross from the left from Vance was met by McCoy who headed powerfully home from close range.

Having conceded just before half-time so too did Thistle just after the restart essentially ending the game as a meaningful contest with McCoy completing her hat-trick as she steered a ball from the left into the corner of the Thistle net.

4-1 became 5-1 in the 72nd minute after McGregor pulled down Hay inside the box with Arnot converting the subsequent penalty.

Thistle were doing anything but throwing in the towel at this stage though. Donaldson had already forced Fife in the home goal into a save and Taylor was close to a second goal when she fired over the bar after a cross from substitute McCann had only been partially cleared.

Rangers, however, were able to extend their lead further when a flowing move ended with Arnot netting from 8 yards out.

There were some tired legs in the Thistle side at this point with manager Brian Graham making full use of his substitute bench to try and freshen things up.

In truth Rangers could have added to their tally before the finish. Twice the frame of the goal came to Thistle’s rescue with Lauren McGregor also pulling off a string of impressive saves before the full-time whistle sounded.