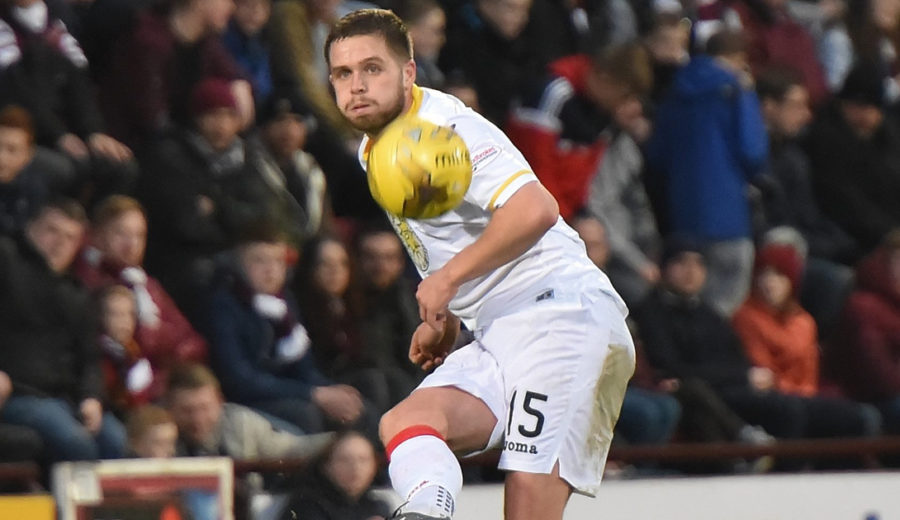 Devine: Second half display one of our best

Daniel Devine made his return to the Thistle starting line-up at Tynecastle on Saturday and didn’t miss a beat as he helped his side to a more than deserved point. On the way back along the M8 the big centre back spoke exclusively to ptfc.co.uk and gave us his reaction to the game.

“It’s great to get back in the starting 11 from a personal point of view but it is also bitterly disappointing to not have taken more from the match. We changed our shape a bit in the second half and it worked well for us. We created some really good chances and looked pretty solid at the back too.

“We’re pretty comfortable with that change of shape to be honest. It’s something we work on a lot so when it comes around you just need to get the right mind-set, concentrate and know that it is a change of shape that will play slightly different. We were a bit disappointed first half and felt we could have used the ball better but it was much better in the second 45.

“The shape worked really well and gave us a solid platform to go and build from. We were more brave and nobody was afraid to get on the ball after half time. I really thought we were going to win it.”

The Hearts goalie, Jack Hamilton, pulled out a number of world class saves to keep his side on level terms and Daniel could only stand back and admire the custodian’s performance.

“He’s done very well and pulled out a couple of worldies to be fair – he can be very happy with his performance. We probably should have done better with some of the chances we did have to be fair but sometimes you just can’t account for a keeper on form. He’s got them a point today.”

It doesn’t get any easier for Danny and his team mates as they now gear up for a trip to Celtic Park on Tuesday night.

“Listen, it won’t be easy, we know that, but there are a lot of positives we can take from today. Not many would have given us a chance today and we proved them wrong. We need to go into Tuesday night with the same attitude.

“Ask any footballer and they want to go and play on the biggest stages. We relish these games and if we can get every part of our game clicking then there is no reason we can’t go there on Tuesday night and take something.”