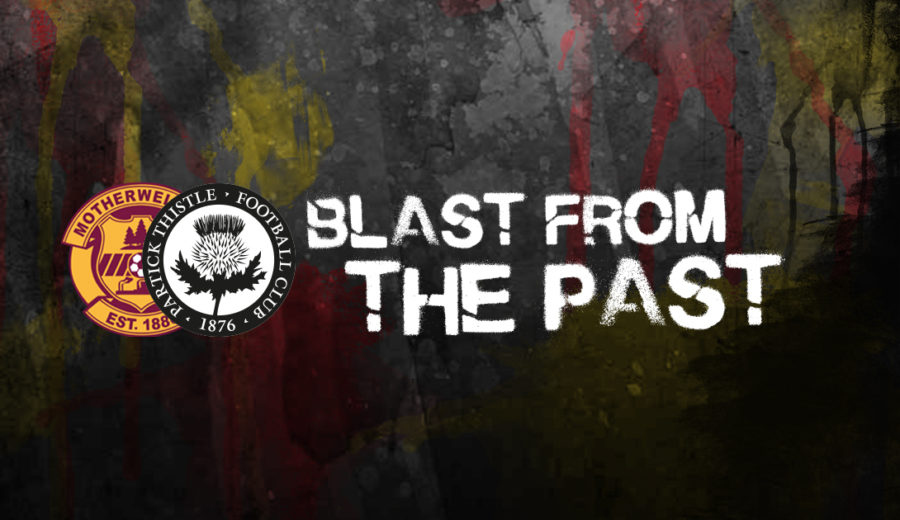 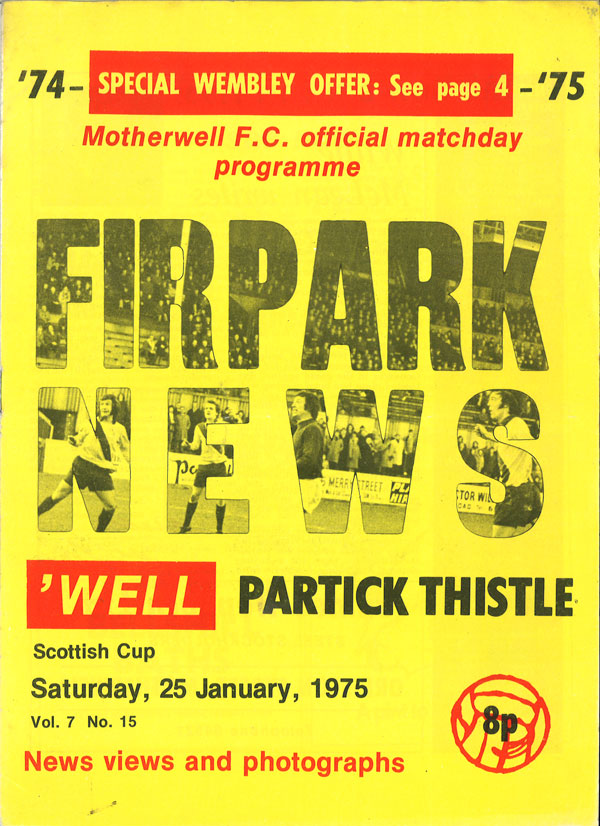 Our results from recent visits to Fir Park have been far from inspiring, although some of the performances have deserved better outcomes than those actually achieved. One thinks, for example, of that totally undeserved 4-3 defeat in 2014. This could have been described as the Kallum Higginbotham show. The poor fellow ran Motherwell ragged, scored two goals and still finished on the losing side. I remember winning 5-2 in a League Cup tie away back in the very late 50s at Motherwell, so we have had our moments. 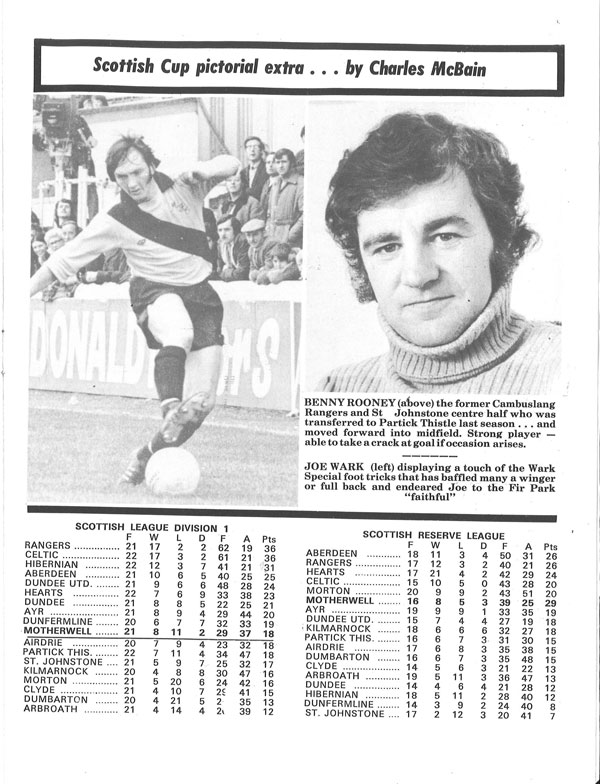 There has been a mixture of good and bad in Motherwell/Thistle fixtures, but the featured match provided a large helping of what can only be described as bizarre. First of all, with the game in its infancy(after 2 minutes to be precise) Sam Goodwin of Motherwell was ordered off – not quite the quickest-ever such incident, but not far off it. So Thistle would have 88 minutes in which they would capitalise – oh no they wouldn’t! After 23 minutes’ disaster struck. In a clash with the on-rushing Willie Pettigrew, goalkeeper John Arrol sustained a serious injury. Bobby Lawrie came on and Jackie Campbell went into goal. Only two substitutes were allowed in those unenlightened days, and it wasn’t normal practice to choose a goalkeeper for one of the slots. Could Jackie Campbell defy the Motherwell attack for 67 minutes? Of course he could, ably assisted by a courageous performance by the other Thistle players: – John Hansen, Robert(Nobby) Clark, Alan Hansen, Andy Anderson, Bobby Houston, Benny Rooney, Joe Craig, Dougie Somner, Denis McQuade, and of course Bobby Lawrie from the time of the Arrol injury. 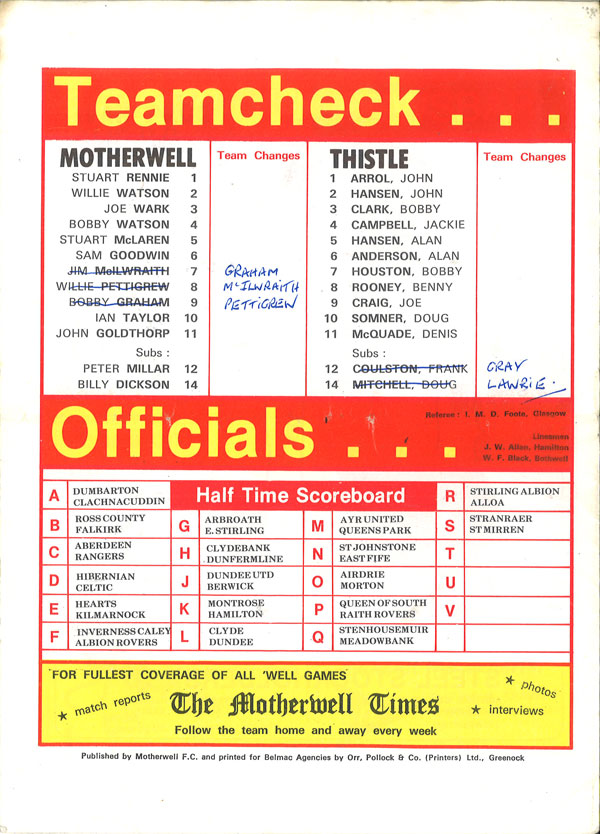 Thistle doggedly held out, so it was on now to a Firhill replay. Alan Rough would resume in goal, we now had home advantage, so all would turn out just fine. Oh no, it wouldn’t. We lost 0-1 to a late goal by defender Willie Watson. Such are the vagaries of football. We have been through it all so many times, so nothing should surprise us anymore. Having dug out a commendable result in the first game we couldn’t push on to victory in the replay. So 1975 wasn’t destined to be Thistle’s year for winning the Scottish Cup. Come to think of it neither has any of the 41 years since then. How about 2017? 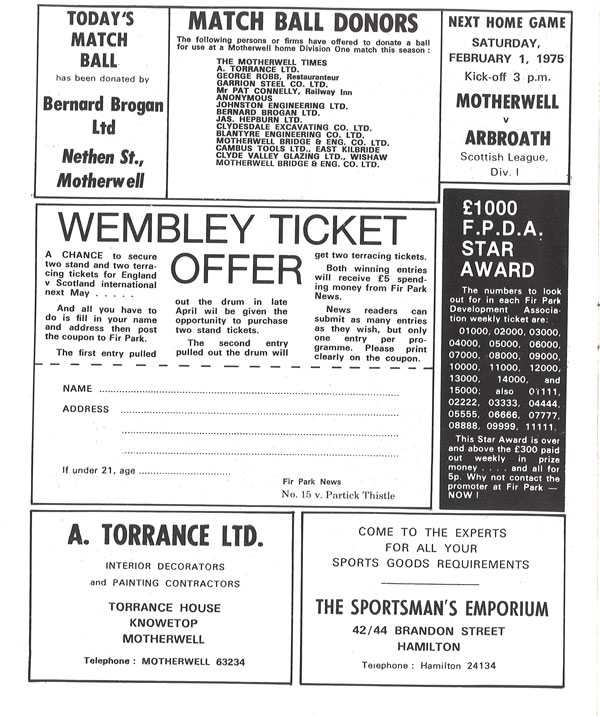 One has to say Motherwell produced an unusually large programme at the time. In case you are wondering what the special Wembley Offer on page 4 was, I shall tell you. By completing a coupon, entrants had the opportunity to purchase tickets for the England v Scotland international in May: – 1st prize two stand tickets, 2nd prize two terracing tickets and wait for it – both winners would receive £5 spending money. Well £5 was worth quite a lot in 1975. After all the featured programme cost the princely sum of 8 pence. How times have changed!