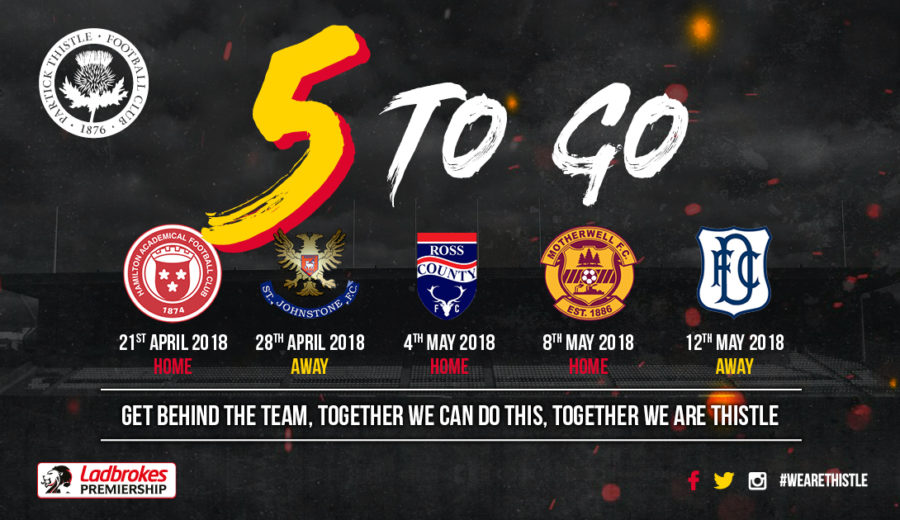 In recognitions of fans’ ongoing support, and to give as many supporters as possible the chance to get behind the team over this season’s five remaining games, the Board of Partick Thistle Football Club has today announced reduced price tickets for the first home game against Hamilton Accies and a special ticket package that will cover all of the final three home games. In addition the Club will also provide free supporters buses for the two away trips – St Johnstone and Dundee. Making the announcement, Chairman David Beattie, said:

“With the fixture list for post-split matches now out, the Board, management and players want to show their appreciation for the ongoing support you have shown the Club.

“The team now face the equivalent of five cup finals and the players must use their undoubted ability and determination to fight to keep this Club in the Premiership. To help them achieve that, your support has never been more important.

“So, for the two away games at St Johnstone and Dundee, Thistle will pay the full cost of supporters buses. For the three home games against Hamilton Accies, Ross County and Motherwell we are offering a three match package priced at £45 for adults and £30 for concessions.

“At our first home game – suitably to be played against Accies – there will be a range of tributes to the late great John Lambie, more details of which will be released closer the time. Ticket prices for this game will be £15 for adults and £10 for concessions.

“We hope that these initiatives will allow every fan who wants to see Thistle in these important games to do so. It is still all to play for so I’m calling on every Jags fan to rally behind the Club they love for one final push. Get behind our boys and be the 12th man that has been so important when the team has needed you in the past. Get behind the team, together we can do this, together we are Thistle!”

To take advantage of the three match ticket offer please phone the Club on 0141 579 1971 or come into the Executive Offices at the stadium which are open for ticket sales Monday to Friday 10am – 4pm. The deal will also be available from the office up until 1pm and from the ticket cabin thereafter on matchday ahead of the Hamilton Accies game.

Tickets for individual games can be bought online here.

Places on the supporters buses can be booked as normal and further details available below: