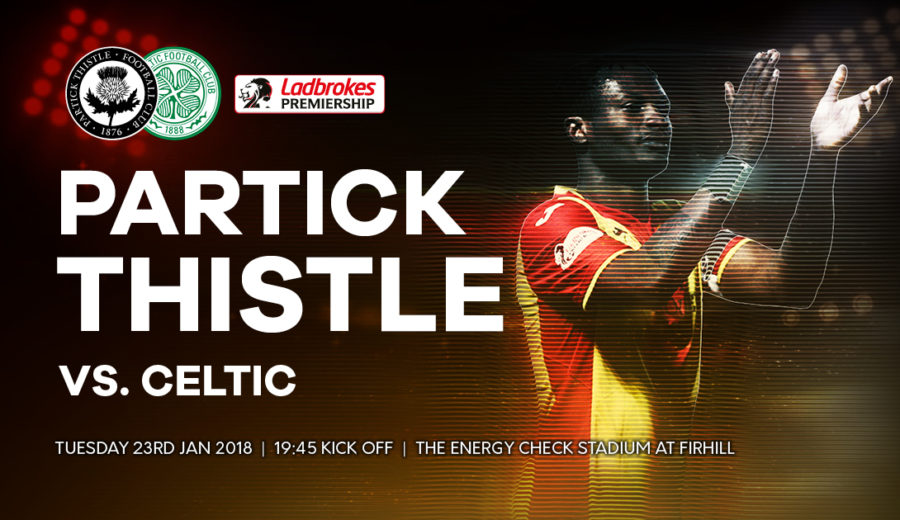 Abdul Osman made his long awaited comeback against Queen of the South in the Scottish Cup and now he is looking forward to getting back to league business as league leaders Celtic come to the Energy Check stadium at Firhill.

The skipper is feeling good after making his comeback and feels the mood around the camp is positive going into the tough test against our Glasgow neighbours.

Speaking to ptfc.co.uk Osman said: “We’re feeling positive going into the game. We are on the back of a good win at the weekend and we were on a good run before the break so we are feeling confident.

“We know what we need to do, we need to perform, we need to work hard and make sure everyone does their job. We know Celtic are a good team but we feel we are too.

“We need to stay organised and maybe have a bit of luck on our side but we feel we can get a result.”

Thistle are on a good run of form at home, five wins in the last six have moved The Jags off the foot of the table and Abdul is hoping to extend that run against Celtic.

“We are on a good run at home; we’ve picked up some good results recently and have been doing well. Hopefully we can take it into this game and continue that run.

“We got a draw against Celtic last season, so we know we can match them.. We saw what Hearts done to them, we know they can be beaten; we watched the video from that game and watched how to get at them.

“It gives the rest of a league a lift that they’ve been beaten, we know how good a team they are but if we go out and work, we press and everyone plays their part then I really believe we can get a result.”

The Thistle captain spent a number of months out with a  shoulder injury, finally coming back into the team on Saturday, he admits it was a tough test but he feels good.

“I’m feeling good, it was nice to come back against Queen of the South, it was a tough test and they done well, they gave it everything and we were up against it. However we managed to get the win and I got ninety minutes under my belt which was great.

“I’ve obviously got the odd ache and pain but that’s part and parcel of coming back from a long term injury. I just need to keep building up the match fitness but that will come as the weeks go on.”

Along with Osman, Callum Booth made his comeback from injury in the starting XI with Mustapha Dumbuya on the bench after his injury. Osman feels it’s a lift for everyone.

“It’s a big lift for everyone having a number of players back from injury. There was a lot of experience missing and the gaffer has had limited numbers. The boys that have been in there every week have been doing a great job, they’ve worked hard, they’ve played out of position and gave it their all, it’s good now to have more numbers and more bodies for the push towards the end of the season.”

The match against Celtic is the first league game after the winter break. The players spent a week in Spain during the break and Abdul feels it was an important time.

“The break was brilliant for everyone. Team bonding is important. We are together the whole week, there are no distractions, and you are together working all week, double sessions each day, you chill together, you eat together, it’s perfect for setting us up for the rest of the season.

“We did well after January last year and want to do the same again this year. We’ve got ourselves off the foot of the table. The boys done great and now with players back we are raring to go to try and keep pushing and try and get ourselves further up the table.”

More exclusive preview interviews with Niall Keown and Jags gaffer, Alan Archibald, are now available to Jagzone subscribers – log in to see them. Jagzone members will also be able to watch highlights of the game from midnight.