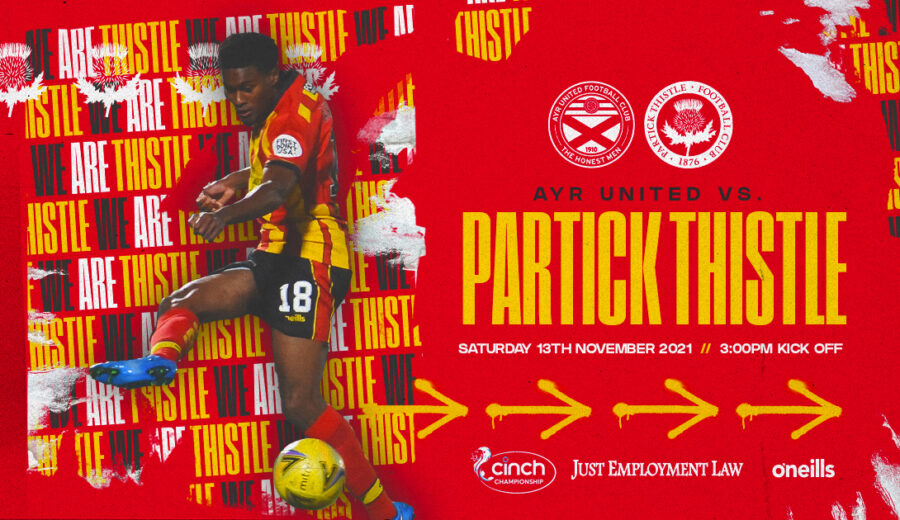 Partick Thistle make their second trip to Ayrshire in as many weeks as they head back down the west coast to face Ayr United this weekend. Thistle put four goals past the Honest Men when they visited Firhill in October but now head to Somerset Park where Ayr have lost just one of their last five league games. Thistle will relish the challenge, however, having made it four clean sheets in a row with a 1-0 win over Kilmarnock at Rugby Park last time out. They will be looking to make it five this weekend and defender Tunji Akinola spoke to ptfc.co.uk to look ahead to this weekend’s match:

“We know that going to Ayr will be difficult and I’ve been told it’s a hard place to go. Obviously whenever you beat a team convincingly you know they’re always going to want revenge so we know it’s going to be a tough game, but we will go down there and try to come away with another three points and a clean sheet.

“I always say that a clean sheet feels like a goal to me. I want to go into every game and come away with the clean sheet intact and that will give our strikers the best chance to go on and win us the game. Fortunately, we’ve got four clean sheets in a row but that won’t count for anything if we don’t win again on Saturday against Ayr.”

Tunji and central defensive partner Lewis Mayo have been at the heart of Thistle’s recent defensive success. However, with Lewis away on international duty this weekend Tunji will have a different man alongside him for Saturday’s match.

“Lewis will be a miss for us because we’ve really formed a good unit at the back over the past few weeks but we’ve got some different options to replace him. For example, I’d played beside Kevin Holt in central defence before Lewis and I started playing together and I know he’s a solid defender so if that’s the option the gaffer goes with he’ll step up and do his job more than capably at the weekend.

“I’m pleased for Lewis as well. He’s deserved the call-up because he’s been playing great alongside me in the backline.”

Last Saturday Thistle were able to take three points off Kilmarnock as an early Zak Rudden strike proved to be the winner but a fine defensive display in the second half capped off an excellent all-round performance for the Jags.

“Going into the Kilmarnock game I knew beforehand that Oli Shaw had scored a few goals, so it felt good to keep him quiet. They didn’t really have many chances in game either so that was another bonus for us. I’m confident going into any game that if we do our jobs, we will be a tough test for anyone in the league and with them being top of the league the result showed that we’re here to compete at the top end of the table.

“We showed in the Kilmarnock game that we can be right up there if we show consistency because Rugby Park is a hard place to go but we performed well. The season’s only a third of the way through but we know if we build on the consistency that we’ve shown in recent weeks I’m sure we’ll still be in the hunt.”

Exclusive video interviews with Thistle assistant manager Alan Archibald and Connor Murray will be available for JagZone subscribers to watch today – log in to view.

JagZone subscribers will be able to tune in to live audio commentary for our clash with Ayr United, starting at 2:30pm – click here to tune in.